Hands On at the Instant Ramen Museum

The Momofuku Ando Instant Ramen Museum is a fun day for the entire family in Ikeda City, north of Osaka. It's surprisingly interactive and even has a "Hands-On Workshop" where anyone (if they book ahead) can make his or her own pack of instant ramen.

It looked fun on its website: a museum dedicated entirely to instant ramen built by the man who invented it: Mr. Momofuku Ando.

Mr. Ando (1910-2007) was the founder of Nissin Food Products. Nissin was founded in 1948 as Japan was recovering from World War II. Instant ramen was invented in 1958 and cup noodles in 1971. His personal mission was to feed Japan. Today Nissin feeds the world.

As exciting as the history is, I focused on the Hands-On Workshop: my chance to make my own instant ramen. Reservations were weeks in advance but that didn't stop my girlfriend and I. Our day came and we made our noodle.

The idea of instant ramen is simple: add hot water then wait a couple minutes. That's it. Some people like to add an egg or other ingredients but it isn't necessary.

Cup noodles is just as easy. Open the cup package half-way then add hot water. Close the cup and wait a couple minutes. That's it. Most people don't add other ingredients because everything they want is already in the cup, dehydrated.

Do you love instant ramen? 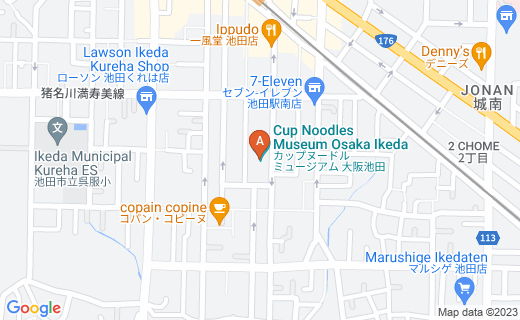 Just a few blocks from the station!

The museum: it's weird and fun

The Instant Ramen Museum is weird and fun. It has many exhibits and shows the history of instant ramen. Much of it is interactive. There is a lot to touch and play with. Children and ramen enthusiasts will love it.

It has exhibits such as the "Instant Ramen Tunnel" which is makes up the entire left wall the moment you walk in. It shows many of Nissin's instant ramen and cup noodle product packages over the decades. You'll see how much product designs and artwork have changed over the years.

The "Birth of Chicken Ramen" is impossible to miss. It's right in the middle of the first floor. You'll see it immediately. This is a reproduction of the shack behind Mr. Ando's home in Ikeda where he experimented with different frying and flavoring techniques before he made the first instant ramen.

In the next part of the museum there is a small theater that shows the history of Nissin and instant ramen. Following that is the part nobody misses, "My CUPNOODLES Factory." Here you can design your own cup with markers. Then choose a soup flavor (such as chicken or curry) and four ingredients (such as shrimp or pork).

Everyone makes his own cup noodle. For 300 yen, you're part of the action from beginning to the end. There are cranks and levers and small windows you can look through as your own cup noodle makes its way from beginning to end. With the number of soups and ingredients there are literally thousands of combinations. Here is a great example of this in action.

One warning: hit up the "My CUPNOODLES Factory" as soon as you start, especially if you visit on a weekday. You can see everything else afterwards. Schools all over the area love taking their children to the museum and if your timing is off you can be waiting behind almost fifty students. Fifty! Children are everywhere in Japan, especially when you're sightseeing.

I usually don't mind waiting but today was different. Today I was scheduled to make my own instant ramen.

Hands on at the Instant Ramen Museum

The kitchen was sparkling clean. There are eight tables and six of us were seated at each table. We put on our chicken ramen aprons and chicken ramen bandannas. The bandannas were given as souvenirs at the end of the workshop.

After a quick lecture about Nissin instant ramen, there was a video about the same. During the video we were able to design our packages with markers. There were a few breaks during the process where we were given more time to focus on the design.

Soon after washing our hands, we were given ramen flour and an oily liquid to mix it with. This is where things got exciting. After mixing, we rolled the dough--without rolling it. See, we took our rolling pins and pushed down on the dough. It was pressing our dough then folding it, never rolling.

With our dough perfect, we put it into a kind of grinder/flattener. We cranked it by hand: this adjusted the thickness (or should I say the thinness) of our dough. Once that was complete, we took a short break to let the dough rest.

Here the staff takes control. They took our noodles for steaming in another kitchen behind a glass. Once our noodles were steamed, they sprayed them with sesame oil and poured on the soup flavoring. Finally, they flash-fried our noodles and packed them in the packages we designed. And that's it!

Most of the time my hands were covered in dough or I was busy pressing or cranking it. Unfortunately I didn't have time for more pictures.

The experience: perfect for any ramen lover

I'm not much of a cook but the ramen workshop was the most fun I've had in a long time (I'm over 30 years old)! It was an amazing experience. I went home with ramen I made with my own hands and there is no other ramen like it. It all took about an hour and a half. Anyone can do this but remember, you need a reservation. Also there are a few other things to remember...

The workshop is closed on Mondays and Tuesdays (except when these fall on national holidays). The workshop fee is 500 yen for adults and 300 yen for children. You'll need to understand Japanese. Fortunately my girlfriend helped me out here. Also, oddly enough, reservations are made in pairs or even-numbered parties.

In the meantime, take look at our final product below!

The Instant Ramen Museum is very easy to reach from Osaka. On the Hankyu Takarazuka line, get off at the Ikeda station. Head south on "Noodles Road." The museum will be on your left. It's impossible to miss.

The museum is closed on Tuesdays. It is open the rest of the week as well as national holidays. Hours are 9:30am to 4:30pm. Admission is always free!

"Peace will come to the world when the people have enough to eat." - Momofuku Ando

Momofuku Ando created a company that fed a post-war nation while it was starving. Today it feeds the world. The history of Nissin is a history of modern Japan. As quirky and fun as the museum is, peace and food are important themes I'll always remember.

I hope you had as much fun as I did!

Do you want to visit the Instant Ramen Museum?