The Victorian who built a town

On the 17th August 1861 the first steam train pulled into Saltburn-by-the-Sea. For one man, Victorian railway owner and politician Henry Pease, it was the realisation of a vision, a dream come true. A new town, a 'railway town' built from nothing on the cliff tops of the North Yorkshire coast. Today Saltburn-by-the-Sea celebrates its anniversary 150 years, a small but vibrant seaside resort with a population of around 6,000 people.

From Early Beginnings - The Popular Story of Saltburn's Foundation

According to popular story one day whilst walking the coast between his brother's house and 'old Saltburn', a fishing hamlet by the sea of no more than a 'smugglers inn' and a handful of fishermen's cottages, Henry Pease was inspired by a vision to build a town on the cliffs above. Iron stone had previously been discovered in the nearby hills and the Pease family had played an important role in developing Middlesbrough only 13 miles away as an industrial centre.

Land was purchased from the Earl of Zetland, surveyors commissioned to design a town layout and his fellow directors of the Stockton and Darlington Railway company persuaded to extend the line.

Streets of terraced houses named after gemstones, Coral, Garnet, Ruby, Emerald, Pearl, Diamond and Amber, were built all with sea views. A 'railway' hotel with its own private platform, The Zetland Hotel, was finished in 1863. A pier with a landing stage for steamers was constructed and opened in 1869. The elegant Queens Hotel followed in 1875.

In the early 1880s a cliff lift, an inclined tramway running from the beach at the bottom to the town at the top, was built to replace an earlier cliff hoist. Ornamental Italian gardens were laid out with walks through a wooded valley. Saltburn by the Sea had become a popular and elegant seaside resort.

The dream was complete.

Saltburn by the sea 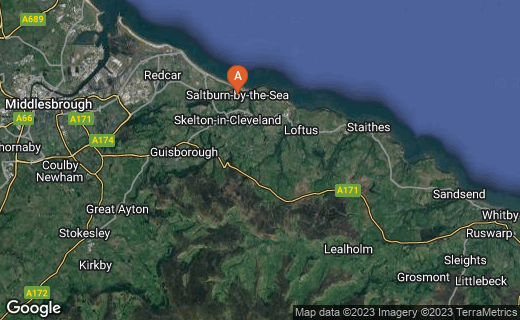 Oh I do like to be beside the seaside

As part of the celebrations local community artists Helen Gaunt and Derek Mosey have been creating and unveiling a series of mosaics (with the help of 2000 residents!)

Five commemorative panels now adorn the exterior wall of the local supermarket in the town centre next to the station. Below are just a few pictures showing some of the detail in these mosaics.

Did you know - Saltburn Surf School The only approved Performance Surf School on the UK's east coast!

With its wide sweep of sand, donkey rides in summer and backed by a promenade the beach is popular with families and surfers alike. In fact it is has now been named as one of the UK's top 10 surfing hot spots.

Retaining much of its original Victorian charm Saltburn is a delightful place to visit today. A haven for artists and lovers of the great British seaside. A favourite destination for walkers and cyclists.

The pier, now half its original 1400ft length, is the only remaining pier in the north east of England and makes a great viewpoint to look back on the town and up and down the coast.

The cliff lift, the oldest working water powered funicular in the country, still transports visitors from the beach and lower promenade to the town above. There in a series of well laid out streets a variety of interesting shops, cafes, restaurants, bars and hotels can be found.

Alternatively walk through the valley gardens, or take the miniature railway to enjoy the wooded valley, stream and ornamental gardens.

For those wishing to venture further afield there are delightful cliff top walks. Behind the old smugglers Ship Inn lies Huntcliff, towering cliffs where the Romans built a signalling station rising to more than 365 feet. An energetic climb but well worth it for the views over industrial Teesside to the north and southwards along the Yorkshire coast to Staithes.

The Saltburn Pier Company was formed in 1867 to provide a landing stage for coastal steamers to disembark passengers from Hartlepool, Middlesbrough, Whitby and Scarborough. Opened in 1869 the pier was constructed from iron with timber decking, was 1500 feet long and illuminated by gas lighting with two kiosks at the pier head.

Over the decades the pier has been damaged by storms, suffered collisions from shipping and had sections removed to prevent invasion from German troops during World War II.

Today Saltburn pier is the oldest and only surviving pier on the north east coast, although it is considerably shorter at 681 feet and no longer used as a landing stage. It was voted Pier of the Year in 2009.

Opened in 1884 this water powered funicular 'inclined tramway' has transported people 207 feet along a track, originally in wooden cars with stained glass windows, from the lower promenade to Marine Parade and the town 120 feet above at the top of the cliff.

Each car is fitted with a 1000 gallon water tank and linked to the other by steel cables. When the tank of the car at the top of the tramway is filled with water and becomes heavier than the car at the bottom, it descends pulling the other car up to the top.

For over 100 years the Halfpenny Bridge was Saltburn's most famous and iconic landmark. Alas no more!

In1869 an iron bridge was built on 7 trestle supports to span the Valley between Saltburn and the road to Skelton, the purpose being to avoid the steep Saltburn bank which was difficult for horse drawn carts to safely negotiate with heavy loads. At a cost of Â£7000 the bridge was 660 feet long, 18 feet wide and 160 feet high at its mid point. The toll to cross the bridge was one half penny. Not designed to take 20th century motor vehicles and reduced to pedestrian traffic only the bridge gradually fell into disuse and disrepair. Finally in 1974 the bridge was blown up and demolished. All that remains today is the toll keepers cottage on the Skelton side, and an observation platform and bandstand erected where the Salthurn toll booth once stood.