The Seattle to Bainbridge Island Ferry

A Ferry Trip Across Puget Sound

As a resident of the Seattle area, one of my favorite things to do is to take a trip on a Washington State Ferry across Puget Sound to Bainbridge Island. The ferry departs approximately every hour from the terminal at Colman Dock on the Seattle waterfront and for me is a great way to relax and get an attitude adjustment.

The journey takes approximately 35 minutes each way and offers spectacular views of the Olympic Mountains, Cascade Mountains, Mt Rainier, ships passing by and a totally different view of Seattle from Puget Sound. Upon arriving at the dock on Bainbridge Island, all passengers disembark and can immediately re-board the ferry for the return trip to Seattle or enjoy some of the sights of Bainbridge Island and return on a later ferry.

The Bainbridge Island ferry route is the most heavily used in the Washington State Ferry system and is serviced by two of the largest and newest vessels in the fleet - the Wenatchee and the Tacoma.

All photos by the author, Vicki Green - PNW Travels, unless otherwise credited.

Beginning the Voyage to Bainbridge Island

The journey to the island begins at Colman Dock located on Seattle's Pier 52 at 801 Alaskan Way toward the south end of the Seattle Waterfront. Another access point is a convenient pedestrian walkway and overpass across Alaskan Way that can be found by walking west along Marion Street from 1st Avenue.

Have you ever taken the ferry to Bainbridge Island?

Where is the Ferry Dock? - A Map Showing the location of Colman Dock on the Seattle Waterfront 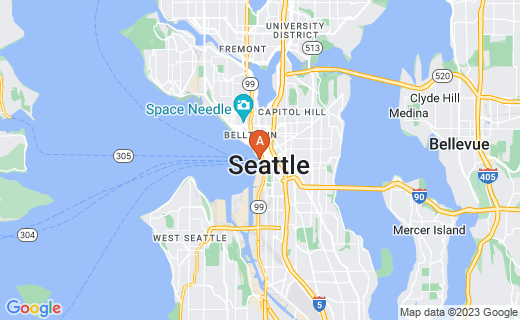 The Washington State Ferry terminal in Seattle is on Colman Dock at Pier 52.

About the Washington State Ferry System

Upon entering the Seattle Ferry Terminal at Colman Dock, the wall along the ramp has a mural of old photos showing the time-line and history of ferries as a mode of transportation in Washington since before 1900.

In the late 1940s, increasing costs made it unprofitable for the Puget Sound Navigation Company to continue to operate the ferry system. Since a reliable ferry service was a necessary transportation need for so many communities, the State of Washington purchased nearly all of the facilities and ferries from the Puget Sound Navigation Company 1951. The only route retained by the Black Ball line was the Port Angeles to Victoria, BC ferry. The purchase of the ferries and docks was intended to only be a temporary solution that would be managed by the newly created Washington Toll Bridge Authority. The plan was for the Washington State Highway Department to build bridges to the areas serviced by the ferries to be paid for by bridge tolls.

Largest ferry system in the U.S

Passenger fares are only paid in the westbound direction from Seattle to Bainbridge Island. The eastbound trip from Bainbridge to Seattle is free! Passengers may purchase their ticket at the ticket window inside the passenger terminal or purchase tickets in advance online. Walk-on passengers should arrive 15 minutes before the scheduled ferry departure time to allow adequate time for boarding. Vehicle fares are considerably more expensive. Tickets for vehicles and their passengers can be purchased online or at a drive-through ticket window at the dock. Washington State Ferry Wenatchee - Statistics and facts about the Wenatchee

About the Wenatchee Ferry

The Wenatchee (Wen-at'-chee - rhymes with "when AT sea") is one of two ferries that serves the Seattle to Bainbridge Island route. The Wenatchee is one of the newest and largest vessels in the fleet of Washington State Ferries. The other ferry that usually services the Bainbridge Island route is a sister ship of the same class named the Tacoma. Here are the stats about the Wenatchee obtained from the Washington State Ferries website:

The Upper Deck of the Wenatchee

After boarding, I was greeted on the upper deck by a Glaucous-winged gull who was either hoping for a hand-out or was considering taking the voyage from Seattle to Bainbridge Island on the ferry. He must have decided to stay in Seattle, because he flew off shortly after I took his picture.

The Sundeck on the Wenatchee

The Passenger Decks on the Ferry

View of the Space Needle

About midway across the sound we passed the Puyallup (pronounced Pew "AL" up - with the "a" as in apple), another Washington State ferry that is a sister ship to the Wenatchee. The Puyallup is also a Jumbo Mark II class and among the newest ships in the Washington State Ferry fleet.

The Galley On the Wenatchee

Food and Beverage Service on the Washington State Ferries

Food and beverages are available in the galley of the ferry on the main passenger deck. Food choices include sandwiches, salads, and snacks. Beverages include coffee, tea, milk, juice, bottled water, soft drinks, beer and wine.

There is plenty of seating available on the main passenger deck. There is a variety of seating options, including comfortable chairs, large benches along the windows areas with tables for eating, working, reading or playing cards. The ferry is also conveniently equipped with a Wifi internet connection making it easy for commuters to use their laptops while riding the ferry.

Disembarking the Ferry on Bainbridge Island

For security reasons, all vehicles and passengers must disembark after the ferry arrives at the dock. Passengers exit via the Passenger ramp and can get in line to re-board for the return trip to Seattle immediately or explore Bainbridge Island and return on a later ferry. There is no ticket for to buy at the Bainbridge dock since fares are not collected for passengers traveling in the eastbound direction to Seattle. Fares for vehicles are charged in both directions.

Visit the Gardens at the Bloedel Reserve

Take a Tour of the Bloedel Reserve Gardens

One of the most beautiful places to visit on Bainbridge Island is the Bloedel Reserve Gardens. This 150 acre public garden is filled with beautiful trees and shrubs with an emphasis on natural habitats. You can explore on your own or sign up for a two hour guided tour including transportation. One of the most popular sections is the Japanese Garden. Throughout the gardens there are beautiful views of Puget Sound with opportunities to take stunning photos.

If you want to spend more time on the island, there are several hotels and B & Bs on Bainbridge Island offering a variety of choices for overnight lodging.

The View of Seattle as the Ferry Departs from Bainbridge Island

A View of Mount Rainier

Back to Colman Dock

Did you enjoy the trip to Bainbridge Island? - Please leave your comments