The Space Needle is Seattle's most recognizeable landmark and the symbol of the city. Naturally, it is also one of the most popular attractions. On a clear day visitors can enjoy views of the surrounding city, Puget Sound and mountains over 100 miles away.

The idea for this unique, graceful architecture was literally first sketched on a placemat. The Space Needle is located at the Seattle Center, the site of the Seattle's 1962 World's Fair. The name and design of they were the centerpiece of the futuristic themed Century 21 Exposition.

Although they were intended to look like space capsules, to me the brightly colored glass door elevators resemble yellow lady bugs crawling up the sides of the 605 foot tall needle. Every year the three elevators transport approximately a million passengers to and from the revolving Space Needle Restaurant and observation deck near the top.

When it was built, it was the tallest building west of the Mississippi River and was designed to withstand earthquakes up to 9.1 magnitude and winds up to 200 miles per hour.

Nearly every day I pass by this graceful building and enjoy photographing it throughout the year in every season and in all types of weather. I hadn't taken a trip to the top for several years until I recently had the opportunity to celebrate the needle's 50th birthday and enjoy the view on a sunny day while eating lunch in the Sky City Restaurant.

I thought I'd commemorate the occasion by sharing some photos of the Space Needle and the story of how this landmark structure was built.

All photos by the author, Vicki Green, unless otherwise credited

Going up in the Space Needle

Have you been to the top of the Space Needle?

Have you been up to the restaurant or observation deck of the Space Needle?

Where is the Seattle Space Needle?

The Space Needle is located at the Seattle Center which was the location of the 1962 World's Fair. It is about a mile away from the tall buildings of the city center which makes its height appear deceiving. Many photographers who want to include the Space Needle in a photo of the city skyline do so from Queen Anne Hill. Kerry Park is a favorite vantage point which puts the structure in the foreground and makes it appear taller than all of the other buildings. The Space Needle is actually the 6th tallest building in Seattle.

A Map of Seattle Showing the Space Needle 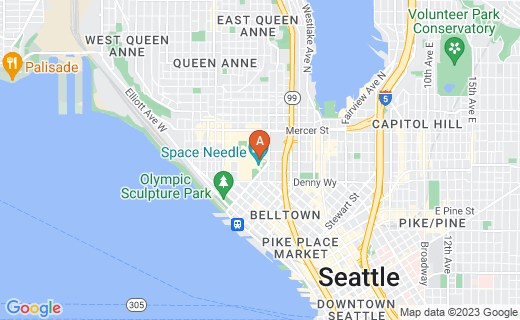 The Space Needle is located at the Seattle Center which was the site of the 1962 Seattle World's Fair.

Space Needle: Symbol of Seattle
I enjoyed this book is by local author, Robert Spector. It includes both historic photographs and full-color photos of the building.
Buy Now

The Space Needle: Symbol of Seattle - By Robert Spector

This book tells the story of the Seattle Space Needle which is more than a simple story of a building. It is also an interesting story about business leaders of the community and the civic pride of the city in the early 1960s.

Sketch of the Space Needle Submitted to the Seattle Engineering Department

The Symbol of a City Begins on a Placemat

The story of how what has become an icon was designed

One of the business leaders who planned the 1962 World's Fair was Edward Carlson. In 1959, the plan for the fair still needed a centerpiece structure when Carlson had an idea for a design after seeing the Stuttgart Tower on a trip to Germany. He used a coffeeshop placemat to sketch a design for a futuristic tower and showed it to the rest of the group who were planning the fair.

The idea was discussed and brought to architect John Graham and his team of architects. After many hours of work and discussions the final design merged Carlson's idea of a balloon-like structure tethered to the ground with Graham's concept of a flying saucer. Victor Steinbrueck is credited with adding the idea for the hourglass shape of the tower. The drawings were completed in 1960 with only a year and a half before the fair opened to build the tower.

The photo is not the original sketch on a placemat, but is the final prototype drawing that was submitted as part of the plan to the city's building department.

Construction of the Space Needle

Finding a Site for the Space Needle

The Search for a Location

Not only did the design need to be completed, but since it was a private venture and not publicly owned, the land for the building site needed to be located and purchased at the designated site of the fair. Finally, after some negotiations a parcel of land the right size was made available on the fairgrounds. The piece of land measuring 120 by 120 feet was purchased in March 1961 only 13 months before the fair was to open.

The race was on to complete construction before April 21, 1962, the opening day of the fair. The tower was built under the direction of the Howard S. Wright Construction Company, and happened with amazing speed. A hole for the foundation measuring 30 feet deep and 120 feet across was dug. The hole was filled in one day with concrete from 467 cement trucks in the largest continuous concrete pour ever attempted in the Western US. The foundation weighs as much as the tower itself with the center of gravity at only 5 feet above ground level.

When it was built, the Space Needle was the tallest building west of the Mississippi and construction far exceeded the building standards. It was built twice as strong as what was required by the building codes at the time. It was designed to withstand catastrophic earthquakes up to 9.1 magnitude and hurricane force winds up to 200 miles per hour. It also has 25 lightning rods on the top to prevent damage by lightning.

The structure was completed in December of 1961, but the final opening was down to the wire, with the last elevator installed on April 20th - the day before the opening day of the fair.

An Aerial View of the Space Needle Under Construction

The construction of the top was completed including the observation deck and a restaurant that revolves 360 degrees in an hour - a perfect speed for diners to get a view in every direction while enjoying a meal. The restaurant sits on a turntable that consists of 24 steel sections and measures 94.5 feet in diameter. The turntable was made a few miles north in Everett, Washington by Western Gear Works.

Tower is attached with 72 bolts

Each bolt is 30 feet long

This is the photo when the World's Fair opened in 1962. The original colors were: Astronaut White for the support pillars and top, Orbital Olive for the central tower core, Re-entry Red for the halo and Galaxy Gold for the sunburst and roof.

The 50th Anniversary of the Space Needle

To celebrate the 50th anniversary of the 1962 World's Fair, in April 2012 the roof was repainted in the original Galaxy Gold color. Wheedle on the Needle
Steven Cosgrove's beautifully illustrated and fun books were some of the most beloved treasures in my home. My children read them over and over again. This book, The Wheedle on the Needle was one of their favorites. Although Cosgrove's books are recommended for ages 4 through 8, my children and enjoyed them for many more years. If you are looking for wonderful children's books and haven't discovered Steven Cosgrove, you and your children will be delighted.
Buy Now

The Wheedle on the Needle - By Steven Cosgrove

My children loved all of the Steven Cosgrove books, but since we lived in the Seattle area, this book was one of their special favorites. The story is about Wheedle, a grumpy Sasquatch who is in search of a quiet place to sleep in Seattle and his quest leads him to the top of the Space Needle with interesting results. The Wheedle was also the mascot of the now defunct Seattle Sonics NBA Basketball Team, which added to the fun of the book at that time. As with all of Steven Cosgrove's books, this one is beautifully illustrated by Robin James and includes a subtle parable type of lesson. Although Cosgrove's books are recommended for ages 4 through 8, my children and enjoyed them for many more years. If you are looking for wonderful children's books and haven't discovered Steven Cosgrove, I heartily recommend.

The Seattle CityPASS contains tickets to 5 of the most popular attractions in Seattle and is valid for 9 days. The booklet includes admission to the following: