The National Zoo: See the Pandas for Free!

The Smithsonian National Zoological Park, commonly known as the National Zoo, is a great place to take the kids when they need a break from all the monuments, museums and historical sites in Washington, D.C.

Founded in 1889, the zoo is about a 20-minute ride from the National Mall on the city's subway system, the Metro. The zoo also offers parking for a fee.

One of the most-attractive aspects to the zoo is that it is free! That's a huge plus when you realize that many other zoos are now charging quite a bit of money for admission.

We toured the zoo on a recent visit to Washington, D.C.

The Highlight of the Visit!

The zoo's main attraction are its two Giant Pandas, and they are well worth the trip. The pandas, named Mei Xiang (''Beautiful Fragrance'') and Tian Tian (''More and More'') were quite interesting to see, though all they did while we were there was sit and eat.

That's not all that surprising, because the animals' main food is bamboo, which doesn't have much nutrition. The zoo says pandas in captivity also get sugar cane, rice gruel, a special high-fiber biscuit, carrots, apples, and sweet potatoes, but while we were there the only thing the two animals did was sit and break apart bamboo sticks to feed. For more information on Giant Pandas, see Giant Pandas.

The funny thing is that each panda sat with its back to us, as if they really didn't want to be bothered. We could see their faces on closed-circuit TV, so it wasn't a total loss.

Outside the area where the two pandas were sitting is a quite extensive exhibit about how endangered the animals are, and how little has been done to protect the animals and their habitat (which consists in the wild of only a small range in China).

Testing How, and If, Animals Think

One very interesting part of the zoo was the building known as the Think Tank, dedicated to researching how animals think. Or don't think, as the case may be.

Flexibility is a key in the definition of thinking, the introduction to the exhibit explains. For instance, a newborn duckling will latch onto the first large moving object it sees, whether it's the bird's mother, or a dog, or even a rolling ball. That's called imprinting and isn't considered thinking.

Beavers, however, know when to plug their dams and when to unplug them to keep the water level where they want it when ice occurs. That flexibility would indicate some thinking, the exhibit says.

Researchers are doing experiments with the zoo's orangutans to see how much they actually think, and there is a long video showing some of the experiments. Not to worry, all the research is safe. The animals seem to be enjoying getting rewarded for taking part.

The exhibit is in a neat older building topped with some very nice animal statues (see photo).

Less-Common Animals That Can Be Seen

We have gone to many zoos across the United States, South America and Europe, so whenever we visit a new one we tend to seek out the animals we haven't seen before. The Giant Pandas were the obvious target this time, but there were a few others that the National Zoo had that we either had never seen before or only just rarely seen.

For instance, this may have been the first time we caught Przewalski's Horse. The endangered animal once ranged across central Asia, specifically China and Mongolia. Once extinct in the wild, the horses have been reintroduced in a Mongolian animal sanctuary. These big, bruising horses are unique in that they have never been domesticated. Most horses in the world that are seen as wild are actually feral, having been domesticated in the past. but not Pzerwalski's (Sheh-VAL-ski's) horse. It's always been wild.

The caracal is another animal that I don't remember, though that may be because of the name. It was alternatively known as the African Lynx (but it isn't a lynx), so I may have seen the cat under that name in a different zoo. It's a handsome cat (see photo) that seemed quite content with just relaxing on a rock during our visit.

We also saw a Red Panda, which despite its name isn't closely related to Giant Pandas at all. Instead, the animal is in its own family, and appears to be closer to a raccoon that a Giant Panda. Two things it has in common with its namesake: 1) The animal is a bamboo eater, 2) The animal also wouldn't turn around so I could see its face!

The Zoo is Undergoing Renovations

A fairly large section right in the middle of the zoo is under renovation now, with the sea lion and seals exhibition closed.

The elephant exhibition is undergoing a large rehab that started in 2006. The upgrade will give the zoo's Asian elephants an environment more like the wild while enabling zoo-goers to get some good close-up views of the animals. At least that's what the zoo's website says. As it was, we could only get a glimpse of one elephant, and that was at a far distance.

Because of the work being done the bears are actually cut off from the main paths of the zoo, and to see them you have to wind your way all around the park to a lonely corner. And, unfortunately, they are only out on weekends. We were there on a Saturday, but didn't make it in time. They had already gone in by the time we got there.

Children's Books About the National Zoo 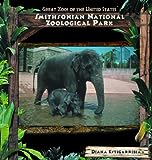 A Sampling of the Zoo's Animals Have you Toured the National Zoo?

My family and I really enjoyed our tour of the National Zoo. Have you ever visited the zoo, or do you plan to? If yes, what did you think? If no, why not?

Have you ever been to the National Zoo?

This short video was shot by my daughter, who also chose the accompanying music. The keeper told us the octopus is estimated to be about one year old.

Library of Congress, Ford's Theatre, and the Philips Collection!

We spent six days in Washington, D.C., a city that has so many great attractions that there is plenty to see for everyone in your family. Here are reviews of some of the places that we visited, and we hope to add more soon!

Thomas Edison, George Washington and the Frick Collection! - Our Other Travel Lenses

Thomas Edison's Laboratory
The Thomas Edison laboratory in New Jersey is a great family day trip. Edison was the inventor of the first practical electric bulb, the motion picture camer...

For more about who we are and what we write about see here:

I hope you enjoyed this lens as much as we enjoyed visiting the National Zoo. Please share your thoughts on the zoo, pandas, this lens or anything else that's relevant.