The 'Athens of the North' and a famous landmark.

The Scott Monument, the world's largest memorial to a writer!

This Edinburgh Monument stands like a gigantic gothic Victorian space rocket ready to lift off into the skies above the city's principle thoroughfare Princes Street.

The famous city landmark, standing just over 200 feet high (6.1 metres), built to honour a famous Scottish writer is the Scott Monument. And what is more you can climb the 287 steps to the top for unrivalled panoramic views out across the city and beyond. But beware for there is no lift.

Now included in Lonely Planet's top 1,000 'world sights' - it is described as being 'among the world's spookiest buildings', 'a spiky Gothic fantasy with more than a passing resemblance to a Thai temple'.

Whatever the prose it is certainly worth a visit!

The monument was built to commemorate Sir Walter Scott who died in 1832.

It followed popular sentiment and a widespread feeling that 'something' should be done' in his memory. An open competition was announced inviting designs for a public monument to be erected to this great Scottish writer. The winning design eventually chosen was by George Meikle Kemp, a self taught architect who was actually a joiner and draughtsman by trade.

Kemp was awarded the contract to build the monument in 1838 and the foundation stone was laid on 15 August 1840. The structure was completed in the autumn of 1844 at a cost of over sixteen thousand pounds with the bulk of the monies being raised by public subscription.

Tragically the architect was never to see his work completed and his dream fulfilled. One evening he was drowned in the Union Canal whilst walking home from the Princes Street site of the monument.

A view from the top!

The structure is built from Binnie stone quarried from shale workings near to Linlithgow, north west of Edinburgh, said to contain natural oils which aid preservation. Today, however, the leeching of the oil from the stone together with the effects of pollutants from Victorian 'Auld Reekie' (Edinburgh's nickname is 'old smokey') has left the monument looking a rather sooty black.

The monument's centrepiece is a larger than life, double life size, statue of Sir Walter Scott by Sir John Steell. In white Carrara marble it depicts him seated,resting from his writings, and holding a quill pen with his dog Maida by his side. 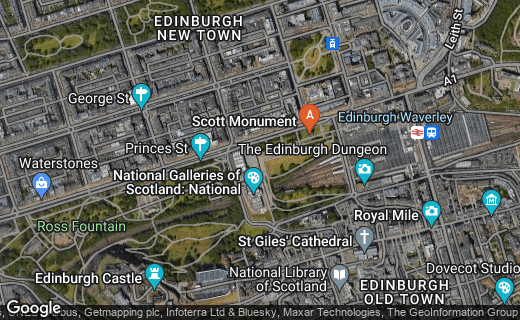 And if you climb this famous Edinburgh landmark

Information for visitors - the climb to the top

The monument is in the care of the City of Edinburgh Council.

Please see link below for Opening times and Admission charges.

It is a steep climb, 287 steps to the top, and the nearer to the top you climb the narrower the staircase becomes and with fewer passing places.

The internal stone steps rise in four stages to a series of galleries or viewing decks where you can stop to catch your breath and admire those views. And they certainly are breathtaking.

For all those making it to the top there is a certificate to keep as a souvenir of your visit.

A few other Scottish highlights...