From the 14th to the 16th centuries the monasteries of Yorkshire were amongst the most wealthy and powerful in the country, owning vast estates and tracts of land across North Yorkshire and the Yorkshire Dales.

Some of the most well known monasteries including Fountains Abbey (a UNESCO World heritage site), Rievaulx, Jervaulx and Bylands, were established by the Cistercian Monks.

However, they were not the only holy order to come to this part of England.

An order known as the Silent Monks settled in the region too.

They were the Carthusian Monks who originated in France, their name being derived from the mountainous Chartreuse district near Grenoble where their first monastic community was established. One of the strictest monastic orders, the Carthusian monks dedicated themselves to a life of solitude to serve God by personal devotion and privation and by almost total withdrawal from the world.

Leading an almost hermit existence and rarely meeting or communicating with their fellow brethren they became known as the 'Silent Monks'. Carthusian Monks did not participate in a communal life unlike their the neighbouring brother Cistercian Monks and shut themselves away discouraging visitors to their monasteries. Though they did distribute alms to those in need they did less than other orders to help the poor or care for the sick.

Where did they live?

Carthusian monks in England housed themselves in smaller and less grand monasteries than the great abbeys built by the Cistercians at Fountains Abbey and at Rievaulx. Out of the 10 Carthusian houses in England by the Carthusians Mount Grace Priory in North Yorkshire is perhaps the best example.

It was founded in 1398 and the last monastery to be built and established in Yorkshire before the Reformation which occurred some 200 years later. Although Mount Grace is built around a central church the monks lived and spent their time enclosed in individual cells, praying, meditating and working alone, with meals brought and left for them by lay brothers. There are 15 such cells at Mount Grace grouped around 3 sides of a Great Cloister which adjoins the main chapel building.

Each monk's cell was 2 storeys high and self contained with a high walled enclosed garden to the rear used for growing herbs, vegetables and flowers. The cell comprised a living room, bedroom and oratory or study on the ground floor, with an inner hallway leading to an outer open air small cloister, garden and outside latrine. A staircase from the main room led to the upstairs floor which was used as a working area often housing a weaver's loom. Much of the monk's day would be spent within this cell praying, meditating and working.

What happened to Mount Grace Priory and the Silent Monks?

The reign of Henry VIII saw a break with Rome and the Catholic church over the church's refusal to annul his marriage to Catherine of Aragon and allow him to marry Anne Boleyn. One consequence of this 'war' was the dissolution of the monasteries and in a 5 year period from 1536 to 1541 over 800 monasteries were dissolved or closed, their wealth appropriated by the crown and their monks dispersed.

Mount Grace Priory was closed in 1539 when a final 'deed of surrender' was signed. Those monks who had remained were granted pensions and the Priory site was sold into private ownership.

Henry VIII and his 'war' with Rome

In a 5 year period from 1536 to 1541 over 800 monasteries were dissolved and closed. he monks dispersed. Their wealth was appropriated by the crown, many of the buildings were partly demolished and left in ruins.... 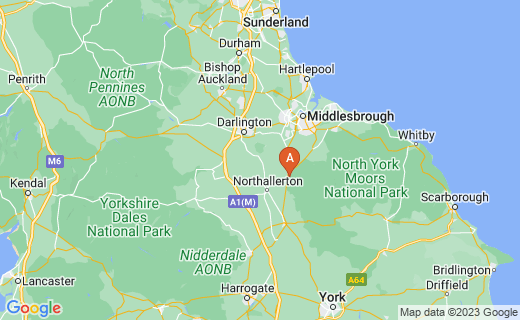 Mount Grace Priory is located a few miles away from the village of Osmotherley in North Yorkshire, adjacent to the A19 trunk road, approximately 30 miles north of York and 15 miles south of Middlesbrough.

The ruins of Mount Grace Priory still sit in a tranquil wooded setting which has changed little over the past 500 years. A 17th century manor house built using some from the stones of the Priory, later enlarged and refurbished in 1901, was built on the site of the monastery's original 15th century guest house and now houses displays and information on the Priory and the life of the monks.

Mount Grace Priory is now owned by the National Trust and in the care of English Heritage,

Please see the link below for information on opening times and admission charges.