The Accidental Paris Tourist Discovers a Secret About the Louvre

Paris had never been on my 'places to go' list. I believed the stereotypes about snooty French who didn't like Americans. Boy was I wrong.

Now don't get me wrong. They don't, like much of Europe, accommodate Americans by speaking English, but other than that I was pleased by the warm reception. I remember asking one woman for directions to the Seine. I butchered the pronunciation, something that drives the French to drink. She gently tried to help me say it the way she did, but to no avail. I could tell that I was causing her pain, but she remained polite, friendly and well, civil.

I became an accidental tourist in Paris because of a pilgrimage to the South of France. I wanted to do that (a most beautiful part of the world) and thought that it would be a once in a lifetime trip, as I wasn't much interested in that either. Since we landed in Paris, and I just knew I would never return, I thought it would be foolish to be at the airport, just that once, and not spend a few days in Paris. I arranged to go to the city at the end of the trip.

Believe the wonderful things people say about Paris, but question the bad. It wasn't even all that expensive!

I write today to tell you that, and also to share some tips about visiting the Louvre. These tips were counter intuitive to me, but I was lucky enough to stumble upon them. I hope you use them to get the most from this glorious city.

Note: To the right is a picture of me with a statue of Mary Magdalene. She is in a glass case, so there is some glare, but this was one of the wonderful surprises of the day. Try to find her when you are there.

Pleased to meet you,

While intuition might tell you to go to such a tourist and local attraction during the week, when most people are at work, this is a time to ignore that bit of common sense.

My friend, Sandy and I had a day together in France before she left for another adventure. We had no plans, but walked from Notre Dame to the Eiffel Tower. A great experience, but exhausting. We didn't think we could get into many tourist attractions, because of crowds and we were right about a couple of Cathedrals and the Eiffel Tower. (We did that anyway and I am glad we did, just the once)

We just 'knew' there was no point going to to Louvre, not on a Saturday. However, we walked by and went to see the pyramid. What do you know, there wasn't a much of a line getting in. As exhausted as we were, it was Sandy's only day to go, so in we went.

What a place. I could carry on forever about it, but this is about the lack of crowds. There were not only no lines outside, but plenty of room inside. We wondered if the city was evacuated!

The most amazing thing was the Mona Lisa room. There are other paintings there, but this small painting, dwarfed by many of the Louvre's pictures, has its own huge wall. It has a glass casing all around it and a railing about 3 to 5 feet out. But, that day the room was practically empty. So empty that we were able to stand right in front of her, well the railing, anyway. There were no people between 'she and we'. We each took a picture with her. Amazing!

I didn't go back on Sunday, thinking that Monday would be really quiet. When I went on Monday, I should have realized something was up when I saw the line, but went in anyway. What a disappointment! Tons of tourist groups with their leaders and tons of others.

The Mona Lisa room? I could barely get in, let alone stand in front of her.

The hint: Go the to Louvre on Saturday. Avoid it on the weekdays. This was counterintuitive to me, but well, I learned better.

I was fortunate enough to be able to stand in front of her, with no people or distractions in between. Vat19.com, in his video Mona Lisa: Why So Famous? gives us an in depth history to further understand this great work.

But I Promised You Tips, Not Tip

If they took out every piece of art in the entire building, including the Mona Lisa (!) The Louvre is still well worth visiting. It would take one whole day just to see the beautiful architecture, the ceilings, the floors.

Try to take your focus from the countless pieces of priceless art and really look at the building. I know I took more pictures of the museum than what the museum holds. The picture here is of a piece of ceiling. Imagine, the very ceilings are worth going to France to see!

Number 1: Was a counterintuitive revelation for me, go on a Saturday.

Number 2: I kind of knew about the wonders of the architecture but didn't go looking for it. It was breathtaking!

Number 3: Wow, my basement doesn't look like this. I mean, my house is starting to overflow with art, but I do not have a basement with more art than there is on the walls! Well, the Louvre has that. When you pass an inner window with something that looks just a little junky, stop, look, and see the amazing things in the basement. I am told that there is more in the basement than on display!

Beautiful music with a tour of some breathtaking art works.

Any Purchase Here Will Contribute to Heifer International: The Pay It Forward Entrepreneurial Charity

The Louvre in Print 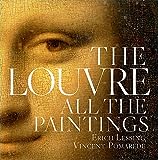 Get Serious About Mona Lisa

The Louvre in Film

A Grand Tour - One I Could Have Videoed

If I had had my Flip camera

The guys from Duran Duran were amazed that they got to get so close to the Mona Lisa the night of their concert.

I could have told them to just go on a Saturday!

I would love to hear your tips about visiting the Louvre, to share them with everyone.

I Look Forward to Hearing From You