Central London has more than its fair share of visitor attractions, historic monuments and sites worth seeing. While this is in most ways a benefit to any visitor, it can also be confusing in terms of what to see, when to visit and in what order the visits should be made - especially when time may be at a premium.

This page is therefore intended to provide an overview of some of the top visitor attractions in Central London, brief details of each and precisely where to find them in the city. This will hopefully help visitors to Central London to better identify the principal places which they would like to visit in advance and develop at least a rough schedule for their tour.

Clicking once on any of the photos on this page will cause them to open in a new window, in larger form, and allow them to be viewed in considerably greater detail.

A very warm welcome to London...

Locations of these Top Visitor Attractions in Central London 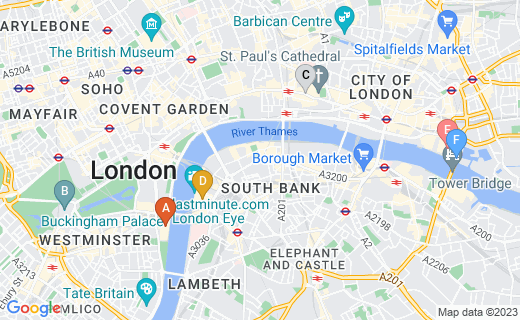 There is often a considerable amount of confusion surrounds Big Ben at the Palace of Westminster. This is because a great many people believe that Big Ben is the name given to the clock tower, when Big Ben is actually the largest bell contained within the tower. The clock tower has four faces and is the largest clock tower of this type in the world.

Big Ben is often perceived as being the symbol and even emblem of time in Great Britain. On the 31st December each year, TV and radio stations throughout the land broadcast the sound of Big Ben strike twelve midnight Greenwich Mean Time and the New Year celebrations begin in earnest. On a more solemn note, Big Ben also chimes the 11th hour, of the 11th day, of the 11th month, on Remembrance Day each year in the UK.

Getting Around in Central London

The Houses of Parliament

Obtaining access to the Houses of Parliament is not always easy. Conditions of access vary dependant not only upon the time of year and what proceedings may be under way within the chambers but also upon whether the visitor is a UK resident or overseas visitor. It is always best to check with the official website as close to the time of making a visit as possible for full details. The link may be found below:

Buckingham Palace is the Central London home of HM the Queen and is probably the residence with which she is most associated on a global scale. Although Buckingham Palace is very much the public face of the British Monarchy, it is also a working establishment where royal duties of all types are administered. The Palace is the venue for formal receptions of many types and royal banquets held for visiting Heads of State from overseas.

The daily Changing of the Guard ceremony at Buckingham Palace is very popular with visitors to Central London.

St Paul's Cathedral is one of the more striking features on the Central London skyline. The present Cathedral is actually the fourth to occupy the site over fourteen centuries, its predecessor being destroyed in the Great Fire of London of 1666.

St Paul's Cathedral as it stands now was designed by Sir Christopher Wren and was 35 years in the building, between 1675 and 1710. It has hosted countless events of monumental significance over the centuries, including in recent times the wedding of Prince Charles to Lady Diana Spencer in 1981 and the formal services to mark both the Golden Jubilee and 80th birthday of HM the Queen.

St Paul's Cathedral is open to sightseers from Monday to Saturday but is open for worship only on Sundays. It also has its own dedicated souvenir shop, many of the more popular products from which may be purchased online. The hyperlink at the top of this section will provide full details.

The London Eye is a giant ferris wheel, which perhaps at first appears as though it would be more at home in a fairground or carnival. It was built in 1999, at which time it was the largest ferris wheel in the world.

The views which The London Eye affords across London and - on a clear day - far beyond are breathtaking and the venue is extremely popular with visitors to London. There are a series of special events held on The London Eye throughout the year and booking online prior to making a visit can eliminate a lengthy waiting period, or even disappointment altogether. There are also discounts available for online bookings and full details are contained on The London Eye's home site:

Central London: A Video View from The London Eye

Dating back to the Norman Conquest of England in 1066, The Tower of London has a long, intriguing and often bloody history. It has been used over the centuries for a wide variety of purposes, from a residence for kings and queens to a maximum security prison. The Tower of London to this day remains home to theBritish Crown Jewels.

The guards at the Tower of London are officially The Yeoman Warders but they are much more commonly known as Beefeaters.

The ravens which are kept at The Tower of London are a symbol of a centuries' old, dark prophecy. It was alleged that should the last raven ever leave The Tower of London, the monarchy and the famous white tower would fall and a great disaster would befall all of England.

There can be little doubt that Tower Bridge is the most famous of all the Central London bridges which span the River Thames. The bridge dates back to the late 19th century and is so named due to its proximity to the Tower of London.

There is a story which is told of an American millionaire, Robert McCulloch, purchasing the old London Bridge in the 1960s, thinking that he was in fact purchasing Tower Bridge. The rumour was vociferously denied, however, by all parties concerned and although the story may sound good in the telling, the facts are at best, "Dubious..."

Quick Quiz: How well do you know Central London?

What is your favourite visitor attraction in Central London?

Have you ever visited Central London? What were the highlights of your trip?