Torres del Paine is a spectacular National Park in Patagonia Chile. Its landscape of jagged wind-sculpted mountains, immense ice highways and jewel-colored lakes draws trekkers and adventure lovers from around the world. Here are the highlights: 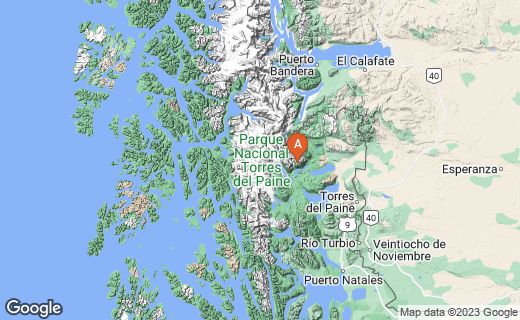 This much-photographed mountain range is an extraordinary sight. Its smooth-sided, jagged mountains rise abruptly from the Patagonian steppe. They were shaped by ice and wind acting on two distinct layers or rock - granite, and above it, a softer sedimentary rock.

Named peaks include the Towers (Las Torres) - Torre Sur, Torre Central (2800m) and Torre Norte (2600m) - and Los Cuernos (The Horns). All are set off by mirror-top lakes, sparkling glaciers and miles and miles of pampas.

Torres del Paine's best known Glacier, Grey is a 40-metre high, 28km long river of ice - in all it covers a staggering 270 km2. Get up close by hiking to the Grey Mirador; sailing to the glacier face on the Grey II boat; joining a kayaking trip, or crossing the John Gardner Pass on foot as part of the Torres del Paine Circuit Trek.

Grey Glacier, like all Torres del Paine National Park's glaciers, is a frozen tributary of the Patagonian Ice Cap, a vast sheet of ice larger than New Jersey - the second largest, in fact, outside the Polar Regions.

It straddles Argentina and Chile, but the best view of it is from the John Gardner Pass.

Lakes in Torres del Paine comes in vivid shades of green and blue, the colors intensified by rock flour from the Park's glaciers.

Lago Pehoe is probably the most visited. Probably because: it has some of the best views; it's the easiest to get to; and it has the best choice of accommodation, including a campsite (Camping Pehoé), a world-class hotel (Explora) and a large refugio (Paine Grande Mountain Lodge).

It can be reached by road and by foot and crossed by Catamaran. Crossings leave the Catamaran Dock at Pudeto three times a day: usually 9am, 12pm, 6pm. The crossing takes about 30 minutes. This is the route many hikers choose to get them to the start of the Torres del Paine W Trek.

Grey Lake's chief draw is the ice wall of Grey Glacier, from which slabs of ice crash into the water below. Join a Grey II launch from Hosteria Lago Grey to see the drama up close.

Lago Sarmiento is less visited than both Pehoé and Grey Lakes, but worth seeing for its fascinating calcium deposits.

Llama-like Guanacos, flightless Rheas and Magellanic woodpeckers are just some of the weird and wonderful animals in Torres del Paine. More familiar are Condors, Flamingoes, Buff-necked ibis and Foxes.

Getting to Torres del Paine

Getting There  The Park is found at about 50 degrees south in the Chilean province of Ultima Esperanza in the region of Magallanes (Region XII). The closest town is Puerto Natales. In summer, Sky Airline flies there from Santiago (four hours) and other cities in Chile (www.skyairline.cl), or you can fly to Punta Arenas (Lan Airlines; www.lan.com) and then get the bus to Puerto Natales (three hours). From Argentina, buses run from El Calafate (five hours) and also from Rio Turbio and Río Gallegos.

From Puerto Natales, the Torres del Paine Park Entrance is about two hours by bus (about 100km).

Summer temperatures range from a very cold 41F (5C) to a balmy 68F (20C), sometimes in the space of a few hours. High-speed winds add to the challenge. Although, these calm down in winter, but then temperatures drop to a much colder 28F (-2C) and 43F (6C). At any time of year, windproof, waterproof clothing is essential.

Most people visit during the Chilean Summer, between November and March. The park is open all year though, even if all the hotels and trails aren't. If you're looking for splendid isolation, this is the time to go.