A Venice Holiday: Four Days in the City of Water.

Only 4 Days in Venice

Venice; It was all I had imagined it would be and more. Approaching Venice on the coach from the nearby Treviso airport, I was filled with both excitement and nervous agitation. I was happy and excited to be visiting what has been described as one of the most beautiful cities in the world, but I was also aware I would only be there for four days.

This was the fact that was clouding my anticipation of the beautiful city. However, four days was enough for me to fall love with this city on the water, and has made me more determined to visit again soon.

I had researched accommodation and had booked a hotel on-line before we left the UK which resulted in success. As we alighted the coach at Piazzale Roma we easily found the water-bus or 'vaporetto' service to our destination. Our hotel -

The Great Best Western, San Marco,-was located just off St. Marks's square so it was relatively simple to work out from the display board which line of water-bus to take. We were happy to find the 'vaporetto' terminal had route map which was easy for us to understand, even in Italian. 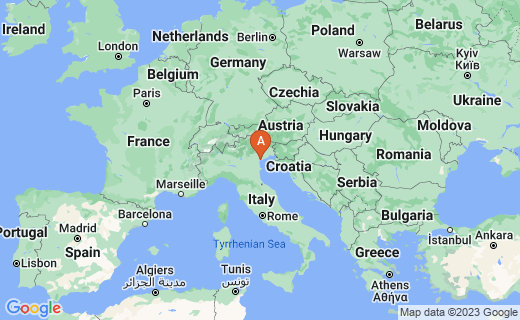 The heart of Europe

What I hadn't been prepared for was the number of people in the city, especially at the transport terminal. On average, Venice welcomes approximately 50,000 tourists a day. It was February and it was cold, yet still the weather could not deter droves of visitors wishing to enjoy a little of the beauty and style Venice has to offer. We were a little overwhelmed at first by the hustle and bustle of Venetians, going about their daily business, jumbled up in a meleé of tourists like ourselves all pushing and shoving together in the water-bus till we got used to the crowds.

The attendants on the water-buses remained superbly elegant and professional, in true Italian style, I thought.

These are the attendants who draw the water-bus to the pier and ensure the safety of the passengers embarking and alighting the buses. They were always extremely polite and helpful to all passengers. They informed some as they got on the bus of the strict ruling that wearing a ruck-sack or back-pack was not allowed. (There is a rack provided for luggage).

The water-bus rocked and swayed us along the Grand Canal to our destination. This ride in itself took us past some of the most interesting buildings and architecture to be found in Venice, buildings known as 'palaces'.

Saint Mark's Square and the Basilica were magnificent. The square itself is impressive due to its sheer size, but the queues into the Basilica were also impressive - unfortunately for the same reason. However, tourists seem to move fast in Venice and after a short wait, it was our turn to enter. The interior of the Basilica was rich and colourful, in a dimmed twilight which gave a true spiritual atmoshphere, naturally. The mosaics and the paintings were stunning and the view of the square from the top of the Basilica was worth the extra euros and the climb to the top.

The doorway to heaven? 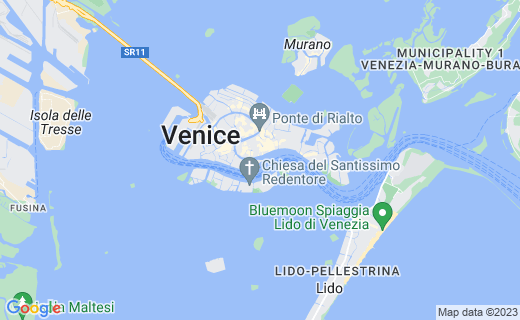 Stairway in the Doge's Palace

The Doge's Palace seemed quite unassuming, even modest, from the outside. Inside you are transported back to the medieval past and into the heart of the origins of the complex political institutions of Venice and the renowed 'Council of Ten'. The portraits of all the Doges of Venice are also displayed. You can find out some interesting anecdotes about them listening to the audio-guide provided.The courtyard at the entrance was specifically designed to impress visiting dignitaries and display the Venetian power and culture of the times, and you can also visit sumptuous chambers and extravagant stairways belying the power and style of the age.

The Bridge of Sighs! When I saw the name, I immediately imagined this must be where, traditionally, boys and girls might come to 'sigh' and make the wish to fall in love, to meet the 'person' of their dreams, their romeo, their Juliet. Nothing could be further from the truth. The 'Bridge of Sighs' was the bridge that connected the Courts of the Doge's palace to the dungeons of Venice. It was over this bridge that the prisoners were led,on their way to the dungeons and most likely to their death sentence. The sighs were heaved by the prisoners as they took their last glimpse of the outside world and at the beauty of Venice before meeting with their maker! What a contrast to what could first be imagined.

The Rialto Bridge is perhaps the most emblematic of the four bridges that crosses the Grand Canal, joining two of Venice's neighbourhoods San Marco and San Polo. There has been a bridge in this area since 1181, linking the Rialto market on the San Polo bank of the Grand Canal to the neighboring San Marco district. At the time this was a floating bridge or 'pontoon' but as the Rialto market developed, there became a need for a more permanent structure. The bridge went through various developments and finally, in 1591 the present stone bridge was constructed. This is the oldest bridge crossing the Grand Canal and was considered a feat of engineering at the time. It seems as though the The Rialto market has actually been continued along the bridge as there are two lines of shops, mostly trading in jewellery, enticing tourists to buy souvenirs of Venice from them. The atmosphere on the bridge is vibrant with fellow tourits soaking up the moment of being in the real 'hub' of Venice. The real mystery is how the construction has survived so long with literally thousands of tourists passing over it, or even just loitering on it for hours, contemplating 'gondola's, water-buses, water-taxis and other fellow tourists.

Venice is proud to boast it was the birthplace of Antonio Vivaldi and there are many opportunities for the visitor to experience a concert performing typically "The Four Seasons" or other works by Vivaldi. The church of San Vidal beside L'Accademia Bridge holds concerts every evening for a modest price and was full to bursting even in February! Book early to avoid disappointment!

The church itself is worthy of visiting and is a fitting venue for such a masterpiece. The acoustics are superb and the evening was a perfect ending to what had been a wonderful visit.

Let me know if you ever visited the city of Venice. What were your most lasting impressions?

What did you do there? Would you ever plan to visit again? If so, what would you do better?

If you would like to Visit the 'City of Water' what would be on your 'must-do' list and why,