Mountain biking down the World’s Most Dangerous Road, Bolivia

Planning a Trip to Visit the Death Road

As soon as I had decided that I was going to travel to South America, there were several activities that I knew I had to do. One was to visit the world’s highest waterfall, Angel Falls; one was to take a tour through the Salar de Uyuni salt flats in Bolivia; and another was to cycle down the world’s most dangerous road.

Now, up to the point of donning the protective cycling gear and listening to the instructions of the guide whilst straddling my bike at the starting point of the route - some 4700m above sea level! – I had never considered myself anything close to an ‘adrenaline junkie’ - much less having any previous desires to cycle down what is ominously known as the death road! Several hours later, gutted to learn that we had reached the bottom, I was thinking up all sorts of possible activities I could do next to hit the adrenaline highs that I’d just experienced on the death road for the last few hours!

Everyone’s familiar with these images of big trucks trying to pass each other on a road / ledge that's so narrow that it appears you’d need to creep around corners with your back to the wall in a manner reminiscent of the cartoon villains climbing out of skyscraper windows and gingerly side-stepping along the ledge 40-storeys up.

You'll have seen these Death Road images; one of the trucks has a wheel or two precariously over the edge whereby any shift in weight would send it hurtling over the side. There was a Death Road Top Gear special TV episode and there's been numerous You Tube virals and TV clip shows, adverts etc. We’ve all seen it at some point. Few ever think about going to the Death Road and fewer think about cycling down the Death Road – or so I thought.

Where is the Death Road 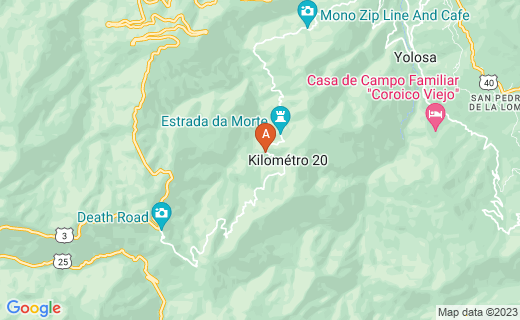 The Death Road, formerly called the North Yungas Road, was officially closed to traffic in 2007 upon completion of a new, much improved highway nearby. The North Yungas Road was originally a popular route for transporting goods, notably the coca leaf. At one point, as you may be aware, extract from the coca leaf was used in the production of Coca-Cola. By 2007 there were so many vehicles using the North Yungas Road that some reports suggest that the 'Death Road' death toll was around three hundred people each year.

Cycling down the World's Most Dangerous Road

There are lots of tour operators in La Paz offering to take you mountain biking down the World's Most Dangerous Road, or 'Death Road'. As with everything there is a competitive market and so some companies will try to outdo each other by offering cheaper prices.

For cheaper prices read cheaper mountain bikes, cheaper safety equipment and potentially shoddy guides. I did some research into death road tour operators before I went and I found that Gravity Assisted Mountain Biking gravitybolivia.com had the most positive feedback. I went with Gravity and they were awesome. Do some Death Road research of your own and go with whoever you feel most comfortable with.

At the Top of The North Yungas Road: The World's Most Dangerous Road

After an early start you meet up with the group for a coffee and a spot of breakfast at a coffee shop in La Paz. From here, with the mountain bikes stacked onto the roof, you jump onto a bus and drive for about an hour up to the starting point of your mountain biking trip. The starting point is at 4700m above sea level and as such you’re likely to be cold for a while until you start to descend later on.

You get an opportunity to test out your mountain bike and get comfortable with it. These are $2000 down-hill bikes and you feel comfortable with the right away. The guides will help you get kitted out and then give you an overview on how to use the brakes, how to position your body and what NOT to do. As per the local custom we all consecrate the ground and our lips with a little pure alcohol and then we’re off.

At first we travel down about 12km of sealed highway. It’s all downhill and gives you a good opportunity to test out the brakes and try out some positions to make yourself most aerodynamic and pick up some speed - you’ll be going too fast to pedal (even with 27 gears) so this is necessary.

It’s clearly not a race but the great thing is that you can go really fast if you want to. There are 2 guides – one at the front and one at the back – as well as a guy driving the bus who follows up the rear. The guy at the front will set the pace for the adrenaline junkies who want to go fast. Unless you’re a pro, he’ll always go faster than you so you can never say you could have gone quicker.

The guide will stop every so often so the group can gather and take in the scenery together. I liked these regular stops. I found that I got more and more confident each time we stopped and found myself able to go faster and faster with each restart. However, don’t get too confident on the asphalt – this part is easy. After going through a checkpoint we go down a short gravel section as a taster for setting off down the world’s most dangerous road proper. On the gravel you’re going to encounter loose rocks and stones and you have to quickly learn when to hit the brakes and how to turn correctly. If you turn and hit the brake as you go over one of these rocks then your wheel is just going to slide right out from under you.

When you get to the start point of the actual 'Death Road' you get to really take it all in as you stand there seeing the death road unfold down through the valley below. You’ll still be very high up at this point and so you’ll see clouds floating below you in the valley. The drill as is as before – one of the guys will go in front - and there’ll be regular stops along the dangerous highway to re-group.

It’s a good thing you get to stop as without this you’d miss all the breath-taking scenery of the Bolivia mountains. I took my eye off the road once to get a look at the valley below and found myself veering toward the edge. I quickly fixed my eyes firmly on the road ahead and waited for the next stop before looking around again!

Waterfalls on the Death Road

Re-grouping for a Rest

Tearing down the World's Most Dangerous Road

After an hour or so you’ll have descended a good distance down the Death Road and you’ll start to feel the change in temperature. When the bus catches up to the group you have an opportunity to de-layer and dump your clothes in the bus. By the time you get to the bottom of the North Yungas Road you’ll be down to just your shorts and vest! By now it’ll be so hot and your confidence will be so high that you’ll happily risk a scraped knee or a grazed elbow to get rid of the heavy protective jacket and trousers.

Thankfully no one got injured in our group (a group of 12) but it does happen. There’s a section about two thirds of the way down where there are some tight bends and it’s where 80% of the accidents occur. Apparently most of these death road accidents are caused by over-confident males. Really, that can’t be right can it, I hear you say!

At various stages along the route you will see crosses marking the spot where someone went over the edge and died.

Would you cycle down the Most Dangerous Road in the World?

…was all I could think of when we reached the bottom and the guide told us to pile our gear on the floor and park our bikes next to the wall. I wasn’t ready to come down from my adrenaline high just yet. Here I was, a closet adrenaline junkie after all these years. Who’d have thought it. This is truly a once in a lifetime experience. There’s a dangerous element to it of course, but it’s not as dangerous as one would expect. Don’t over-think it, just do it.

Check out some of my other travel-related articles