Howard lived and worked for 20 years in remote parts of Indonesia and the Philippines.

The Moluccan Scrubfowl is endemic to the Moluccan islands, east of the Wallace Line in Indonesia. As a megapode, it is related to about twenty other chicken-like birds with long toes and smallish heads. Its Latin name, Eulipoa wallacei, is in honor of Alfred Russel Wallace. Other common names for it are Wallace’s Scrubfowl and Painted Megapode.

Identification and distinctives of the Moluccan Scrubfowl

Megapodes do not warm their nests with body heat, but rather regulate environmental heat sources to incubate the eggs. This characteristic gives them the common name of incubator birds. Most megapodes may also be called mound-builders because, unlike other birds, they generally build mounds of decomposing organic matter to incubate their eggs.

The nomenclature mound-builder, however, specifically does not fit the Moluccan Scrubfowl because it incubates its eggs in solar-heated beach sand instead of building mounds. This is the only species of incubator bird that lays its eggs only at night. 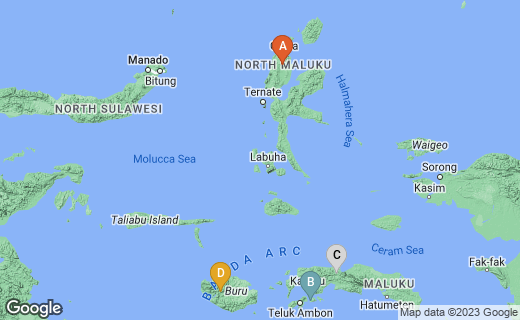 The Moluccan Scrubfowl is about 12 inches in length. It has a mostly drab brownish to olive coloring. There is a reddish tint to the upper body with pronounced streaks of gray. The underbody is gray with white under the tail. Adults have a bluish bill and olive legs, both of which are black in juveniles.

The Megapodes: MegaPodiidae (Bird Families of the World, 3)
A must-have about megapodes, also known as incubator birds or mound-builders. Includes scrubfowl, maleefowl and brush-turkeys.
Buy Now

Habits and habitat of the Moluccan Scrubfowl

Adult birds are inconspicuous and prefer to forage in dense scrub forests and highland hills above 2,000 ft. When nesting, they will frequent mangrove areas and tidal flats. They feed on insects, invertebrates, lizards and fruit.

Adult birds form monogamous pair bonds and forage as a pair. They occasionally call in duet to keep track of each other and to signal territorial domain.

Today, two-thirds of the birds nest at the seashore in the Galela subdistrict and around Lake Lina inland from Kao, both on Halmahera island. Most of the rest are located on Haruku and Seram. The bird is now extinct on Ambon, Ternate, Bacan, Kasiruta and Misool. A few nests remain on Buru and perhaps on Obi.

Nesting sites are communal, hundreds of birds nesting on the same stretch of beach. The resulting concentration of eggs decreases the impact from predators, who take no more than they can eat, but increases the threat from systematic harvesting by humans.

The eggs are laid at night in pits dug in solar-heated beach sand. On Galela beach, the sand is black from volcanic action, and therefore heats readily. The birds know precisely how deep to dig the nest pit so that there is just enough insulating sand covering the eggs to keep them at a constant 33° C (91° F). A clutch of eight to twelve eggs is laid large end up so that the feet are positioned for clawing upward and out of the nest.

The eggs are about three times as large as a chicken egg. The yolk is relatively larger, four times that of a chicken egg, or about 50–70% of the egg by weight.

Megapodes do not have an egg tooth to break the shell. Instead, the chicks use the claws on their big feet to scratch through the shell. They hatch feet-up and claw their way through the upper part of the nest.

When they emerge, the chicks have reached 20% of adult body weight, are feathered, fully-developed and able to fend for themselves. Hatchling chicks can run, forage, hunt and even fly, although they are primarily a terrestrial bird. Adult birds never assist them.

The viability of the Moluccan Scrubfowl has been classified as vulnerable to endangerment. It is theoretically “protected” by national law. Its numbers are still decreasing due to loss of habitat and poaching.

The introduction of a very large-scale banana plantation inland from the nesting grounds at Galela threatens its foraging area.

Natural enemies are birds of prey, monitor lizards and two species of pythons. Feral pigs and introduced dogs and cats pose a threat to both birds and eggs.

The greatest threat comes from the local population. In Galela, the beach is divided into claims that are harvested by individual subsistence farmers. Since the eggs are considered not only a delicacy, but a souvenir to be carried back to family and friends, they are sold in the market, each individually-wrapped in its own woven palm leaf cocoon.