Something Fishy In the States of California, Alaska, and Florida - The Top 5 Wasteful and Dirty American Fisheries

Consumer Alerts In the Fishing Industry

The commercial fishing industry is the most deadly to workers in the world, accounting for most deaths per 100,000 people employed, higher than the rate of deaths in any other industry. At the same time, parts of the industry are the sloppiest and most wasteful among all industries.

The US National Office of Science and Technology within the Marine Fisheries Service of the National Oceanic and Atmospheric Association (NOAA) monitors fisheries for best and worst practices and waste. One monitoring post is located at

Surely, it will be busy for years with the recent Galveston oil spill in March 2014 that will hurt marine wildlife for a decade or more. In addition, such observers monitor fisheries to examine bycatch, which includes the inadvertent catching of endangered wildlife and over-catching, which is catching numbers of allowable species above the permitted catch quotas.

Some non-fish wildlife ends up in canned fish and tons of dead fish are thrown back into the oceans and Gulf of Mexico.

Large Amounts of Waste are Unnecessary

If food waste can be cut in restaurants by calculating the actual amounts of food needed on a daily basis, including a small margin for waste, then cuting waste in another industry sector is plausible. The top five wasters of commerical marine products in the US are largely located in the Pacific region and the Gulf of Mexico.

The Earth's oceans, seas, and gulfs are large, water covering more surface area of the planet than is covered by land masses, but a limit to the amount of trash they can accumulate is becoming more evident with the passage of time. Increasing numbers of oil spills are affecting waterways like the Gulf of Mexico as well.

In addition to the trash island of plastic shopping bags and other debris in the Pacific Gyre, the other gyres of our largest waterways have accumulated islands of trash, although they are thus far smaller than the monstrosity in the Pacific Ocean. These islands are not becoming smaller.

An interesting documentary about US Navy vessels and the food service offered on them recently described the way in which galley crew of the large ships dispose of aluminum soda cans by grinding them up and dumping them in the oceans. The cans dissolve, but how do they affect the chemical composition of the waters? Perhaps the tonnage of aluminum is insignificant in proportion to the vast amount of water.

Do cruise ships dispose of human waste and other debris and garbage in our oceans and seas? Toxic industrial wastes also flow into the oceans. These are other element to consider.

According to NOAA and its FishWatch,

Commercial shrimp fisheries can reduce the numbers of non-shrimp wildlife. Specifically at risk are sea turtles and finfish like red snapper.

To reduce this bycatch, shrimp trawlers must have bycatch reduction devices (BRDs) and Turtle Exclusion Devises (TEDs) . These BRDs and TEDs keep in the shrimp and let out the fish and turtles. As scientists monitor shrimp and non-shrimp catches and bycatches in the Gulf of Mexico, they can advise authorities to close off portions of the waters to trawling for a limited amount of time.

As found by NOAA and reported by several news outlets and Oceana.org, the five worst fisheries in America are:

This is the worst offender named by NOAA and the media. The company wastes at least 66% of their yearly catch (well over half). In the course of just one year, at least 400,000 sharks were caught in the hooks of the long fishing lines that stretch for dozens of miles.

2.) California Set Gillnet Fishery, off the Coast of California.

This company throws away 65% of its overall catch annually, including 30,000 sharks and rays, mackerel and other food fishes in just three years. The target fish is halibut.

3.) Southeastern Shrimp Otter Trawl Fishery, Gulf of Mexico and Southeastern Seaboard to North Carolina; 6,000+ boats. 64% of their catch is thrown away.

This fishery trawls for Penaeid shrimp of the white, pink, and brown varieties and any other marine life in their nets is considered unallowable bycatch. Since 1992, the trawlers have caught at least a dolphin, a manatee, and hundreds of sea turtles. According to NOAA, observers can cover only about 1% of all fishing done by this company.

America still receives much of its shrimp from other countries, making the reported waste of this US company even more unacceptable.

4.) California Drift Gillnet Fishery; Coastal waters of Southern California. At least 63% of this company's catch is discarded every year. Besides food fishes, the company caught over 500 dolphins, seals, sea lions, and whales in just five years. The target fish is swordfish and one species of food shark.

Over 41 million pounds of usable fish are thrown away every year, at least 35% of the overall catch. Bycatch includes cod, crabs, salmon, sharks, skates, and several others. Most of this is good food fish that is thrown away. However, the target fish is flatfish. Anything else is discarded, usually already dead.

At least 35% of their catch is tossed out for a total of 50 million pounds of food fish wasted every year. Groundfish and whiting are the target fish. 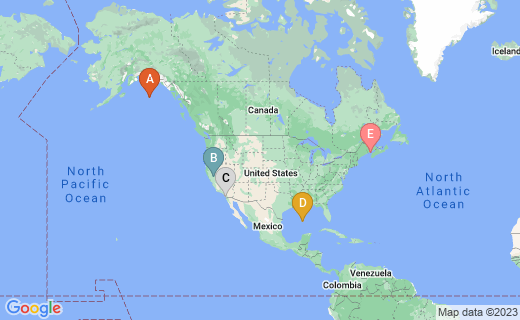 B
Off the Coast of California:
Sacramento, CA, USA

Two fisheries under observation are located here. The range of fishing extends from Texas around Florida to North Carolina.