Michael Jackson's This Is It Blu-ray Movie Review

We just finished watching Michael Jackson's This Is It on blu-ray and we loved it! MJ, as they call him, really was a musical genius. It is incredibly hard to believe that after all that practice and hard work, this concert was never performed live for the public and never will be.

Have YOU seen Michael Jackson's This Is It? Are you curious? Are you searching for more information? If you are, I hope this page will help you. It contains some expert reviews and some non-expert reviews as well as the trailer for the film. And oh yes, check out all the amazing movie posters and a version of the Mission Hill red lion shirt that MJ wore in This Is It.

Click here to order your copy of Michael Jackson: This Is It on blu-ray from Amazon.

a celebration of life rather

than a remembrance after death,

is a must-own Blu-ray for both

Michael Jackson's This Is It Official Movie Trailer - If you love Michael, make sure to turn your volume on and up!

Amazon Customer Reviews of Michael Jackson's This Is It

This Is It has 261 five-star reviews on Amazon. Here are six short quotes from them. It really doesn't take many words to describe the film.

"I'm Glad They Did This Film." - Tommy Morais

"THIS IS IT is OUTSTANDING." - Barbara Rose

"Amazing that this film was assembled in less than four months." - Joseph Menta

"Stole My Breath Away." - Kimberly Algaier

"A moving documentary on a legendary musician." - K. Windrim

"THIS IS IT! What a fantastic curtain call!" - EastCoast eeniemeenie

This Is It Blu-ray Review by Enid Burns

“It's clear from the moment Michael Jackson walks into the frame of Michael Jackson's This is It, the man moved - and lived - for the stage. The second the music starts, MJ's trademark dance moves and theatrics just start to happen, almost without thought. The documentary chronicles rehearsals and planning for the upcoming concert tour, "This is It." While the film highlight MJ's enthusiasm for the stage, it gives the cast of dancers, singers, and musicians - many of whom were unknowns from around the world - an opportunity to show their work that never saw the stage with the music legend.

Michael Jackson's This is It made it to theaters (instead of travelling the world) and became one of the highest-grossing concert documentaries in its limited run in theaters. And its stunning picture and sound make it better suited to Blu-ray than to any other format.” ~~ Enid Burns

This Is It Blu-ray Review by Highdefdiscnews

"The Hi-Def footage looks amazing (there is some standard definition footage) here with sharp detail, bright vibrant colors, accurate flesh tones and a very solid black level. This Is It earns a perfect "5 Star Rating" for overall video quality.

Overall the presentation here in terms of sound is very impressive and sure to leave fans pleased, earning it a "4.5 Star Rating" for audio quality. Jackson was not singing at his full vocal capacity, a definite shame, but these rehearsals do hold a great amount of emotional significance regardless and most importantly, they sound excellent." ~~ highdefdiscnews

Michael Jackson's This Is It - Discover The Man You Never Knew

Michael Jackson's This Is It On Blu-ray

An amazing documentary film, a true tribute to the King of Pop. This film is filled with music and performances but is also filled with moving moments. Michael Jackson fans will love it as a tribute to his singing and dancing; people who are less familiar with him, will get a fine introduction. A totally unusual one-of-a-kind film considered, by many, a masterpiece.

Michael Jackson: This Is It [Blu-ray]
Buy Now

"Sony has rolled out the red carpet for This Is It; the Blu-ray presentation features a true-to-the-many-sources 1080p transfer, a pristine lossless soundtrack, and solid array of extra materials. Highly recommended." ~~ Blu-ray.com

Michael Jackson's This Is It T-Shirt - Available in gray and in black from Amazon.

Click here to order Michael Jackson's This Is It Movie t-shirt from Amazon in black or gray.

Journey on a rare, behind-the-scenes peek as Michael Jackson developed, created and rehearsed for these sold-out concerts.

Naturally, Michael Jackson videos that have not been issued on DVD are in big demand now that the superstar is no longer alive. On my page dedicated to rare Michael Jackson, you will find some rare and interesting recordigns that are only available on VHS videotape. You may or may not know that Michael appeared on The Carol Burnett Show or that he was on Rockin' With The Chipmunks. Read more about these rare recordings by clicking right here.

The 2010 Grammy's presented Michael Jackson with a Lifetime Achievement Award.

Michael Jackson's Earth Song as sung on the 2010 Grammy Awards. - You can listen to and download Earth Song for your MP3 player or you can order the whole CD fr

On January 31st, 2010, the Grammy Awards presented Michael Jackson posthumously with a Lifetime Achievement Award which was accepted on his behalf by two of his three children. Preceding the presentation of the award, Carrie Underwood, Celine Dion, Usher, Smokey Robinson and Jennifer Hudson performed Michael's Earth Song. Read what else I had to say about the Grammy Awards ceremony by visiting my Music and Movie Treasures By Brenda Blog by clicking right here. 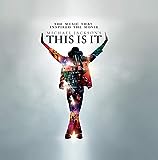 Michael Jackson's This Is It (Extended Version)
Buy Now

Have you seen Michael Jackson's This Is It?

It's a tragedy that the world did not and never will experience Michael Jackson live in this concert.

I grew up listening to Michael Jackson and I really did enjoy most of his music. I can actually remember staying home the night they played the Thriller music video on television for the first time and that must surely be one of his greatest songs. Well, I love Billie Jean, too. MJ had so many fantastic songs!

The night my husband & I enjoyed watching This Is It from the comfort of our home theatre, we were reminded that MJ really was an extremely talented artist. When he passed away in 2009, the world lost a true musical genius. It is sad to think that all that work and preparation was done for a concert that was never and will never be shared with a live audience, as was intended.

At least we will always Michael Jackson's music to remember him by. What about you? Did you enjoy his music?