Christ out of Christmas - How to Get Him Back!

Why do so many people insist on taking Christ out of Christmas? I see this holiday season has begun with the squabbling over the word “Christmas.” I don’t get it. If people don’t want to celebrate the season, no one is forcing them to do so. Many non-Christians celebrate Christmas as a time to be with family and friends and to exchange gifts with each other. Of course, Christians honor Christmas because it celebrates the birth of Christ. Changing the name of the holiday will not negate its history. I’m aware that Christmas combines elements of Christianity and pagan rituals. I don’t have a problem with that. What I have a problem with is the fact that people want to change the term – to totally remove the name “Christ.” If you'd like to add Jesus back to your holiday, I have some Christmas ideas for you, and especially for to use with your children.

Like it or not, world religions today are everywhere, provided you look closely. Some are Judeo-Christian symbols and icons like angels, demons, and crosses. Some of the ones we use the most, however, come from ancient religions and mythologies. They’re impossible to escape – especially the subtle allusions. Okay, just for a moment, let’s say we remove all allusions to deities and religions from our holidays, celebrations, months, and days of the week. What would be left? Did you know that half of our months are named for gods or goddesses?

What about the days of the week? Tuesday is the day of Tiw, the Germanic god of war.Wednesday is Woden’s day, after the most powerful Norse god.Thor’s day became our Thursday, after the Norse god of thunder and lightning.Friday is the day that belonged to Frigg, a goddess known for her beauty and kind spirit.Saturday gets its name from Saturn, the Roman god responsible for weather.

Now, about those holidays:Valentine’s Day was named for a Catholic saint, Valentine. Even before this, the middle of February began the ancient Roman celebration of Lupercalia, a pagan fertility festival that honored Faunus, the god of agriculture.St. Patrick’s Day celebrates the life of Patrick, who was born in Britain but traveled to Ireland as a missionary in the fifth century.Our Easter is a combination of the Jewish Passover and the resurrection of Christ.May Day is based on pagan fertility rites, with the maypole being a phallic symbol.

Most people know that Halloween is actually All Hallows Eve – the night before All Saints Day, also called “All Hallows Day.” But the history goes back further. The ancient Celts called this night Samhain and believed that October 31st was the one night of the year when the world of the living and the world of the dead merged. When the Romans arrived in the first century, AD, they combined two of their autumn festivals with Samhain. In the seventh century, Pop Boniface IV named November 1st All Saints Day, and the pagan and Christian celebrations combined.

Most people cite the feast held by the pilgrims and the Wampanoag s in 1621 as the first Thanksgiving, but there was an earlier, although not as famous, origin of the celebration. In 1619, in Virginia, Captain John Woodlief and his group of British colonists commemorated their safe arrival to America by kneeling in prayer to God and exclaiming their “thanksgiving.” This brings us through the calendar year and back to Christmas.

Whether you like it or not, religion plays a huge part of our day-to-day lives – and I haven’t even mentioned the names of the planets. So if we totally do away with any religious references, we’ll have to change a lot of common names and do away with several of our most popular holidays. After all, what if someone is offended by the allusions to Roman gods, or to the Norse form of religion?

Want some Christmas ideas for getting Jesus back into the season? There lots of ways to do this without changing all your family traditions. My family and I aren’t religious, for the most part. When I use the term “religious,” I mean we don’t adhere much to organized religion. We believe in God, in Christ, in prayer, and in reading the Bible. We all try to be good people and to help our fellow creatures, including humans and animals. One daughter and her family attend church every Sunday, but the rest of us go only occasionally. We try to pass the practices of compassion and giving on to the grandchildren.

We celebrate Christmas the way most Americans do. We have a big tree, along with other indoor and outdoor decorations. We watch Christmas movies together, attend holiday events, and enjoy shopping adventures. On Christmas Eve, everyone gathers at my house for food and presents. I see nothing wrong with any of this. We do, however, incorporate some religious Christmas messages in our celebration, too. For some Christmas ideas of this type, keep reading.

How can you send kids religious Christmas messages without foregoing all the fun and excitement of the holiday? I think this is best done with addition – not subtraction. In other words, don’t take away your kids’ favorite holiday activities. Instead, add a few that address the religious aspect. That way, the kids won’t feel that their holiday experience has been slighted in any way. Hopefully, they’ll feel that it’s been enriched.

We also use religious Christmas messages from the Bible. Each year on Christmas Eve, an adult reads the Nativity story from the Book of Luke. The kids sit spellbound as they listen. After the story has been shared, we usually ask a few questions to assess the children’s level of understanding. If they’re confused and have any questions, we respond to them.

Other messages we try to share with the kids include caring, compassion, sharing, and giving. Of course, these aren’t necessarily religious in nature. In fact, there are many atheists and agnostics who share generously of their time, money, and resources to help those in need. We’ve done things like adopt needy families for Christmas, visit and take candy to nursing home patients on Christmas Eve, and donate money, food, and goods to help poor families have a decent holiday. We always get the kids involved with these activities as much as possible. Compassion and empathy are learned, and adults have to set a good example for kids to follow.

One way to help your family remember the real meaning of the season is to attend religious Christmas plays. We try to take the grandkids to at least one performance every year, and they love them! My youngest grandson actually played the part of baby Jesus once. That was when my grandkid was still an infant.

Just about every Christian church I know of performs religious Christmas plays each year. Admission is almost always free, and most churches would be elated to have extra visitors. Of course, some of the plays are better than others, as far as performances and details are concerned. A small county church might use simple costumes and a few cardboard props, while larger churches might display more elaborate performances. A couple of churches around here, for example, use period costumes and live animals, even including camels! Live performances might be more effective at getting out religious Christmas messages than narrated stories do, especially for kids. They’re more realistic, and they’re sometimes easier to follow. A play can really bring a story to life!

Religious Christmas cards can also serve as friendly reminders. Most of these are beautiful, and many include inspiring or touching messages. Even if you don’t normally send seasonal cards to your family members, it might be a good idea to start doing so. You never know what might prove to be thought provoking.

We don’t usually send Christmas cards, but I like to buy them, anyway. When I can find a box of assorted cards, I usually bring them home with me. I like to set the cards around on tables and shelves as part of my holiday décor. They’re colorful, inexpensive, and disposable. I’ve also noticed that the grandkids often enjoy reading the script in the cards and looking at the scenes displayed.

Many religious Christmas cards portray the Nativity – or at least part of it. They might depict Mary, Joseph, and baby Jesus in the stable; Joseph leading Mary on a donkey; or the Wise Men in the desert. They might also picture the Star of Bethlehem or angels. Others might be broader in scope and address more universal themes like joy, love, peace, generosity, hope, and kindness. Honestly, I’ve never seen a religious card that had a negative message. 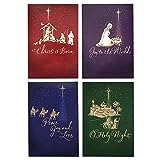 A great way to get everyone into the holiday spirit is through song. Of course, kids love the old non-religious songs like “Rudolph, the Red Nosed Reindeer” and “Jingle Bells,” but there are also some wonderful religious Christmas carols. My all time favorite is “O, Holy Night.” I also love “O Come, O Come, Emmanuel.” Carols such as these might be a little “deep” for younger children, however. A couple of good religious Christmas carols for kids are “The Little Drummer Boy” and “Away in a Manger.” Myfavorite of this type is "Do You Hear What I Hear." Listen to it below! The simple narratives shared in these songs are easy for children to grasp. Make some carols part of your regular holiday celebration. Buy some CDs and play them throughout the holidays. I like to turn my TV to one of the all music channels that plays seasonal favorites. The songs here are accompanied by nice photographs, so you get a video as well as an audio experience.

Religion in America is a powerful force. The United States has the largest number of religious groups of any nation on earth. As of 2002, according to polling conducted by the Pew Research Council, 82% identify themselves as Christians. 1% identified themselves as Jewish, less than 1% said they were Muslim, 1% identified themselves as atheists, and 2% said they were agnostics. The findings from a scientific study done by NSRI of 113,000 Americans, and one done by ARIS of 50,000 Americans, reported results in keeping with the Pew study. Christians enjoy a huge majority in the US. If you don’t believe in Christ and don’t want to celebrate Christmas, fine. But don’t try to ruin it for the rest of us who love the season!