Anne Bronte and her novel "Agnes Grey" : a review

The famous Bronte family of 19th century England, also produced another accomplished writer in the youngest of the Bronte children, and that was Anne Bronte. She, along with her two older sisters, Emily and Charlotte, was an English poet and novelist. She was the author of two novels, Agnes Grey in 1847, and The Tenant of Wildfell Hall in 1848. Both novels were published under her pseudonym Acton Bell, and Agnes Grey was published along with her sister's novels, Wuthering Heights, by Emily and Jane Eyre, by Charlotte.

The Bronte family lived at Haworth in Yorkshire, England as their father became the. rector of Haworth in 1820, and he remained there for the rest of his life. Anne's mother died in 1821, along with two older sisters, Elizabeth and Mariah, who died a few years after the mother. Anne also had an older brother. All the Bronte children were sickly during their lives and all succumbed to tuberculosis in the end.

Anne was educated at home at the family's Haworth home in the cold and isolated moors and at Roe Head School. With her sister Emily, as children, she invented the imaginary kingdom of Gondal of which she wrote many poems. To entertain themselves in the bleak, and lonely parsonage of their father, they lived in this imaginary kingdom and became writers to pass the time living on the lonely moors of England in Yorkshire.

When Anne was nineteen, she took a brief position as a governess in 1839. When that position ended within a year, she then took another governess position for four years from 1841-45. She returned home to Haworth in 1845.

It was her experiences as a governess with these two families that became the subject of her novel, Agnes Grey, a semi-autobiographical novel. The novel depicts the travails of a minster's daughter in her service as a governess first to the unruly Bloomfield children and then to the callous Murray family.

Through the novel, Anne looks at the lonely and isolated position of a governess that Agnes experiences working for wealthy families in the early Victorian times. She also deals with the issues of abuse and oppression a governess experiences at the mercy of the families she works for.

During this time period, a governess was in a limbo class state: not a servant but not on equal terms with the family who has hired her either, since she must work for a living. However, a governess position was all that was respectable and available to poor but educated women of that time period. Anne looked at a governess as in a precarious position because one was at mercy of the the wealthy family that employed her.

In 1846, Anne joined her two sisters, Emily and Charlotte, and contributed twenty-one of her written poems to the publication, Poems, by Currer, Ellis and Acton Bell. It was published by all three sisters.

Next, she wrote her two novels and in 1849 she died from tuberculosis and was buried in Scarborough, England. She is the only sibling not buried at Haworth with the rest of the family.

Anne's novel, Agnes Grey came about as the result of her reflections on life as a governess found in her diary in July 1845. She set about to have the main character, Agnes, to be a semi-autobiographical look at the life of a governess.

Through this central character, Anne was able to deal with the issues of oppression and abuse to women and governesses in early Victorian times. The isolation and loneliness of the life of a governess, never being really part of the family she works for, and the precariousness of a governess' position became the central themes of the novel. Another minor theme she deals with is the fair treatment of animals.

Agnes Grey is the daughter of a minister, whose family comes to financial ruin when they lose all their money to lost investments. Agnes wants to care for herself and seeks employment as a governess as this was the only suitable and respectable employment for poor but educated women in early Victorian England.

She becomes a governess to children of the wealthy. She works for the Bloomfield's and the Murray's who clearly represent the two families Anne worked for as governesses. Agnes learns the troubles that face a young woman who must rein in spoiled, unruly children for a living and about the ability of wealth and status to destroy social values.

When Agnes' father dies, she resigns her governess position to open a small school with her mother and finds happiness with a man who loves her and sees her for herself, not as a governess. She and the husband, also a minister, have three children, two girls and a boy, and Agnes lives happily ever after for Victorian times.

Anne's style of writing is both witty, subtle and full of ironies and the novel comes off as very similar to the qualities of a Jane Austen novel. There are great scenes of Agnes verbally sparring with the spoiled children who are selfish and self-absorbed, and with the parents who are apathetic about their children's education and behavior. Anne provides minute observations and fine authorial irony and uses the delicate power of understatement, as Agnes tries to help to turn around the behavior of her charges, but with little success.

One of the most memorable scenes from the novel for me was when Agnes kills a group of birds to save them from being tortured by one of her pupils. This was taken from an actual incident when Anne was governess for the Ingham family. It is heartbreaking to read as Agnes stones the birds to death so that the family's bratty little boy cannot torture them to death. Then, Agnes has to deal with the parents who see nothing wrong with what the young boy was attempting to do. This goes with the theme of fairness to animals and having empathy and feelings for those smaller, weaker, and more vulnerable.

The novel has a somber tone to it and Agnes displays a strong Puritan personality reflected in her name. Agnes is Greek for chaste and Grey is associated with Quakers and quietists to express disassociation from gaudy worldliness.

The fiction part of the novel is the love story that ensues for Agnes during her second governess position, the marriage and the happy ending. Agnes is rescued, not by a dashing Byronic hero as in Jane Eyre, or by a moody, dark, passionate love of a Heathcliff as in Wuthering Heights, but by a man who is good, decent and hard-working as the minister of a small Protestant parish, in keeping with the Puritan personality of Agnes.

One of the major themes of the novel is the cruel treatment of governesses and of women that recurs throughout Agnes Grey. Agnes is humiliated and degraded by the parents of the charges she is hired to teach. They undermine her authority with the children; in fact, they give her no authority over the children whatsoever, and then criticize and complain when the children's behavior does not improve under Agnes' tutelage.

The children are wild and unruly, talk back to Agnes, and are lazy and uninterested in learning anything Agnes has to offer. The men who head the families want nothing but peace and quiet and perfectly behaved children, but refuse to support Agnes when she tries to discipline or change the children's behavior for the better.

Besides book learning, Agnes tries to impart empathy in her charges and teach them the ability to empathize with others, but to no avail. As with the book learning, these children do not pick up on life skills lessons either.

The theme of isolation is a major one also in the novel. Once Agnes becomes a governess she is isolated by the long distance she is from her loving family. She is further isolated by the alienation of her employers who want nothing to do with her outside of her working hours. In the novel, Agnes uses this isolation by the family to her advantage as an opportunity for self-study and personal development.

While Agnes Grey is a well written and witty novel, it is overshadowed by Emily's Wuthering Heights, and Charlotte's, Jane Eyre. Agnes is passionate about her work, but more Puritan when it comes to love. Her husband is no dashing Byronic hero or obsessive lover. There is no great passionate love for Agnes as there is for Cathy in Wuthering Heights or Jane in Jane Eyre.

While I found the novel very interesting, it did not move me like the other two novels did. I would say this is written more in the feminist vein as it tries to portray the condition of governesses in early Victorian England. I found it interesting from a teaching standpoint as I have experienced the unruly and spoiled children and the apathetic parents.

I also think it is interesting to read as part of the Bronte sister's trilogy: Emily's Wuthering Heights, Charlotte's Jane Eyre and Anne's Agnes Grey. Over time each novel has become an English classic. All were written at the same time and published together in 1847. Each is different in its own way and each is a different love story, but each is similar in the depiction of the lonely and bleak moors in Yorkshire. 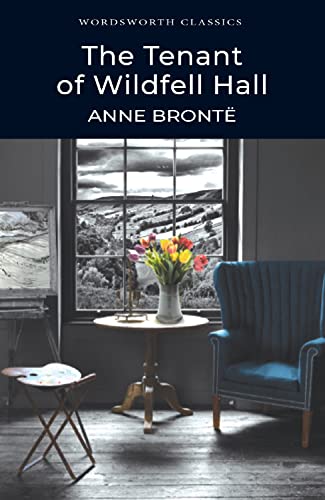