David Morrell: The Spy Who Came for Christmas (A Review)

I am a reader who loves mystery and suspense, exotic locations, accurate details, and enticing protagonists woven into a cohesive tale.

A Christmas Novel Packed with Accurate Descriptions and Subtle Action

"The Spy Who Came for Christmas" opens with a description of Christmas festivities in the historic district of Santa Fe, New Mexico."What a perfect Christmas Eve" enthuses a woman caught up in the holiday crowd admiring Christmas decorations along Alameda Street. The merrymakers, however, overlook a matter of life and death as three thugs, using code names of Melchior, Balthazar, and Gaspar, chase human prey. Their victim's left arm is wounded, but his uninjured right arm snugly shelters a small bundle beneath his ski parka. The injured man maneuvers through the crowd, desperately seeking a place to hide.

It is less than a perfect Christmas Eve for abused wife and mother Meredith, and her twelve-year-old disabled son Cole. Their husband and father, after a frenzy of rage, has fled the house. He battered Meredith inflicting damage to the side of her face, smashed all the landline telephones, and took Meridith's cell phone before fleeing the home.

The quarry struggles to keep moving, and his bundle secure while fleeing through the historic district back streets. He singles out the one-story adobe house where Meredith and Cole wait for a chance to escape from their predicament. The quarry gripping his tiny bundle comes face to face with Meredith and Cole. His immediate problems are caring for the newborn baby swaddled in his arm, and winning the trust of Meredith and Cole.

"The Spy Who Came for Christmas" is a slim volume packed with:

Morrell skillfully includes the spy's versions of The Magi and The Child of Peace, the significance of roses in spy-craft, and Meredeth's tale of The Christmas Rose.

This quick-to-read novel makes an excellent holiday gift for mystery and thriller aficionados. Word of warning: Make sure the recipient doesn't already own this book. 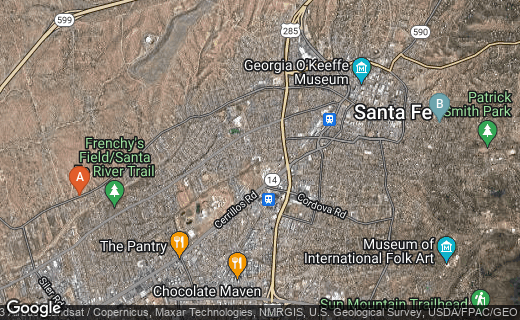 One-half of the residential street in Santa Fe's historic district where the action takes place.

The eastern half of Alameda Street, Santa Fe, New Mexico

The Christmas Rose: a traditional flower that blooms in warm climates around Christmas

The Legend of the Christmas Rose

David Morrell draws heavily upon religious and traditional beliefs to stage the settings for his novels. A paraphrase of the 15th-century German hymn, "The Christmas Rose" and the definition of sub rosa from the "Cambridge Encyclopedia of Espionage" set the stage for The Spy Who came for Christmas.

In Paul Kagan's (our quarry) attempt to enter the adobe house sheltering Meredith and Cole, he sees what he thinks is a rose. However, he convinces himself that he is hallucinating. Later Meredith tells Paul about her Christmas rose, not a real rose, but hellebore, which blooms at Christmas.

The Illustration above this explanation is a copy of an old engraving of a Christmas rose (hellebore) from a 19th-century botanical journal about medicinal plants.

The Magi: Kings who were not kings, but secret agents.

To relax Cole and gain his trust, Paul Kagan tells a story of the Magi, which few people know. Kagan learned this version of the Magi story from one of his instructors at the Rocky Mountain Industrial Academy, a covert espionage training facility. The instructor, a legendary spy-master, was rumored to have once been a Jesuit priest. It's a neat story that puts a logical spin on the Magi story knowing the little factual information that has survived.

According to Kagan, the magi were priests with tremendous political influence. They crossed the desert at night to avoid the desert's heat and Roman soldiers. With skillful storytelling, Kagan draws Cole into this story of traditional spy-craft and double agents.

Kagan uses questions that need an answer as one way to pull Cole into the story. At the story's end, Kagan tells Cole that his instincts are so good, he should think about becoming a spy.

The Dove of Peace

The Child of Peace

The Spy's Version of Christmas: Keeping the baby safe

The bundle that Paul Kagan clutches in his uninjured arm is the baby boy born to the wife of a Palestinian pacifist who is also an obstetrician. The father sees his child as a symbol of what people desire for their children. His son, he argues, represents every Palestinian. The son, born in the U.S., will go back to the Middle East with the doctor and his wife "as a symbol of his hope for the future of all children in the region...if people truly love their children, they'll do everything possible to demand a lasting truce."

A terrorist organization that opposes the Palestinian's ideas has paid a group of Russian mafia a significant sum to steal the baby. The terrorists will educate him and eventually turn him into a suicide bomber. Paul Kagan is an undercover agent embedded in the Russian mafia group and with the three thugs to steal the baby. At the last minute, Kagan grabs the baby and searches for its safety.

Kagan's story loosely parallels the Magis' story and their interactions with Joseph, Mary, and Jesus, the shepherds, and Herod and his troops. The ultimate goal in both Kagan's and the Magis' stories is to keep this baby - the child of peace - safe.

More Action from David Morrell: The Brotherhood of the Rose Series

Readers who want more books like "The Spy Who Came For Christmas" should investigate the first three books of David Morrells' Brotherhood of the Rose series. These three novels were written and published in the 1980s by Morrell, but are still as fresh as they were yesterday. Morrell, as he did in "The Spy Who Came For Christmas," deftly combines religion, tradition, and symbolism with non-stop action to form the backbones of these three stories about orphans and espionage.

David Morrell explains the series, "As a child, I'd been put in an orphanage, so it was natural that the theme of orphans fascinated me. But after my son Matthew died in 1987, I found myself writing about fathers searching for sons. I could no longer identify with the series. The trade paperback includes a short story, "The Abelard Sanction," in which I tie a loose plot thread (the motive for the attack on Saul's village) that would have led to the fourth book in the series."

Who is your favorite mystery thriller author?

I want "The Hundred-Year Christmas" by David Morrell for my carefully assembled book collection. I would have loved to have been Morrell's friend back when he originally wrote this book - in 1983 - and had seven hundred copies printed, numbered, and signed to give out.

The book is available now (2009) newly illustrated and printed in 1000 copies, also signed. I haven't had the opportunity to read or see it, but I do have that feeling that it would fit into my eclectic collection.

This book, written in a personal manner by Morrell, is available from most bok-sellers.

I like all kinds of thrillers and mysteries as long as they are well-researched and well-written. Below are five of my favorite genres or kinds. Do you agree with me on any of the five? Which one, if any?

What is your favorite type of mystery?