Ms. Inglish has coached sports for 35 years and seen changes made to recognize outstanding skills in every gender and age group.

The sport of baseball enjoyed all-female teams during World War II, when the men went off to fight with the Allies against Nazis and Pearl Harbor enemies. Those teams played hardball, not softball, not even fast pitch softball. It was baseball and women played it well. We even have a National Women's Baseball Team!

All that having gone before, why then did it take 170 years to find a woman major league baseball coach?

As of 2015, American Major League Baseball had no female general managers, umpires, or coaches, other than occasionally during spring training and similar circumstances.

Who is Justine Siegal?

America's male pro baseball system hired no women coaches that we can find prior to 2009. The woman hired in that year was the same Justine Siegal, employed to coach first base for the minor league Brockton Rox. They play at Campanelli Stadium at the Shaw's Center.

The Rox were a member of the Canadian-American Association until 2012, when they joined the Futures Collegiate Baseball League (FCBL) for 2013. Since then, they have played each new season from June through mid-August, gaining popularity under the ownership of Chris English, former Hedge Fund manager.

A few women have held responsible positions in MLB front offices, but Siegal's two-week coaching stint is speculated to result in subsequent long term coaching within the major league. At age 40 in 2015, she has a couple of decades to contribute to that work. Her baseball card is already worth a lot of money and rising

This ESPNW Everyday Hero is the Director of Sport Partnerships for Sport in Society at Northeastern University, but has a distinguished list of other qualifications, listed below.

Map of the Brockton Rox in the City of Champions 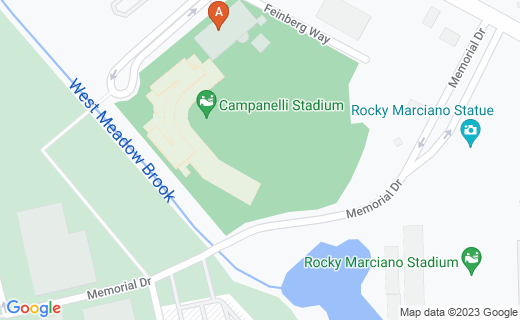 For everyone who has been told to quit their dream for being a girl or some other seriously lame reason. Ignore them. Dreams can come true.

From October 4 through October 17, 2015, Justine Siegal became an Instructional Coach for the Oakland A's.

1) Training infielders (three base guards and the shortstop between second and third base).

"Pepper" is a common exercise drill. One person hits brisk grounders and line drives to a fielders standing about twenty feet away. They catch and toss back the baseballs. In this way, they train to catch grounders as well as fly balls.

2) Hitting fungos for fielding practice by the players.

A fungo is a hit to a fielder by a coach using a "fungo bat." This type of bat is longer and smaller in diameter than a standard baseball bat. The coach tosses a ball up in the air for himself/herself and hits it.

3) Pitching for players at batting practice. Siegal will pitch balls, because a ball pitching machine is not always used.

Baseball For All Board of Directors

Justine Siegal's Baseball For All foundation has been featured by the International Women's Baseball Center, which has distinguished members itself:

In 1846, the New York Knickerbockers ball club played America's first official game of baseball. Since they were the only baseball team in existence, they played against a team of cricket players, according to The History Channel. America's first National Baseball League team was recognized in 1858.

I first heard of the English children's game of rounders in a Sherlock Holmes pastiche story about the Great Detective's adventures in America.

In the tale, Holmes visited a "Base Ball" game attended by Mark Twain, one so crowded that young boys were most successful at pickpocketing from underneath the jam-packed bleachers. They even nabbed Twain's silk umbrella. Meanwhile, Holmes complained that the ticket prices were too expensive for watching a child's game of rounders. (References: My Silk Umbrella, by Darryl Brock).

Games that look a bit like baseball date back to 18th century America and the Revolutionary War. Two English games, rounders and cricket, are the most well known of these.

By 1776, variations of such games were played in schoolyards and on college campuses across the colonies. They became even more popular during the Industrial Revolution when men went to work in factories during the mid-19th century and looked for recreation after work.

In September 1845, a group of New York City men founded the New York Knickerbocker Baseball Club. A volunteer firefighter and bank clerk named Alexander Cartwright, wrote and compiled a set of baseball rules. This was the beginning of the the playing diamond, the foul lines, and the three-strike rule. He was smart as well, abolishing the dangerous activity of tagging runners by throwing hard baseballs at them. He saved lives with that change.

The change to allow women into the modern major leagues took longer to achieve.

Some Stadiums Banned Pepper as Dangerous

Implications for the Future

Watch the career of Justine Siegal and those of the girls and women supported by Baseball For All and the recruiters of the USA National Women's Baseball Team. America has some very accomplished talent in baseball and some of it is female.

The United States is home to dozens of women's baseball teams of all ages now, many of whom compete against international women's teams and even some men's teams.

The 2018 Women's Baseball World Cup in August was the eighth world tournament of women's baseball, this time held in Florida. America lost the Bronze Medal by about four points, behind Japan, China, and Canada. During the biennial event, teams from several nations compete in baseball - hardball, not softball.

An early baseball was patented by John E. Maynard on May 8, 1928 and received the number US1668969 A. Many additional patents exist for related bats, specialized practice balls, and other equipment.

Look for new patents on baseball equipment in the future to accommodate all people who want to play, no matter their ability or "dis"- ability.