Crater Lake Lodge is one of the many hotels around the country listed as one of the Historic Hotels of America, which are part of a National Trust for Historic Preservation. However, having stayed at a few of the historic hotels in the Northwest, I will tell you that Crater Lake Lodge is going to be top of the list for anyone who visits--hands down.

This 71-room lodge, extensively remodeled and reopened in 1995, built to resemble the original lodge which opened in 1915, is a beauty in and of itself. However, perched as it is on the literal edge of Crater Lake--it doesn't get much better than that. If you can step away from the view and get inside the lodge, more delights await you.

Once you're inside the lodge and feel the warmth, in part due to the beautiful use of ponderosa pine bark that lines the lodge's walls, you can't help but sigh in appreciation. If you spend a little time in the historical room depicting the timeline of the Crater Lake Lodge you'll have a fuller appreciation of the fact that the lodge was never demolished as was planned in the 1980s but instead was gutted and rebuilt from within--which leaves us with the beautiful historic hotel standing today. It is truly a work of art.

Visiting Crater Lake, I've overhead many people ask the question I used to ask myself--"Is this one of the wonders of the world?" The answer is no it isn't--but in this author's humble opinion, it should be.

There is no place on earth that can be compared to Crater Lake. The lake and Crater Lake Lodge are part of the Crater Lake National Park. The fact that you can travel to such a pristine setting and enjoy the ambiance of this historic lodge is amazing.

If that wasn't enough of a pitch for seeing it, consider the photo below which doesn't do the view justice by a long shot. The "lake view rooms" overlook Crater Lake in all her magnificent glory and made this author wish for more daylight hours so I could just gaze at her beauty.

If you want more shock and awe, enjoy the photo from the "back porch" of Crater Lake Lodge as well as the video. It's the most amazing deck view you'll ever have in your entire lifetime. You are right there and the snapshots will forever be imprinted on your soul.

This author has been to visit Mt. Rainier National Park and stayed at the lodge there. It is a fascinating place and the lodge itself is again, a must see to believe kind of place. However, there, you can pay about the same price as at Crater Lake Lodge and have a room that you are barely able to turn around in.

Depending on the season or how busy they might be due to the weather, you also may find yourself with a bedroom/closet to sleep in and a bathroom and shower down the hall. However, because of its raw beauty, people don't seem to mind.

That said, for the money, this author found that the rooms at Crater Lake Lodge were more than adequate and well appointed, spotlessly clean and what can I say? The view was to die for.

It should be noted that the lodge closes in mid October due to snowfall that usually accumulates over 500 inches and can cover the roof of the lodge. Since it sits above 7100 feet on the rim of the lake, that isn't surprising.

Snows also cause the north entrance to close at times. This author has visited in July and there has still been snow on the ground.

If you have traveled the roads around Crater Lake, especially coming in from the north entrance, you can see why road closures become necessary with the precipitous drop off the side of the road literally hundreds of feet.

Keep in mind that there are no phones in the rooms and no TV. There are also no TV's in the lobby or anywhere in the lodge that this author ever saw--it was a welcome respite.

Pets are not allowed in any of the rooms.

For groups and/or meetings, inquire about bookings for 10 or more rooms. Rooms are available at the lodge and also at the Mazama Village cabins. Discounts do apply for groups.

While this author has read some less than complimentary reviews of dining experiences at Crater Lake Lodge, I would have to disagree.

During our recent visit, we indulged in eating lunch, dinner and then breakfast at the lodge to get the "full experience."

We found the food to be very upscale and while on the higher side considering price, thinking about it, where we were, the ambiance, the view--all I could say in the end was it was worth it.

We found the menus to have a wide range of options for a national park lodge and the food was all prepared to our satisfaction.

The dinner menu was extensive and the selection of wines and beers great for traveling foodies.

The lodge dining room does concentrate on foods of Northwest cuisine but we found them to be delectable, tolerable in the price range and altogether enjoyed every meal we ate at the lodge. The fact that they buy Oregon products and are ecofriendly in all their approaches at the facilities made us even happier. When folks are doing good things, you don't mind spending a little more for something.

For those wishing to save a bit, drinks and bar type foods are served in the lobby area where you can sit with friends and chat while enjoying the same good food, play a game or even stroll out onto the back porch to worship the view.

This author's feeling on the entire dining experience was peppered with the thought--"just think where you are." I think we would have gladly eaten sticks for dinner!

Things Not to Miss at Crater Lake Lodge 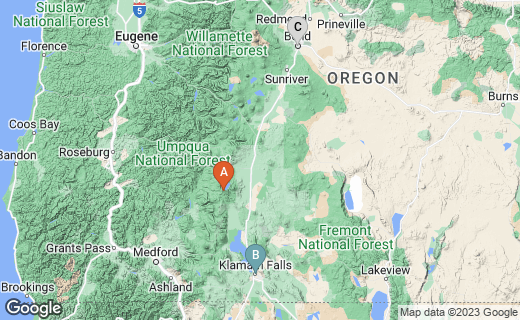