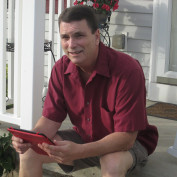 Joined 11 years ago from North Carolina

This article on the Lake Norman Monster ultimately asks whether the creature (or creatures) is the result of radiation from a nuclear power plant that's created its very own atomic water monster.