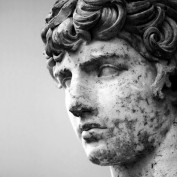 Joined 22 months ago from Europe

As a passionate reader, I have delved into many topics ranging from classic literature and philosophy to history and psychology. Additionally, I also like to write fiction and poetry.

Belgian Literature: Some Classic Authors and Works You Might Wish to Know

Belgium has a fascinating cultural history of its own. As a neighbour of France, Germany, England and the Continue » A poem about devotion to a bride, a groom, a newborn, a pet or any other entity that can fill a heart with reverence.