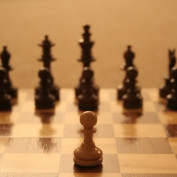 Hello, I'm ProjectResolute. I love writing on hubpages since it is very easy to get your content in front of many eyeballs! This site also has a wonderful community that loves to share their unique insite and knowledge.

The best free chess engines for game analysis, playing against, engine vs. engine bouts, and anything else you might think of. Warning! These chess engines are super powerful!

Here's a collection of free UCI-compatible chess programs for running UCI engines such as Stockfish, Komodo, and more. These programs are great for analyzing games, managing pgn files, and more!

Strategic Games That Evolved From Chaturanga, an Ancient Board Game

The history of chaturanga is a fascinating one. This ancient game has evolved into many different games we play nowadays, including chess and xiangqi. Learn more about this game and how it evolved.

How Big is the Number Googolplex? A Perspective Look Into Big Numbers

There is no biggest number, but really, how much is a thousand, a million, a googolplex or even a googolplexian? This look into big numbers may give you an idea how big they are.