Gorillas Live in Groups That Vary in Size From Two to Twenty Individuals. Such Groups are Composed of at Least one Male, Several Females and their Offspring.

Justifiable Means to a Endangered Death.

In a split second terror cries and screaming bystanders had to stand by and witness as a 450 pound silverback gorilla snatched up a four year old boy who had somehow climbed over the steel barriers and fell into the moat in this 17 year old gorillas habitat. This is a sad story for me. I happen to love silverbacks. Gorillas happen to be very intelligent mammals. I call them mammals, because in my opinion it makes them sound less intelligent if you label them as animals.

They can learn sign language, use tools, understand commands, and they are self aware. Don't make the mistake that I was not frightened for the little boy. I'm sure on Sunday 29 the little boy didn't think as his parent was driving on the way to the Cincinnati Zoo that he was going to climb over the barrier and personally meet a gorilla face to face. Being a single father myself of an 11 year old girl makes me think of some pretty angry questions.

For example I still don't feel comfortable letting her ride her bike without me being there watching out for her. There is an entire movement on Facebook right now wanting to hold the parents liable for neglect. This morning alone there were 10,000+ signatures to have them charged for what happened. I can say I agree with them. The young boy did get jerked around and beat up with some scrapes and bruises, but otherwise the doctors gave him a clean bill of health and he was discharged the same day.

What people need to realize out of all of this is there are only two responsible parties in this whole incident. This is not going away for awhile. Everyone wants to point fingers right now, but like I said only two parties are responsible, and whether or not they agree, the parents and the zoo are the guilty in this tragedy.

The parents will be judged for not watching out for their child. Questions will come and keep coming like where were you when the boy was climbing the barriers. From what I have gathered from the news conference earlier today, the barriers are only approximately 3 feet high. My 2 year old could climb that.

Then Mr. Maynard went on to say "Anyone could climbed the barriers if they wanted to". Then he arrogantly went on comparing the incident to burglars gaining access to a locked house or a car. Are you serious I'm losing my mind, to say that was insensitive and Ludacris, is the zoo's representative seriously saying it's the little boys own fault.

We don't even know if the gorilla named Harambe even harmed the boy. Yes he was 450 pounds, yes he was 6 times stronger than grown men, but has anyone thought that maybe Harambe was trying to protect the boy. I mean to say the boy fell 15 or more feet into the moat. that alone could have killed the boy.

In highly intelligent mammals, such as gorillas or humans when we see some thing like a baby or small child get hurt we instinctively rush to help to protect the young. Harambe probably saw the kid fall and thought he was hurt, and when everyone started screaming and yelling he started dragging him along because he was frightened. The gorilla more than likely had never been in a situation like that before and went into survival mode.

When they shot Harambe otherwise known as "Handsome Harambe" the boy was crossed between his legs, like trying to calm a frightened baby. I'm not saying that he would or wouldn't have killed the boy, because he was also frightened and certainly had the strength to kill or seriously harm the little boy. Harambe sure didn't think when he woke up that morning it would be his last, but even humans don't have those answers.

Now it's all said and done maybe the mother of the boy and the zoo learned something from the close call. For the mother I hope they watch after her son better. Believe me it seems like you blink your eyes and 10 years gone by and your kid has grown up. You have been given a second chance not to miss another moment.

Now on to the zoo. I have 2 children one is 11 and the other is 2. I can't imagine my life without them, and if any of my kids got hurt in a public business that deals with dangerous animals, and I found out the zoo could have upgraded their safety measures, like putting a net to catch you if you lean a little too far and fell. At the least it would keep you out of the habitat safely until someone could get you out, just food for thought.

On to the only life that ended in this incident, just a few days after his 17th birthday. "Handsome Harambe" was a very special intelligent being who gave many memories to kids that loved the zoo. Western lowland gorillas are usually quite peaceful unless provoked by either another gorilla trying to take the alpha male position. Or by humans pushing them out of their homes.

These silverback gorillas are an endangered species, and more and more die soon before their time because of either the logging industries, mining operations, or poachers. There are less than 200,000 left in the entire world. Soon they will only be in our memory's and after that only in our history books. Sad thing is another one died before his time.

I am glad the boy survived and I hope he has a long and fruitful life.

"Handsome Harambe" you were truly a beautiful work of nature. You will truly be missed.

For mice or hamsters, this will give your pet endless fun time out of the cage. 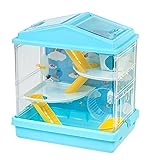 Taken on his 17th and last birthday.

You were a strong and proud silverback, and I am proud I had the chance to write about you.

More and more silverback die every day. They need as much support as they can get.

The western lowland gorilla is the smallest subspecies of gorilla but nevertheless still a primate of exceptional size and strength.They possess no tails and have jet black skin along with coarse black hair that covers their entire body except for the face, ears, hands, and feet.

The hair on the back and rump of males takes on a grey coloration and is also lost as they get progressively older. This coloration is the reason why older males are known as "silverbacks". Their hands are proportionately large with nails on all digits, similar to that of a human's, and very large thumbs.

A male standing erect can be 5–6 feet tall and weigh 300–600 pounds .According to the Guinness World Book of Records, the average male is 370 lb and stands upright at 64 in. Males in captivity, however, are noted to be capable of reaching weights up to 400 to 500 pounds.Females stand 5 feet tall and weigh half as much as males.

A silverback gorilla in his prime has the physical strength of 7–8 Olympic weight lifters but this claim is unverified. Western gorillas frequently stand upright, but walk in a hunched, quadrupedal fashion, with hands curled and knuckles touching the ground. This style of movement requires long arms, which works for western gorillas because the arm span of gorillas is larger than their standing height.

More than half of western lowland gorillas eat fruits. They also eat leaves, seeds, and stems. They can also be known to eat caterpillars, termites, and ants. Mostly vegetation is their main diet, they rather eat vegetation apposed to less satisfying or appealing food.

Harambe New At The Zoo.

In a fight who would win?