Acrylic Aquariums versus Glass Fish Tanks: Which To Buy

Acrylic aquariums, first introduced to the public in the early seventies, have been gaining in popularity in recent years. Though the quality of acrylic fish tanks has improved over the decades, there are still some drawbacks which should be considered. That said, there are also plenty of drawbacks to glass aquariums, and of course both have their strong points as well.

I’ll say up front that I really only see four real benefits that acrylic fish tanks have over glass fish tanks, and those benefits are rather conditionally based. By this I mean that if those conditions don’t apply to you, then the advantages of the acrylic aquarium over the glass aquarium are fairly pointless. 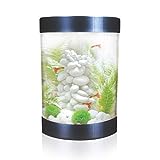 The first of the four advantages an acrylic aquarium has over glass aquariums is the greater ease in creating various shapes and styles. This is something that cannot be easily done with glass. In fact, acrylic has really revolutionized the range and appeal of aquariums. Most of the new tank designs you're seeing on the market today are made with acrylic. If you’re looking for something outside of the ordinary, a custom acrylic aquarium is definitely the way to go.

The second advantage is in durability, as in acrylic doesn’t break anywhere near as easily as glass, of course. If you have concerns about a glass tank breaking in the environment in which you plan to keep it, then again, under that condition, an acrylic aquarium may be a better choice for you.

The third real advantage that I see is only in the case of much larger tanks. It is true that acrylic aquariums are obviously much lighter than glass aquariums. In smaller tanks I don’t see this as much of an advantage. A fish tank isn’t something we often carry around. Once a tank is filled with water, the original weight of the empty tank becomes negligible. Unless the resting place of the aquarium requires being weight conscious, this isn’t generally an issue. If planning on having an aquarium shipped to you, it is unlikely that buying acrylic to save on shipping will actually save you any money. Acrylic tanks are generally much more expensive than glass tanks anyway, so any savings in shipping would almost certainly be entirely lost in the actual cost of the aquarium itself.

However, in the case of larger tanks the lighter weight of the acrylic tank can definitely be an advantage. At 75 gallons an empty glass tank weighs 140 pounds. Not only will that be an awful lot of weight to personally have to deal with - even with a little help - but it will be much more weight on your fishstand and strain against your floor, which in some settings may be a problem.

The weights just keep going up with tank size. A 150 gallon tank weighs 338 pounds, empty. With this in mind, when purchasing a larger sized tank, based on your situation, you may want to consider choosing a good acrylic tank.

The fourth and final real advantage I see in acrylic aquariums vs. glass aquariums is that they are much easier to cut or drill through for adding saltwater overflows or other specialized plumbing. Tempered glass cannot be successfully drilled at all and nontempered glass will require special drill bits or cutting tools. For many people this would never be an issue.

Other Benefits of Acrylic Aquariums

Acrylic tanks in good condition do make better display tanks due partially to the thinner material and partially due to light refraction. The image is less distorted to the viewer than it is through glass. However, since the acrylic surface is so susceptible to scratching and yellowing, this advantage is dubious. Additionally, for most home aquarists, glass aquariums display more than adequately.

The greater insulating properties of acrylic means an acrylic aquarium can retain heat more efficiently than a glass tank. This can be a good think for a tropical aquarium, but not such a great thing for coldwater fish or reef tanks. It’s a lot easier and less expensive to heat a tank than it is to cool one down. So again, this benefit is a questionable one.

Among the most commonly cited problems with an acrylic aquarium is that they scratch quite easily. Merely passing by one can mar the surface should an open jacket rub it or a purse bump against it the wrong way. If you have small children, or the tank will be positioned in a high traffic area, an acrylic tank could quickly become somewhat of an eyesore.

Performing regular maintenance on the tank, or during initial setup, a great deal of care must be practiced to avoid bumping anything up against the walls of the tank. Algae brushes must be of the kind designed for use on acrylic aquariums, as otherwise the tank walls will become a scraped up mess. Extra care should be given to avoid accidentally picking up a piece of gravel with the algae brush, and running a long, devastating scratch mark along the tank.

There are kits to repair scratches to acrylic, which do generally work pretty well, very well usually. The kits are moderately expensive, and if the marring of the tank is interior based, you may need to empty the tank to at least below the level of scratching to allow repair. Additionally, many of these polishes are toxic, and not recommended for interior use.

Novus makes acrylic polishes which will fill in any scratches, though repeated applications may be required. There are other companies offering scratch removal kits as well, but Novus has been doing it the longest and is quite arguably the best.

This isn’t necessarily a negative that should automatically discourage a person from buying an acrylic aquarium. However, depending on the circumstances of how the tank will be used and what environment it will be kept in, it is definitely something to consider.

Acrylic Aquariums Can Bow Out Under the Weight of Water

If not adequately supported at both the bottom and the top of the tank, acrylic aquariums can split at the seams or bow out at the top. Not bow out as in a nice bow-fronted tank, but bow out as in spilling water all over your floor. The acrylic simply isn’t strong enough to hold the weight of the water.

To combat this, some manufacturers use extra thick acrylic on the bottom of their tanks, and most of them will utilize a heavy frame at the top to prevent bowing. These top frames can sometimes get in the way. Should the acrylic tank not have the protective thick bottom plate, then traditional topless fish stands won’t work well. A sturdy stand with a strong and solid top will be required.

Aging and Yellowing of Acrylic Aquariums

As acrylic ages, it often yellows or grows cloudy. Advances here have been made utilizing UV stabilizers. If you choose to go with acrylic, and want it to last over the years without yellowing, be sure the aquarium you choose does use this technology.

Acrylic tanks can cost over twice as much as a comparable glass tank of the same size. This isn’t because they cost more to produce, or because they are necessarily better than glass aquariums, but is due to the greater amount of loss involved to the company. Acrylic tanks are often scratched or even cracked during shipping, requiring immediate replacement by the manufacturer. This loss is of course recouped by charging higher prices to the consumer.

Deciding What's Right For You

The biggest charges against glass tanks is that they can break (but seldom do) and that they cannot be molded into a great variety of shapes.

The biggest charges against acrylic tanks is their inherent flexibility which can cause bowing out and busting of the seams, the discoloration and lack of clarity caused by aging, and the scratch factor. Through better construction and UV stabilizing, the first two of these problems have become much less of a factor. If cautious and situated in a safe environment, the scratch factor may be overcome.

In the end it will come down to what best suits your needs and budget.