Adopting a new pet can be a struggle sometimes. Which one do you choose? What factors do you look for in your new friend? Will they like you? Breed, color, and personality all matter, but sometimes there's just something special that draws you to one pet over the rest. 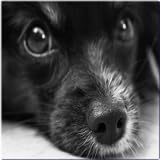 Carbon: Skylar, I understand that you have adopted two humans, is that correct?

Skylar: Yes, that is correct. I have two mommies, Karen and Erin. Karen is my first mommy and Erin is my second mommy.

C: How did you originally meet your first mommy?

S: When I lived with the family I was born to, they moved into a nice neighborhood with a community garden at one end of the road. I explored outside, but slept inside, and the garden was one of the places I loved the best. Karen was there almost every day, too, and I noticed that she planted tomatoes. Now, I love tomatoes, so I gave her my best "hungry man" stare until she gave me a cherry tomato of my own to eat. I kept visiting, and she warmed up to me, even petting me and talking with me. Soon, we were friends.

C: But you had another family at that time. So, how did you decide to adopt Karen?

S: That was a tough decision, and not really of my choosing. My original family had to move to take care of Grandma, and they told me I couldn't come along. They loved me and wanted me to have a great new home, so I chose Karen to be my new mommy because I already knew her and knew she was a good human. My original family approved of my choice, but were sad to have to leave me.

C: Do you miss them?

S: Yes, I do miss them. Sometimes, if I see someone that reminds me of my girl, Karen can see a faraway look in my eye. But, I am very happy with my life now, and I hope they are happy with their lives.

C: Was the transition tough?

S: Actually, no. I had a few days where I was depressed, but Karen made sure I knew I was loved and cared for. After about a week, I was doing just fine, and back to my happy, goofy self.

C:  So what about your other mommy, Erin?  How did you meet her?

S:  She is a friend of my first mommy and my daddy.  She moved in with us last year and stayed for most of the year.

C:  When did you know you were going to adopt her?

S:  I knew almost immediately.  She was going through a rough time, and I could tell she needed love and comfort.  The first day she came to live with us, I went over to her and meowed as loud as I could, saying her name.  I plopped myself down in her lap and wouldn't move.

S:  She loves felines, so she accepted me.  It took her a couple days to feel comfortable around me, but soon I was her chosen snuggler at bedtime.  I trained her to feed me from her plate.  Humans are very trainable, most of the time, but you have to be persistent about it.

C:  Thank you, Skylar.  It sounds like you chose two nice humans to be your mommies.

Carbon:  Lydia, you are Skylar's littermate, correct?  And you two have stayed together since you were kittens?

Lydia:  Yes, that is correct.

L:  No, actually I didn't.  My human is of a different breed.

C:  So who is your human, and how did you adopt them?

L:  My human is a male named Scott.  He is Skylar's mommy Karen's husband.  When Skylar adopted Karen, and moved in with her, she took me along as well.  I wasn't crazy about moving, and rebelled.  I was bad, ran away, did awful things to the furniture, etc.  I feel bad about it now, but I was confused and mad.  Eventually, I forgave my original family.

C:  You said Karen took you in.  So how did you meet Scott?

L:  He was Karen's boyfriend.  A few weeks after moving in with Karen, she moved all three of us in with Scott.  Two kittens were already there, and I was pretty shaken up over the whole experience, but Scott and Karen were very understanding, as humans go.  They left me to my own devices, which included the bad behavior, and they cleaned up after me.  They never complained, just accepted me for myself.  We basically interacted as little as possible.

C:  So what changed that?

L:  After about two months, I decided one day that this was going to be my life from now on.  I explored the house, decided on a few spots to take over as my territory, and showed the kittens who was boss.

C:  Yes, since I was one of the kittens you're referring to, I definitely remember that!  Although we were very good at following your orders.

L:  Yes, you were!  Then, I wanted to show the humans who was boss as well, so I climbed onto Scott's side and sat there until he woke up.  He looked me straight in the eye, surprised, while I stared him down.  He gave up and went to sleep, and has been my slave ever since.

C:  Sounds like a good situation for the alpha cat of the house.  Thank you, Lydia.

Carbon:  So, Sara Kitty, you live with Skylar and Lydia now?

Sara Kitty:  Yes, I have lived here for a year.

C:  Where did you live previously?

SK:  My original family was neighbors with Scott and Karen.  I had lived with my original humans since I was a kitten.  Then, my daddy died while I was taking a nap with him, and my mommy Jacqui had major health problems.

C:  Is that when you decided to adopt?

SK:  Yes.  Jacqui was adopted by another cat who didn't like me, so I decided to look elsewhere.  Luckily, I didn't have to go far.  Scott and Karen were right next door, and had lots of love to share, even with the other kitties in the household.

C:  I heard you have an interesting adoption day story.  Would you mind sharing that?

SK:  No, not at all.  My new humans had made me a little rubbermaid house on their porch for the fall, and I slept there at night or in the basement/laundry room.  It got terribly cold last winter, though, and my old bones were aching.  So, early one morning, 3 am I believe, I saw the light was still on in the house.  I could hear Scott and Karen moving around and talking, and decided it was time to make my adoption of them official.  I climbed up the screen door and looked in the window, rattling the screen door as I did so they would know I was out there.  A few seconds later, Scott looked out and saw me looking in.  He opened the door and brought me in, and Karen gave me a nice warm bath.  I've lived with them ever since.

C:  What a great experience, Sara!  Thank you for your heartwarming story.

As you can see from our interviews, you can adopt humans at any age.  You don't need to be a young cat to adopt someone, or have young humans to adopt.