Horned frog of the genus Ceratophrys

The horned frogs of South America have been nicknamed ‘pac-man’ frogs in the pet trade because of their enormous mouths and voracious appetites. They are basically mouths on short legs that appear to live to eat. They are suitably fat, to reflect this, a grown frog is about as wide as it is long.

All South American horned frogs belong to the genus Ceratophrys . Although there are eight species describe, only three of them, C.cranwelli , C. ornata and C. cornuta are widely available to keep in captivity. They are very popular pets because they are large, hardy frogs that are very easy to keep. They do not move much, and hence do not need big tanks. Their fearsome obsession with food, and somewhat sinister looks makes them intriguing pets.

Ceratophrys frogs are usually described as ‘horned’ because of the skin protrusions above their eyes. As they are made of skin they are not actually hard like horns. It is not certain what advantage these horns give the frogs, it is possible that they help them blend in with the forest soil and leaf litter in which they spend their lives.

Horned frogs are ambush predators, they will generally dig themselves into the substrate and the leaf litter with only their heads sticking out. When an unsuspecting prey walks by, the frog leaps and swallows it whole. They will not disdain their keeper’s fingers, which they mistake for food, and can deliver a painful bite (they have teeth!) and will hold on for a long time. They are considered as sinister, evil animals by people in the regions where they are found in the wild. One myth about them is that when they bit, they will not let go until sunset. Another myth is that they bite the lips of grazing horses, which then die. Although in reality the frogs do not have toxins.

As expected given their appetites, the frogs grow to an impressive size, they can reach 8 inches (20 cm) in snout to tail length, and 1 pound in weight. Since they are often rather circular in shape, being as wide as they are long, they end up rather impressive looking. As usual female frogs are larger than male frogs. 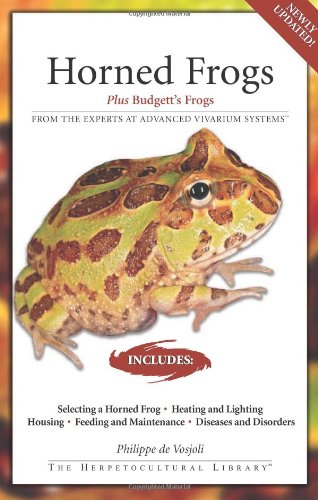 In the wild a large part of their diet is other frogs, including from the same species. In captivity they should be housed singly. It is often said that if two pac man frogs are housed together, they will both die. One from the attempt at being swallowed by its cagemate, and the cannibal by suffocating on trying to eat a food item that is too big for it to swallow.

Even their tadpoles are carnivorous, unlike the tadpoles of most other frog species which feed on algae and aquatic plants. The main food source of Ceratophrys tadpoles is other tadpoles, including their siblings. As you can imagine mating and raising the larvae of these frogs, requires a lot of vigilance to ensure that the pets you are trying to breed to do not end up eating each other.

Of the frogs available to keep as pets, Ceratophrys cranwelli starts off in pretty shades of green, but these colours fade to browns as it matures. The green colour is often maintained into adulthood by C. ornata, the Argentinian horned frog. The Surinam horned frog, C. cornuta, is usaully pale brown, but it has the longest horns and the most interesting expression on its face. Albino C. cranwelli and C.ornata have been bred and sport gorgeous yellow and orange colours.

Other than these three species, hybrid frogs called fantasy horned frogs, most usually a mix between C. cranwelli and C. ornata are sometimes available. These are usually a little smaller than either of the parent species, but also have the characteristic ferociousness and obsession with food.