Carbon, my "evil genius" cat, killed off our automatic litterbox a while ago. When I brought home a plastic box and scoop, took the automatic box out, and filled the tray with litter, he sat by it for a good 20 minutes, staring up at me. I know he was using cat telepathy on me, saying "But, Mommy, where's OUR box?"

Six cats occupy our house, and my husband and I are here to serve them. That means keeping food and water bowls full, providing laps to snooze on, in one case giving medicine three times daily, playing with them, petting them, and (most importantly) keeping their litterbox clean.

Believe me, they let me know when we are falling behind on our duties! If something is late, the meows begin, or the pacing. If the clueless humans (aka my husband and myself) don't notice, we are directed there by very persuasive (or should I say "purrsuasive") looks. So far, their plastic tray litterbox has been accepted, but the scooping is wearing the human servants down and the constant smell is offputting to the feline royalty.

When we brought home the LitterMaid automatic box, we weren't sure how the cats would adjust to it. It has a motor, moving parts, and isn't shaped like a conventional box. We decided to put it together, minus the litter, and turn it on in the middle of the living room floor so they could observe it. Well, observe it they did! They lined up like it was a football game, and watched it go back and forth, back and forth, back and forth! After a good half hour, we decided they'd had enough, but they thought differently. We put the litter in, put it in the bathroom, and dropped each of them in it in turn. Of course, the second we put the litter in, they knew what it was for, but we just wanted to make sure. They obediently used it, then jumped out and stood watching as it raked through, picking up their poop and depositing it in the little plastic tray, then putting the lid on and raking back again. All of them watched each other's poop disappear, then tried it again. Convinced this time, they left it alone until someone had to use it. Then, back again they all came to watch!

By this time, Carbon had it all figured out. The next time he used it, he dug down to the bottom and threw all the litter into one corner, preventing the rake from pushing through to the tray. Pleased with his work, he came over to us and meowed, rubbing up against our ankles, then ran back in. The rake was still moving, and he watched it with pleasure in his eyes. We obediently came in to observe what he had done, and couldn't help but laugh out loud! Eventually he stopped this behavior, but every so often he would go back to it just to see if it would still jam. 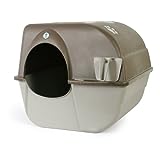 The LitterMaid automatic worked great for two and a half years, even through Carbon's machinations, until one day we found pieces of a mouse rattle toy stuck in the rake, and between the rake and the motor. We had to tell Carbon that his favorite toy AND his favorite litterbox were getting thrown out. He ignored us for a few days, but eventually came around, until THAT THING, aka the plastic tray box, came along.

He's gotten used to it now, but every so often I still get the look that says he would really, really like to have an automatic box again. "Please, Mommy, please?"

The LitterMaid's plastic tray means you don't have to scoop at all, with most litters. All you have to do is empty the tray when it gets full. The best invention ever, especially with a multiple-cat household. We are going to get another one soon.