By far, the very best fish to ever evolve is the Puffer fish. You may ask yourself, "Why the hell would anyone make such a bizarre statement?" Well, I shall tell you why. Puffer fish, (which includes a large variety of fresh and salt water fish with the capability of inflating themselves) are strait up, flat out, bad-ass!!! If you have ever seen one, you would know why immediately.

They do not swim like the typical fish. They propel themselves with the side fins and use the tail fin like a rudder. Their swimming style resembles how a helicopter maneuvers. This is the opposite of how most fish move, (by using their tail fin for propulsion).

They can be very round in shape. Unlike a lot of fish, they are not flat. They are more roundish. Some have been said to be "club-shaped." But this would be a short, thick, stubby club with the tail being the handle of the club.

They can kill you! The Japanese call them Fugu and they are considered a delicacy there, however, they must be specially prepared by a licensed chef so that the poison organs are carefully removed. Otherwise, the toxin would kill the person eating it. How cool is that?

They are aggressive! Many brackish water species cannot be kept in tanks with any other fish because they will eat them. They will eat Betas and Oscars and some Cichlids. They can kill fish several times their size by persistently nipping at their fins for days until the larger fish can no longer swim or defend itself. I have witnessed this myself on several ocasions! They are omnivoris and can also eat plants.

They inflate when pissed off! They have the ability to gulp enormous amounts of water to make themselves bigger to ward off potential predators. They only do this when they feel it's absolutely necessary. It may be that the act is painful to them so it's not a good idea to harass them into performing this way. Such asinine behavior could stress them to death! If, however, you are fortunate enough to see one do it spontaneously, consider yourself blessed. It is a wondrous sight!

They have large round eyes that make them look very cute! They are much cuter than human babies. Ladies, I suggest to you that you forget about getting knocked up and instead, get yourself one of God's greatest creations. Nothing compares to the adorable puffer. Best of all, no diaper changes or disrespect like what you get from your own offspring. The puffer fish moves it's eyes independently when it's just chill'n, but when hunting, it focuses both eyes on it's prey just before striking with it's beak. Yes....beak! The damned thing has a beak hidden in it's mouth! I'm not joking around here. It can use it's beak-like teeth to bust open crustaceans for eating. Can a human baby do that? Hell no! Human babies should be ashamed for being so inferior to the awesome puffer! Ha!

Puffers are Genetic oddities! Unlike a lot of other organisms of similar complexity, the puffer has a much more condensed genome. That means more bang for your genetic buck. Scientist are studying these genes to see why other organisms have so much extra "junk" DNA. Even smart-ass scientists know these fish kick ass! Who needs a lousy Super Colider when you can have amazing creatures like these?

So by now it should be obvious to you that puffers are the best fish, hands fuck'n down. Don't ever let anyone tell you otherwise! 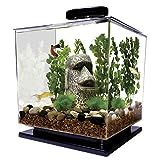