How To Mix Budgies With Other Species

Budgies are friendly, curious and feisty little birds. It's no wonder they are so loved as pets the world over. But how well do they match with other pet animals?

1. Mixing Budgies With Other Bird Races

Generally, budgies tend to be very social. This means they easily befriend other budgies, their human caretaker(s) and other birds. They especially tend to get along with others of the parrot family (Psittacidae), such as the Neophema, Cockatoo, Cockatiel, and so on. You can very easily mix a budgie with one of those breeds. If you plan to mix, be sure to provide plenty of food for both species separately, and to have enough room available to them that they can avoid each other if they should choose to do so!

Be sure to always do your homework beforehand though! Although a budgie will mix very well with, for example, a cockatiel, it doesn't necessarily mean it will be a tale of sunshine.

For example, I am the proud caretaker of Flip, a female cockatiel. She's been given the company of one of the budgies, Nala, also a female, since Nala needed a break from the more busy budgie cage. Although there are hardly ever fights between the two ladies, it is obvious that Nala completely dominates Flip. Even though she's much smaller, she's also much more feisty. She shoos Flip away from her food, has confiscated her favorite sitting spot, etc, etc...

At times, Flip will sit at the bottom of the cage in a corner, pouting. If she had a bottom lip, it would be on the floor. But since there are no fights, I let them be. A pecking order is not a bad thing, after all!

So, even though two breeds theoretically match well, you always have to look at the individual birds' personality as well! You can't just say "dogs and humans mix well" and just put two in the same room and expect them to be best friends, just because "in theory they should get along fine". The dog may be aggressive, the human may not like animals or dogs, ... There could be a multitude of reasons why they don't get along!

Always look at the personalities, then decide.

There are, however, bird races that don't match well with the budgerigar. These tend to be much larger parrots, the canary and the lovebird. Mixing these up will result in bad fights, usually with the tiny budgie drawing the short end of the stick. Therefore, it's best to avoid mixing these altogether, or keeping them in completely separated cages.

Naturally, it's important to have a large enough cage to comfortably accommodate all birds, whether or not they are of a different kind. Imagine you and your entire family were locked up in a small room for weeks, months on end, or even for a day. It doesn't take much before a tensed atmosphere builds up, and that cramped up feeling would make even the most cordial person blow up before long. The same thing is true for birds.

That being said, it is known that the rosella can become very aggressive towards other birds, even when they have plenty of space. So keep a close eye on them if you plan to mix them with others.

All Birds In A Cage

Give your birds enough time to get acquainted with each other. The first few weeks, and especially days, don't stray too far when they're all in one cage. If you're not going to be there, then don't mix them. Keep that for the moments you know you'll be around and will be able to keep an eye on things. Keeping a spare cage around is definitely not a luxury: even when they do get around, a sick bird will need to be quarantained to prevent the disease from spreading to the others.

Of course, as mentioned above, compatibility or no, sometimes, two birds just don't get along. So always try to have some sort of a shelter somewhere in the cage, where the weaker bird can hide if it feels insecure or unsafe.

Important: keep budgies separated from all other birds if they're breeding. The hormones cause them to become extremely defensive of their territory and they will not hesitate to draw blood in order to chase off intruders. Sometimes with dire consequences...

If you know a breed that is ok/not ok to mix with a budgie, please let me know in the comments. 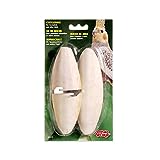 When mixing multiple species, it never hurts to keep an eye on the whole thing. While Fluffy may be very sweet and smart, her instinct to bite a fluttering little thing is very strong. All it takes is 1 second. Better be a little too suspicious and paranoid, rather than to trust the two to mingle. Err on the side of caution!

Naturally, nobody knows your pets quite like you. So always mind their behavior. Is Max playing aggressively or wild? Or maybe you see Felix with both his ears drawn back and his tail swinging left and right? Are they watching the little featherball? Maybe your cat's favorite toy has a lot of feathers too? Or maybe you see another reason to be a little suspicious, or your internal alarm, sixth instinct, gut or mother feeling is giving you a funny feeling. Don't doubt. It's better to protect from a danger that doesn't exist, to to not see the huge cannon being pointed.

Put the dog, the cat, or even the bird cage, in another room. End the possibility of contact.

Different species tend to need different things. It may be adorable to see Tweety eat out of the same bowl as your cat or dog, but it's the furthest thing possible from safe. Be strict to your animal children: a separate place to sleep, to eat, to sit, ... Keep it amongst their own kind. You wouldn't eat out of your cat's bowl either, would you? Or let your dog eat from your plate, while you're stilling in the middle of your meal?

Although budgies can be very cute and cuddly, they are prey animals that a dog, cat, snake or other species with teeth or claws would have the time of their lives hunting. A wild budgie knows this and so instinctively also knows to fear a predator. However, a domesticated budgie has spent its life learning to trust others, to get cosy and cuddle up on a human's shoulder (who is, to them, a predator)!

As everyone knows who owns a budgie, they are unbelievably curious little birds. Give them some time, and they'll come to investigate everything up close and personal. It doesn't take long for the bird to get everywhere. But all this is just teaching the budgie to suppress a natural instinct to keep itself alive. And so it doesn't take long for him or her to really start to wonder about that big ball of fur in the corner, or the spinning silky pillow on the windowsill. My birds, though very tame, still hiss at my cat when she's too close to their taste, as they should!

To avoid this, keep your budgies separated: under tight lock-in when your dog or cat is around, in another room if at all possible and especially when flying around.

As with everything, responsibility is vital when choosing to mix two or more pets. Safety is the keyword here. Especially when one of the pets you are mixing is extremely vulnerable. Be careful and take your time when introducing them, keep a spare cage when mixing birds, allow plenty of room for all animals involved to keep conflict to a minimum, and don't allow predatory animals to get near your budgie.

Your budgie will thank you!