The Canadian Eskimo Dog Breed is an Arctic dog breed. Also called the Canadian Inuit dog , Inuit is another term for Eskimo. It is considered the oldest and rarest purebred indigenous canine. It is an ancient breed that has had many name changes and is known as the”Exquimax Husky ,” or”Qimmiq,” the name it is known by the Inuit of Arctic Canada refer to it as. There is now a politically correct name—“Canadian Inuit Dog .” For 4000 years the Canadian Eskimo dog and the Eskimo people or Thule culture of the Inuit have a shared history.

They are now one of the rarest  breeds.

The Canadian Eskimo dog breed is powerful, weighing between 45 and 88 pounds and is 20 to 28”. It is a spitz breed, as are many sled dogs such as the Siberian Husky. The spitz breeds have erect and wedge-shaped ears, a bushy tail.

Some feel that the dog resembles a wolf except for the tail, which is shorter and more curved. Its coat is thick and dense with thicker hair around the neck, which makes it seem bulkier and larger than it is. The Canadian Inuit dog has a range of colors from solid white with markings around the eyes, nose and lips; red and white, black and white, sable body with white on the chest, or silver gray body.

The Canadian Eskimo dog howls rather than barks. Which is characteristic of a number of sled dogs. I found this out when we first got a Siberian Husky mixed dog. We were in a small town and a noon siren went off. The dog, which was right behind me in the car, started to howl like she was keeping harmony with the siren. She practically never barked.

”The Canadian Eskimo Dog should always be powerfully built, athletic, and imposing in appearance,” according to Wikipedia. It goes on to say that the dog gives the impression of being built for hard work, not speed.

The male should look more masculine than the female who are fine boned, smaller and may have a shorter coat.

They are good companions for adults but not recommended for children. They are loyal, brave, tough, intelligent and alert.

The Inuit dogs are loyal, tough, brave, intelligent and alert. They are also affectionate and gentle developing a deep bond with owners and are intensely loyal.

The Canadian Inuit dog, like some other sled dogs, often had to forage for their own food, which gives them a stronger, drive fro prey than many breeds. 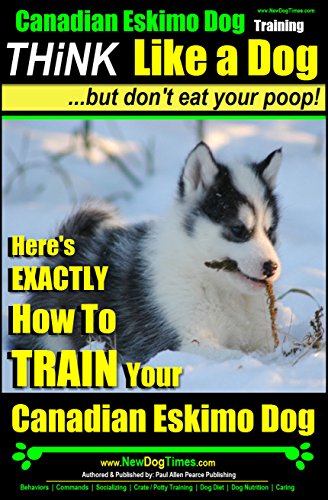 Canadian Eskimo Dog Training | Think Like a Dog, But Don’t Eat Your Poop! |: Here's EXACTLY How To Train Your Canadian Eskimo
Buy Now

Canadian Eskimo dogs need a lot of exercise more than just walking but higher intensity work, which is more than a lot of dog owners, can give. Because of the need for work and stimulation they are well suited for dog sports which might include carting, mushing.  They are trainable and submissive and intelligent. They can be subject to heatstroke so are better off in a cold climate.

The need to be brushed once or twice a week for most of the year but when shedding, which they do once a year, daily grooming is needed.

The Inuit used frozen dog urine as a medicine and the fur was that of wolves due to its resistance to wear. The dogs were a source of food during famines.