Cats Can Have Allergies

When a cat is not up to snuff

Can a Cat Be Allergic to Something?

We love our feline family members. Although sometimes we can be accused of anthropomorphizing (pretending that our pet has human characteristics) a bit too much, there are times when people and cats share experiences. Believe it or not, one of these experiences is having an allergy. Yes, cats can be allergic to their environment, their food, or other living things.

An allergy is a body’s mistaken reaction to a nontoxic substance as if it is an invader or harmful material. Just as with people, a cat’s immune system overreacts to the presence of the substance, called an allergen, and responds by releasing a chemical called histamine that causes inflammation, swelling, and itching. If your cat has an allergy, expect it to remain for life. Treatment can ease symptoms, but not cure the allergy. “Allergies are forever,” states William Miller, Jr., VMD, professor of dermatology at Cornell University’s College of Veterinary Medicine. “They may go up and down in intensity, but they don’t go away.”

Soothing to a Cat 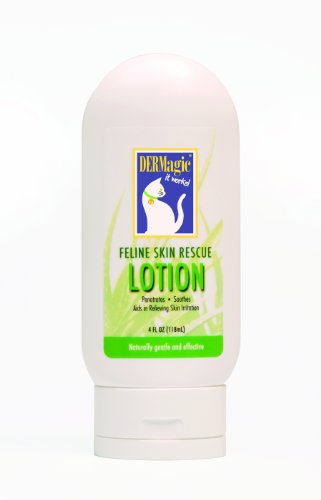 Allergy to Fleas Is the Most Common Allergy in Cats

All cats can be bothered by flea bites, but a cat with an allergy to fleas suffers with a disproportionate reaction. “Where it would take dozens of flea bites to significantly harm a normal cat’s skin, the same amount of damage to the skin of an allergic will result from just a few bites,” Dr. Miller remarks. An allergic cat’s immune system detects the flea bite and itchy, small, pale, fluid-filled lumps develop on the skin wherever a flea had bitten. Understandably, the cat starts scratching these lumps, and with its sharp claws it can quickly open sores on its skin. These cuts can become wounds subject to contamination and bacterial infection. Not a good situation.

Cats tend to be bitten by fleas mostly on the back of the neck and the top of the tail head. In a survival of the fittest mode, fleas have learned that a cat cannot easily groom or scratch those locations. However, cats with the flea allergy have abnormal bite marks—reddish, crusty bumps, for example—even in spots that have not been savagely scratched as well as those that are itching. The lower back, thighs, abdomen, head, and neck are among the areas most commonly affected.

Inhaled Substances are the Second Most Common Allergy in Cats

Cats can become allergic to tobacco smoke, dust from kitty litter; vapors from household cleaning solutions and aerosol sprays; pollen from trees, weeds and grass; ragweed; mold and mildew; dust mites; and smoke from fireplaces and candles. Sometimes, allergens such as dust mites and storage mites can contaminate dry cat food, which will make determination of the cause more confusing. Furthermore, there is suspicion that pedigreed cats have a higher genetic predisposition than cats in the general population to developing allergic skin reactions to environmental allergens.

If your vet recommends it - 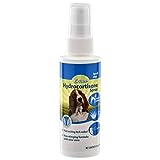 Amazingly, food allergies most often manifest themselves as skin problems. In an estimated 10 percent to 15 percent of affected cats, a food allergy also causes gastrointestinal signs such as vomiting and diarrhea.

of an allergen, a substance to which the animal’s system is abnormally sensitive.

“The itching eruptions primarily affect the head and neck area,” says Carolyn McDaniel, VMD, a lecturer in clinical sciences at Cornell University’s College of Veterinary Medicine. “They’re not always in that area, but often enough to serve as a clue that the source is a food allergy.”

“ The most visible signs of a food allergy—the persistent scratching, the emergence of skin lesions, loss of hair, and a general deterioration of the coat—do not develop overnight. Instead, they tend to become evident and intensify over extended periods of time—months or even longer—as the animal’s immune system gradually mounts a defense against certain protein and carbohydrate molecules that are present in most standard cat foods. ‘We don’t know why this allergy develops,’ says Dr. McDaniel. ‘A cat of any age can be affected, and it can occur in a cat that has been on the same diet for years.’ “

If you suspect that your cat is suffering from allergies, a veterinarian can perform diagnostic tests such as a complete blood chemistry, skin scrapings, allergy blood tests or intradermal allergy testing to determine the cause of the allergic reactions. If your vet recommends taking your feline to a specialist, follow through. Although a specialist may be expensive — he or she may save your cat from suffering and may ultimately save you time and money.