Children and the Death of a Family Pet

Almost two years ago I came home late one night to find our family pet of 13 years had died. She was a beautiful collie/beagle mix whom we adopted from our local Humane Society when she was just ten weeks old. "Shorty" was a lovable, sweet, energetic dog and we were devastated when she passed. My wife and I were able to deal with such a loss on an adult level. But it was our eight year old son who seemed to feel the loss the hardest. I still think back to that moment and the months following trying to think if we handled it properly. I feel there were some things we did right but others we could've done better to help him understand and work through his first time dealing with death.

The night of Shorty's passing our son happened to be spending the night at his grandparents. Instead of bringing him home to say goodbye we decided to tell him the next morning. We also thought it would be best to take Shorty to our veterinarian for cremation before sharing the news. The thought being we were protecting our son from seeing our pet in her final state.

We told our son the truth and felt it was important for him to hear the words "died" and "has died".  We didn't make believe that Shorty had "just gone up to heaven".  He needed to understand what death meant.  He reacted somewhat confused and a little upset.  It wasn't until we got home that it started to sink in and the questions started.  "Will I see her again?"  "Why did she have to die?"  And for months after he would cry and wish he could see her once more. He only wanted to say goodbye. I now wish we had thought more about it and given him that chance to pet and kiss her one more time. I guess we believed we were protecting him.

Children don't understand the term, "dog years". I think if we had explained to our son how animals age a lot quicker or have a shorter life cycle he may have been able to see how his dog had actually lived a long and happy life. This also may have helped ease some fears that if our family pet could die, so could his parents. He displayed some separation anxiety many months after the death and openly said he was afraid of us dying. Our constant reassurances helped somewhat, but was a long time before his fear faded.

My wife and I made sure to always listen to our son when he was upset or wanted to talk about Shorty. Even many months after, we never belittled his feelings or made him think we no longer cared. It was important for him to see we were just as upset as he was, even if we were also crying. I think if it had been a goldfish the same would apply. Children's attachments to animals can become very strong no matter what kind of pet. We would sometimes have him draw a picture of what he was feeling and it really helped to convey his thoughts. Even to this day when he draws a picture of a family he'll always include a dog. 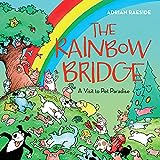 The Rainbow Bridge: A Visit to Pet Paradise
Buy Now

We decided to have our dog cremated and explained to our son what that meant. He seemed to be happy with the thought that Shorty would still be in the house with us. I think any memorial that is done for a pet needs to include the child/children. This helps them with closure and gives them a real chance to voice their thoughts and say goodbye on a different level. It's not a face to face goodbye but a spiritual wave and acknowledgement that "I'll see you again someday." Whether it's a funeral or cremation it's important to mark the significance of the pet's life and death event. Since we went with cremation we had a little memorial bench made with Shorty's name and a beautiful sentiment carved into it. We put it under a tree and our son sometimes stands in front of it and says "hi" to Shorty.

Our vet suggested a book for our son that told the story of a little boy whose dog died. But he felt better because he believed the dog walked up a rainbow bridge to heaven. It had a big impact on our son who reminds us Shorty is saying "Hi" whenever we see a rainbow.

We made the mistake of getting a new pet too soon. A year after the passing wasn't enough time and we regretted having to return the puppy to the pound. Our son was not really ready and while he did say he wanted to get a new dog it was clear very quickly it wouldn't be a good fit. We expected the new dog to exhibit the same behavior as Shorty and already know the rules of the house. Instead we grew frustrated and realized we didn't have the patience for a puppy. Our son relented, but he too knew it wasn't the right time.

The time has to be right and that means the child can talk openly about the passing of his pet. He/she has to show true interest in getting a new one and not just looking at one puppy and saying yes. I think this will have to be a feeling and judgement call on the parents part.

The passing of a family pet is a difficult time for everyone in the family, especially those with children. It's important for the parents to remember that we are on different levels than children when it comes to dealing with death and the grieving process. For most children it's their first time understanding what that means and what their feelings are telling them. It's easy to get caught up in our own grief but helping your son our daughter through the process can be therapeutic and possibly heal our wounds a little faster. 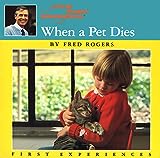 When a Pet Dies
Buy Now