Fresh off the airplane, I met my first Kauaʻi rooster at Līhuʻe's Budget Rent -A -Car. Our driver was negotiating prices at the counter when a flamboyantly feathered fowl strutted across the parking lot. Silky black tail feathers swaying, he cock-a-doodled his aloha intermittently to shuttle bus arrivals.

"That's Sentry," said Budget agent Penne, when she saw me snapping pics. "Every morning he parades himself in front of our doors."

With affection, she goes on to tell me how she shoos this clamoring cockerel off, only for him to return again and again throughout the day.

At a green light in Hanalei we remained stopped as a hen trailed by chicks paraded across the road. Looking out the window, as we made our way north toward Princeville, I noticed occasional chickens on the side of the road. We stopped to buy groceries and a rooster sprinted through the parking lot as we loaded our bags. At our Princeville timeshare, we were visited daily by roosters and hens, possibly because we ignored the sign asking us NOT to feed them.

No one has yet counted the ratio of chickens to people: I saw chickens everywhere I went. Locals say the whole thing started when Hurricane Iniki hit the island in 1992. Iniki caused millions of dollars of damage to homes, hotels and tourist attractions. Fighting cocks got loose when their crates were broken open by the storm. They proliferated in the wild by connecting with homeless rural hens.

No Mongoose on Kauaʻi?

72 Jamaican mongoose were brought to the Big Island in 1883 to get rid of the rats. This was the brainstorm of some poor soul who did not realize that rats are night creatures and mongoose are day creatures. The rat population was unaffected and the egg loving mongoose contributed to the extinction of Hawaii's ground nesting birds on all but two of Hawaii's isles. How did Kauaʻi avoid the mongoose? Offspring of the jamaican mongoose were later released on Maui, Molokaʻi and Oʻahu. Kauaʻiwas spared when an angry dock worker, bitten by a caged mongoose bound for the Garden Island, kicked the cage into the ocean. There are occasional rumors of Mongoose on Kauaʻi. In February of 2004 a credible witness saw one and traps were set in an effort to catch it.

Cockfights are popular in Hawaiʻi and throughout the world. They have been around for over 2500 years. Cockerel owners, pit their roosters against each other in fights to the death in this bizarre subculture. Sharp metal spokes called gaffs are attached to the bird's legs so lethal damage can be inflicted. In November of 2009 the Kauaʻi Police Depart (KPD) broke up a cockfighting event attended by more than 300. Cockfights were in progress and 15 roosters were dead when KPD officers crashed the party. More than 100 roosters, $70,000 in cash, 240 metal gaffs, numerous wooden crates used to transport the animals and a bit of marijuana were seized by the KPD.

Kaua'i Humane Society Director Becky Rhoades said the conditions of the injured birds were "horrible." 20 cockerels had to be euthanized.

"Practices such as cockfighting and dog fighting cause acute suffering and physical harm to animals and desensitizes both children and adults to the value of life and should be eliminated," Rhoades said.

While many visitors and tourists are kept awake and angry due to the ceaseless cock-adoodling, the locals are accustomed to their red crested neighbors. Kauaians I spoke to had names for the roosters and hens inhabiting their backyard or garden. "They eat centipedes and they are clean," said Kino who was selling souvenirs at a popular lookout. "They have their place here now." The Health Department tests often for avian flue with no positive results so far. Perhaps God and Mother Nature are chuckling as they watch a bizarre version of Alfred Hitchcock's The birds become real life on Kauʻi.

Who is responsible for the Kauai chicken infestation? 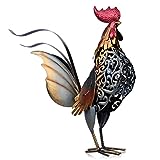