Diary of a Cackleberry Farmer (November 2015)

We have had up to four roosters and fifteen hens. We have downsized since moving to town but still have a few chickens.

Well November is almost over and while my friends in the US of A have been enjoying their Thanksgiving celebrations, we here in Queensland, Australia having been sweltering in the heat (38 degrees Celsius yesterday) and beginning to realise that Christmas is just around the corner.

It is a Hansen tradition to erect our Christmas tree and hang the decorations on the 1st December each year and that is only a couple of days away. Thankfully we completed most of our shopping for presents early this year so the next few weeks won't be so stressful trying to think of last minute gifts.

The good news is that my wife Kathy has finally returned home after her six week sojourn in Darwin. Even though I like my animal companions, it's wonderful to once again have human company (especially my wife).

When she arrived back in Queensland the weather was still pleasantly cool, especially at night, so Kathy was treated to a couple of weeks relief from Darwin's oppressive tropical heat. For the last week however we here in South East Queensland are enduring a record breaking heatwave, so her reprieve was short lived.

Now for a little geography lesson For non-Australian readers. Darwin is the capital of the Northern Territory and 3492 kilometres north-west from Brisbane, Queensland's capital and closest airport to where we live at Ballogie. So in order to get from Darwin to Ballogie, Kathy had to endure a 3 1/2 hour flight followed by a 3 1/2 hour drive. 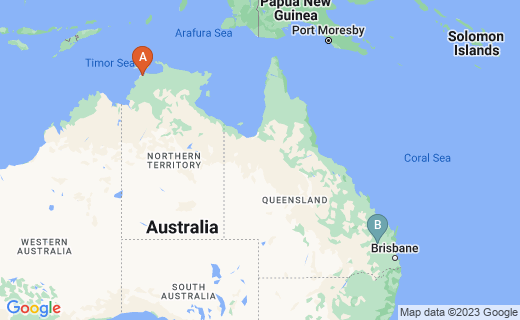 Life Away from the Farm

About a week before Kathy was to fly home we were informed by our eldest granddaughter, Chloe, that her high school graduation ceremony was on 13th November, and she asked if we would be able to attend. Kathy was due to arrive back in Brisbane airport at 5.30am on the morning of 12th and had to be home to teach a weaving class on 14th. It was pushing it and meant we would have to stay in Brisbane for an extra day and then travel home late at night immediately after the graduation, but we decided to do it.

Other major November events included grandsons, Ash and Dylan (same family) both having birthdays as well. In fact it was Dylan's first, and we went to his birthday party in Kingaroy. Their father, Jared (our middle son) competed in his first Muay Thai (Thai kickboxing) fight in over ten years and emerged victorious after three gruelling two minute rounds. He now has the enviable record of three fights for three wins.

Meanwhile our youngest son, Trent (also a Muay Thai fighter under temporary retirement due to an injury earlier in the year) has started up his own gymnasium, with two friends, in Darwin.

None of this has anything to do with the Cackleberry Farm other than to explain why I haven't been home a lot this month and for the lack of small acreage news. Besides, as you see, I get easily side-tracked once I begin to write and often go off in weird tangents.

Timber! A Tree Across the Driveway

As I mentioned earlier, the day after we arrived home from Brisbane, Kathy had to travel to Murgon to teach a weaving class for the CWA (Country Women's Association) for which she is a craft convenor. Five minutes after she left home I heard the car horn "beep." After a wild storm the previous night (which thankfully didn't hit while we were still on the road) A large tree had been uprooted and blown over across our only driveway.

Kathy asked me to grab the chainsaw and come with her so I could clear the roadway. Being the good husband I am :) I responded willingly, fuelling up the chainsaw before going with her to chop up the tree. I didn't want her to be late for her class, especially as she was the teacher, so I agreed to let her be on her way and I'd walk home. If you have read my hub "Take a Walk With Me" you'll be familiar with the length of my driveway. Anyway the fallen tree was located about 1 1/2 kilometres from the house..on foot, carrying a heavy chainsaw..piece of piss. I am an Aussie after all.

The good news is that we have a good supply of firewood already cut and ready for next winter.

Home on the Farm

Back on the farm one new chicken has hatched. Remember the the poor clucky hen who had been siting on the macadamia nuts? Well, the second egg I placed under her finally hatched. Hallelujah! She is now the proud mother of a healthy bouncing baby chick.

The previous three chickens to hatch are now almost full grown and very unique in appearance. Our poultry are such a mixed breed that no one can say they all look the same. Out of a total of thirteen, only three of the hen's are similar in appearance. They are a mix of White Leghorn, Ilsa Red, Pekin Bantam, and Silky..a very diverse looking flock.

The extreme heat effects the chickens as much, if not more, than the humans (at least we can escape inside to the air conditioning). They are really only active in the early morning hours and late afternoon. The rest of the time they are just sitting quietly wherever they can find some shade.

Having two roosters we have no need for an alarm clock on the Cackleberry Farm. They treat us to a wonderful rendition of "duelling cock-a-doodle-do" at sunrise each morning.

Some Pros and Cons of Rural Living

Because I haven't been home on the Cackleberry farm for any extended period this month, and due to some welcome rainfall followed by sunshine, I decided to mow as much of our two acre house block as I could while I had the chance.

Well, just my luck, the ride-on mower wouldn't start! It is a temperamental bugger and only kicks over when it's in the mood. Because of long periods without use over the winter months, due to the grass remaining dormant, I do have the battery connected to a solar panel that continuously trickle charges it (supposedly). So much for that. This time I had to resort to mowing as much as I could with the manual push mower. Yeah, more exercise for me!

Living on a rural property is great and some of the pros are:

However, wherever there are pros unfortunately, there also has to be cons.

Anyway, I'll try to start the ride-on again later today when the weather cools down. Maybe it will be in a better mood. Knowing my luck we will get a late afternoon storm and it will prevent me mowing anyway.

Getting away from the farm once again, last Saturday we drove to Toowoomba so that Kathy could pick up another spinning wheel (I think she has seven now). We couldn't pass this up as it was a "give away" and almost never used.

As usual however, our timing wasn't the best and we became stuck in the middle of nowhere for over an hour due to a car in front of us flipping over and blocking the single lane road. That was fun, or at least a talking point, and fortunately it appears that no one was killed or seriously hurt.

The spinning wheel has provided Kathy with a new project and it will keep her busy restoring it. She disassembled it yesterday, cleaned it, reglued the wheel, and painted it with primer/undercoat. She is still to decide how she will finish it off, but has mentioned trying to give it a "steam punk" theme. I can't wait to see the finished product. I have a very talented wife.

Sorry to disappoint the nature lovers among you (snake and arachnid fans at least) as I am not including pics of either in this hub. There hasn't been a snake in sight so far this month (touch wood as the weather is warming up) and although there have been spiders I haven't seen any big enough or scary enough to make my hair stand on end.

There have been a couple of geckos hiding behind wall prints and ready to ambush any unwary moths or bugs (I love geckos), and a small brown frog who appears around the kitchen sink at night and appears to have made his home in a flower vase during the day. Unfortunately I haven't managed to capture these on the camera yet. Maybe next hub in the series.

Wow! For a hub I envisaged having trouble filling this certainly surprised me. I really got carried away didn't I? In person it is hard to get a word out of me (unless discussing a subject I feel deeply passionate about) but as soon as I have a pen in my hand it's a totally different story. As a kid, and young adult working in an office I used to doodle all the time. If I picked up a pen or pencil and there was an exercise book, notebook, or desk blotter within reach it would soon be full of drawings. I have finally grown out of that (somewhat) and now I write words instead.

Well, th..th..that's all for now folks. Until next time, stay safe, and thank you for reading this all the Way to the end.