Dogs Parks are Great Places but Always Use Caution

Dog parks are perceived by a multitude of dog owners as an ideal place for dogs to release pent up energy and provide ample opportunities for dog to dog socialization. It is an unfortunate fact however, that often instead of being safe havens for dogs to interact with play mates, dog parks sometimes become the backdrop for unpleasant events. Indeed, gathering together in an enclosed space dogs of different ages, sizes, breeds, temperaments, and most of all, energy levels, may give rise to many unwanted altercations.

In order to be considered safe, special rules in dog parks must be enforced, but unfortunately often they are not, ultimately turning a dog park into a chaotic area with little or no set boundaries. For this reason, many dog owners have mixed feelings about dog parks while others have literally decided to ban their dogs from frequenting these places. It all ultimately sums up to keeping an eye on the events that unfold in dog parks and practicing caution, just as any parent would supervise their child in a playground. Following are some tips that may help owners ensure that the dog park remains a safe place for their dog to frequent.

Safety Tips for the Dog Park

Dog parks are ultimately designated areas in parks where owners are allowed to keep their dogs off leash for happy romps around the park with other playmates. Most dogs are eager to be set free to run around the park, especially those that have been closed all day at home and therefore are very appreciative of the opportunity, however this temporarily lack of control is what may cause problems to begin with. Tips to ensure safety are fundamental to ensure everybody is safe.

If your dog is on the edge and a bit fearful when approached by other dogs or if your dog turns aggressive when it has had enough, it is a good practice to avoid dog parks altogether until your dog has improved its social skills. Dogs parks should not be used as a means to rehabilitate fearful or aggressive dogs. Rather, have your dog socially interact with other dog in a controlled environment where it is most likely to succeed.

It cannot be emphasized enough the importance of keeping an eye on your dog and its interaction with other people and other dogs. Dog parks are often perceived by dog owners as a great place to interact with other dog owners or worse, to finish up reading a best seller book or take a quick nap, but what about watching the dog? It takes just a matter of seconds for a dog fight to start and a swift intervention at the first signs of trouble is often all it takes to prevent a ''discussion'' from exploiting into a nasty rumble.

Dogs communicate a whole lot though body language. If you are able to recognize swiftly signs of stress, fear, tension or aggression you may be able to intervene before things take a turn for the worse. There are many helpful books that may help you interpret canine body language, so you can intervene when things seem to deteriorate before escalating.

The more crowded the dog park the more out of control the dogs will be. Some dog parks post a limit of dogs that can be allowed at a time. It is crucial to respect these rules so to avoid problems. It is often a good practice to wait and take your dog when the areas are less packed. This will make it easier to control the dogs and keep an eye on them.

• Leave Toys and Treats at Home

It may be tempting to bring Rover's favorite toys to the park for a nice game of fetch, but since your dog will be mingling with other dogs it is a wise idea to save these toys for the yard. Dogs are generally instinctually possessive of toys and sharing is often not in their etiquette. A toy tossed in the wrong direction may give life to a serious scuffle. Treats may be nice rewards but once you get those tasty bites out you may be surrounded by a group of drooling dogs and potential fights.

• Know How To Break up a Fight

Re-directed aggression is always a big risk when trying to break up a fight among dogs. If you do not know how to separate fighting dogs safely, you can easily be bit by one of the two or more aroused dogs fighting. It is a good idea to keep on hand products that may help startle the dogs so they can be successfully separated. Direct Stop is an effective product that will deter the fighting dogs through the release of powerful and startling citronella spray.

The excited voices of children along with their quite swift movements may excite some dogs and even awaken instinctive prey drives in some cases. Some children may also frighten dogs or startle them with their unexpected movements which may cause dogs to become tense and defensive. Remember that accidents can happen in the blink of an eye.

Do not take your dog to the dog park if he is sick or just recovering from an illness. Avoid taking your dog if he has fleas, ticks, mites or contagious skin conditions, this would be unfair to other dogs and dog owners. Make sure as well that your dog is free of parasites and pick up after your dog since many parasites are transmitted through contact with stools. Avoid the park as well if your dog is coughing, kennel cough is a very contagious respiratory disorder in dogs.

• Keep your Female in Estrus Home

This may sound like common sense, but it can be amazingly surprising the amount of people that take their female in heat at dog parks. Some times owners may not be able to know when their female is ion heat or nearing their heat cycle, but the males will certainly know. At this point is best to head back home to prevent fights between males. And remember: it ultimately takes only a small distraction for puppies to be on the way 63 days later!

Perhaps the best tip is to realize that by taking your dog to the dog park your are accepting a certain degree of risk. There is no such thing as a perfect place where all dogs behave. Dogs are pack animals and they may all get along well, but at times, dogs may be assume threatening or aggressive postures towards other dogs that may elicit a fight. Monitor your dog and don't be naive thinking that dog parks are 100% safe places to be when they are not. 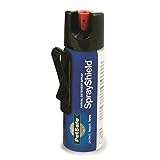 SprayShield Animal Deterrent Spray with Belt Clip
Directstop animal deterrent spray. Revolutionary citronella formula interrupts attacks by surprising and distracting animals with a powerful and unusual scent, giving the user valuable time to move to a safe place. Highly effective for dealing with low to medium level aggression, both inter-dog and dog-to-human. Easily fits into the pockets of joggers, dog walkers and family members who enjoy taking stalls around the neighborhood.
Buy Now