Dog clippers are great to have on hand whether for grooming or for emergencies. They tend to range from $100 to $200 for a decent pair. You may even consider just purchasing a pair of small men's clippers to have in case of small emergencies, but if you have a dog that you regularly shave or trim, you'll want to invest in a good pair of dog clippers.

If you plan on using electric razors to groom your dog, you need to make sure that you start working with the dog early on, otherwise, you may end up terrifying the dog later in life when you try to shave him with the razor.

There are a few quieter dog razors, but for the most part the majority of them have a decently loud buzz about them, which can start a dog that hasn't been properly socialized with electric razors.

Although, using a dog razor is relatively simple, if you have any problems you can usually ask a professional dog groomer for tips and help.

Andis is one of the top electric dog clipper brands. Their best dog razors include the UltraEdge and the AG clippers.

The AG clippers are, also, 2 speed clippers that work at 2,600 and 3,200 strokes per minute. These clippers work well for normal cuts and tend to take care of average grooming needs.

Give Your Dog a Mohawk with Electric Clippers 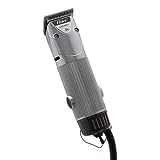 The other top brand commonly used by dog groomers is Oster. Common Oster razors include the Golden (one and two speed), Power Pro Cordless, Turbo, and PowerMax. All of these razors use use CryogenX blades that have AgION antimicrobial coating to prevent growth of bacteria, mold, and mildew. They, also, all feature the universal rotary motor that runs cooler to make handling more comfortable.

The Power Pro Cordless razor runs at 3,300 strokes per minute.

The Oster Turbo razor runs at 4,000 strokes per minute.

The PowerMax 2 speed clipper runs at 4,200 strokes per minute.