The Emperor angelfish is one of the three most popular "large" angelfish in the saltwater aquarium hobby. The other two are the queen angelfish (Holacanthus Ciliaris) and the french angelfish (Pomacanthus Paru).

They are stunning as juveniles or as adults. Juveniles have white concentric rings all over their deep blue bodies. It is the adults that really catch the eye of the onlooker. Its body is a dark blue/purple with horizontal yellow lines streaking towards its tail. It wears a black mask outlined by neon blue across its eyes.

It is a commonly found fish, hailing from throughout the Indo-Pacific.They are commonly offered on the market so you should have no trouble acquiring a specimen. Juvenile emperor angels set up cleaning stations in the wild where they are visited by other fish looking to rid themselves of parasites. This behaviour can be witnessed in captivity as you will see in a video further down. Juveniles start from around $60 while adults can go for more than $200. Very large show quality adults can fetch up to $400.

Gorgeous Emperor in a reef tank

All large angelfish have the potential to become really big bullies in captivity. The emperor angelfish is aggressive towards other large angels and very hostile towards fishes of the same species.

It generally leaves fishes from outside the Pomacanthidae family alone but might go after fishes a large or with the same overall body shape as itself.

But its still a big fish so it requires large tanks to truly do well. 150 gallons should be the bare minimum and a 200 gallon or larger tank is highly recommended.

Juvenile Emperor going to town on some corals 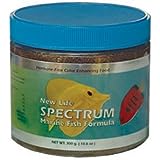 This fish is not reef safe. They are normally seen in fish only tanks as opposed to reef tanks and there's a good reason for that.

In the wild their diet is made up of corals, sponges, tunicates and algae. Try to avoid housing them in an aquarium full of corals as they can make short work of them.

Offer them a good variety of foods from meaty foods like mysis shrimp and krill to sheets of nori/seaweed. New Life Spectrum offers a very balanced pellet food as well.

Formula Two is a balanced food that is pretty god for your Emperor Angelfish. It contains a mix of seafood and an extra portion of algae for herbivorous fish. It is available in three forms, flake, pellet and frozen.

Angel Formula by Ocean Nutrition is by far the most complete food you can offer your Emperor Angelfish. This food was specifically designed to cater to the needs of large angelfish like the emperor, they contain a good mix of fresh algae, fresh seafood, vitamins and most importantly, marine sponges. Angel Formula only comes in frozen cubes.

With regards to seaweed sheets for your Emperor Angelfish, you could choose either sheets from companies catering to angelfish or you can always run down to your local supermarket and get some there. Depending on the brand they can be very cheap or very expensive.

Make sure you buy unflavoured/unspiced nori when shopping at the supermarket. Regular plain nori will do. Raw if you can find some. Attach the seaweed/nori to a clip and stick in onto the side of the aquarium.

The most detailed and comprehensive book the marine angelfish to date. No other book comes close. Covers all known species.