Feline Leukemia and the Heartbreak Litter

These are the orphans who taught me about Feline Leukemia - how present it is in the stray cat population, how hard it is to diagnose in young kittens, and how sudden and horrible the outcome can be. The HeartBreak Litter were tiny orphans and they were a mess. Their eyes were gunky; they were caked with mud and very young and no mother in sight. They were found in the back yard of a run down house. And were maybe 3 weeks old. In my experience with cat/kitten rescue, they were on the borderline of the age where successful bottle feeding is even possible plus they were sick. But I made up my mind to try to keep them alive.

Here they are, left to right, Simba, Rizzo, Lily, and Sylvia when they first arrived at my house.

Bottle feeding this young can be very time consuming. So with four it is very time demanding plus you have to feed every few hours. So for the next couple of weeks, this was my primary occupation.

There is no way to do bottle feeding without becoming bonded with the kittens unless you don't have a nurturing bone in your body. Of course I loved them by this time.

The beautiful baby above is Rizzo, the smallest of the litter. He had had worming medicine and eye medicine and looked good. Unfortunately he developed diahrrea and it became a really difficult problem to clear up. There was no question in my mind that he could easily die from dehydration if we didn't get on top of this problem. The vet tried several medicines.. I would say after about 4 weeks the diahrrea cleared up. When you manage to keep a kitten this small and sick alive and get it past a crisis, of course you are invested in that baby.

Out of the Woods?

By 8-10 weeks of age all four kittens were thriving and I thought we were out of the woods. They played and ate and acted like the kittens at their age should act. They were eating soft canned food and were off the bottle. They played and wrestled like all kittens. They saw me as mamma and in the picture above they are all on my lap. I spent as much time with them as possible.

I was the foster mom but the kittens were the responsibility of the local cat rescue. When the kittens were 12 weeks of age, the rescue took the kittens to be tested, vaccinated, and neutered/spayed at the Humane Society. Off my litter went with the volunteers doing the transporting. They were brought back to me by a board member. When the HUmane Society told her Rizzo was positive for Feline Leukemia, she didn't do what she usually did which was to have him euthanized. She knew how much I had invested in this baby and couldn't do it. The litter came back to my home. We immediately kept Rizzo separate and agreed to have the entire litter tested again in 4 more weeks.

According to UC-Davis Koret Shetler Medicine, the saliva test which this litter had is not reliable so should be followed up by an Elisha blood test. UC-Davis Koret Shelter Medicine states that the Elisha blood test itself is quite accurate, but not 100%. Cats and kittens can be transiently infected so it is possible that a cat will initially test positive for Feline Leukemia, and then recover and test negative at a later date.

We repeated the feline leukemia test four weeks later and Rizzo was positive again. But more heartached was to come. With this test Lily also tested positive. We had to separate her now and decided what to do with Rizzo since a second positive made it pretty clear he indeed had feline leukemia.

I began search for a home for Rizzo that already had a cat that had feline leukemia. I used all the connections I had and found one who changed her mind. Then I looked for rescues and sanctuaries. Fortunately I found a sanctuary 3 hours away who would give Feline Leukemia positive cats a home for life. It was run by a husband and wife. The husband was a veterinarian. I spoke to the wife and she said she had one room with already three feline leukemia positive cats and that Rizzo would not only have cat companions but she sat in there and read.

I was so relieved to have found little Rizzo a home because I couldn't keep him and continue to foster cats/kittens and didn't have the room to keep him separate from my own cats indefinitely. My husband took our donation, took final photos of Rizzo, put him a kennel and we headed out.

The sanctuary turned out to be a large farm they had bought to start a sanctuary. The husband was a vet and I knew the best care would be provided for Rizzo. It was clear from their website that this was a mission based on love and compassion and that they had saved and treated many animals for free.

The goodbye was hard because I didn't get to see Rizzo in his new room. They were too busy with an emergency and didn't want us to come in. I would have liked to hold him again but was not taking any chances by taking him out of the carrier so I said goodbye through the bars.

Like with all fosters I bonded strongly with, I had a good cry. "Without a hurt the heart is hollow -Fantastiks." The reward of saving an animal is worth any amount of pain.

Hoping Things Would be Fine

Simba who had always been the largest kitten and thriving. Was ready for adoption. So he went to a new home.

So two weeks after having Rizzo place, it was time to have the tree remaining kittens tested. Tragically Lily tested positive again.

UC-Davis Koret Shelter Medicine states that the blood test may also falsely identify recently infected cats as negative. This is why we tested the three kittens again because of the unreliability of the testing and according to UC-Davis Koret Shelter Medicine to be absolutely certain, cats must be tested 1-3 months after their last known exposure. They had all been exposed to Rizzo So we did the ELISHA blood test and Sylvia and Simba were again clear. but Lily was negative. The sanctuary couldn't take Lily so my husband and I decided to keep Lily separate in our bedroom. She was a loving quiet cat. Here is a picture of her at 8 months.The rescue arranged adoptions for the two healthy kittens Simba and Sylvia.

Why do I call this the heartbreak litter? I worked so hard to keep them alive when they were barely old enough to succeed with bottle feeding. Finding out that two of them had a fatal disease was very painful to me. Finding out for sure the two had Feline leukeumia was also heartbreaking because it was a long and dragged out process, with uncertainties along the way.. What happens next will convince you it was a "heartbreak litter." We had hoped Rizzo and Lily would have at least two good years of life. According to UC-Davis Koret Shelter Medicine infected kittens may have several years of good quality life before developing signs of disease and this is what we were hoping for for RIzzo and LIly

I did contact the sanctuary to see if they would take Lily also and didn't hear back and didn't hear. Lily got to be about 7 months old and my husband and I both loved her dearly and we spent a lot of time with her since she was isolated in our bedroom. We had a tall ladder in there for a repair, and Lily loved to zoom up and then cautiously come down. She was healthy and happy. Finally when I heard from the sanctuary, they had bad news for me. Rizzo one morning suddenly could hardly breathe and they had to put him down. This scared me and I decided to keep Lily with me. Here is Lily at 8 months of age.

After she became 8 months old, one morning I woke up and went to feed Lily. Both her eyes were pools of fluorescent green color. This change occurred overnight. We immediately took her to the vet. Like with Rizzo, the Leukemia caught up with her suddenly and irreparably. THe vet explained that her eyes wer dissolving and that she was suffering. It was time to say goodbye. My husband and eye both wept while he put her down. She is buried with my other dearly beloved animal friends.

Feline Leukemia is an airborne disease. It is contagious. People who let their cats roam free are risking their cats contracting the disease. Their cats could catch the leukemia and because the symptoms don't show at first they could spread the disease to their entire neighborhood. I am more inspired than ever to educate communities about cat diseases. I am also more convinced than ever that as long as Feline Leukemia and Feline Aids (FIV) exist it is essential to keep pet cats indoors and to do something about the feral population. Communities who do not have a humane plan to deal with their feral cat population are allowing this disease to continue and spread and cause suffering to innocent kittens and cats. There is a vaccine that will protect cats against Feline Leukemia. When I was fostering all my cats had this vaccine. Still the best deterrent is to keep them inside and only bring in new cats if they have been tested.

Please be sure to check out this article about another cat disease and my quest for a solution http://hildaspann.hubpages.com/hub/Cat-Eye-Herpes-How-It-Can-Be-Complicated

Throughout the country there are more and more sanctuaries saving space for FIV positive cats to live out their lives. A good example is Home for Life, the Animal Sanctuary of St. Croix in Minnesota. 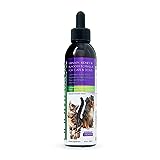