For those who don't know, chinchillas come from the Andes mountains in South America. They are considered an exotic animal and are known for their soft fur. I took care of chinchillas for four years. I read a lot about caring for them and eventually of the baby chinchillas that came later. I no longer have chinchillas, but I would like to share my tips for you, before you decide if owning a chinchilla is right for you.

1. Chinchillas Need A Lot Of Room

Chinchillas need a large cage, preferably one that is at least four feet tall, with a couple of shelves. The shelves should be on different levels, because chinchillas like to hop from shelf to shelf. If you have more than two chinchillas then you'll need a larger size cage.

Chinchillas also need room to run around and play. It is a good idea to have an enclosed room for them for when you let them out of their cage to play. They like to run and jump around, because they are active animals. There is an exercise ball made for chinchillas that gives them an opportunity to run.

Chinchillas need social interaction, either with one another, or with their owners. They too can get lonely. Every chinchilla has their own personality, just like every other pet. They are known to be skittish and not fond of cuddling, that's why it is important to bond with them at a young age. If you want two chinchillas, again it is a good idea to get them at the same time when they're young. Once they are grown they have a harder time welcoming a new chinchilla into their family.

4. Most Vets Do Not Specialize In Chinchillas

Because chinchillas are exotic animals it is hard to find a vet who specializes in caring for them. Chinchillas rarely get sick. Mine never did. If a chinchilla does get sick, a vet will treat them, but many vets will not neuter or spay them. So if you don't want your female chinchilla to keep having babies, you'll have to buy same-sex chinchillas. My female chinchilla got pregnant five times with two or three born in each litter.

Baby Chinchillas Are The Cutest!

My advice is to read all you can about caring for chinchillas. They are quite different than owning any other pet. They have special requirements, regarding the temperature of their environment, the way they groom themselves and their nutritional requirements. I don't want to discourage anyone who may be interested in having a chinchilla as a pet. They are unique, fun, lovable little creatures and they will give you enjoyment for many years. 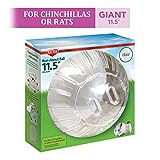 Have You Ever Owned A Chinchilla?