Rogue cat lover. Shelter kitty mom who learns by her teeny mistakes. Fortunately, they guide me with compassion for my human limitations.

Now, I am re-thinking having any in our house at all. That’s due to what I walked into when getting home from work.

Apparently (as Sherlock Holmes did so brilliantly, we are forced to deduce), there was a WILD cat party here this afternoon.

I entered the kitchen to find green flakes all over the floor. The two boy cats lounged, that’s the best word for it, amongst the detritus. Our matriarch tabby lolled in the next room. The evidence, the “smoking gun,” was a package of catnip on the floor, savagely ripped open in the middle. More trails of catnip sat on a kitchen counter beneath an open cabinet door.

And I mean ALL over

This Is Not Good 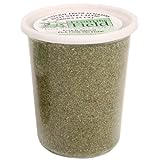 From The Field 6-Ounce Catnip Kitty Safe Stalkless Tub
Now I like having a thicker, claw-proof container for our catnip.
Buy Now

Trying to Piece It Together

The evidence wasn’t making sense to me. If they were “high on catnip,” the cats should have been whirling around the house like a clothes washer on final spin cycle. So, either the catnip was very stale or…..

MyGuy was home. Obviously, he had not been in the kitchen since this covert operation commenced. But, hadn’t he heard anything? With more deduction, we assume that when he returned home exhausted from an afternoon job, he collapsed semi-comatose in the TV room on the lower level. That was still his state when I arrived. On questioning, MyGuy recalled hearing “body slamming” upstairs, but our three cats are known to do this without the benefit of drugs. Thus, he tuned it out (his parenting style is much more laid back than mine.) Well, talk about a ruckus - this must have been a Lou Lou! So, by the time I came on the scene the felines were sated and exhausted, we guess.

You may ask, can our cat Skeeter (because we ALL know he was the instigator) open cabinet doors? As far as we know: not yet.

MyGuy often leaves kitchen cabinet doors open. I don’t know why. And, I also don't know why we bother to have cabinet doors. For un-rememberable reasons, I had stuffed a new catnip package in a different cabinet from usual - the one with tea and raisins and candy, instead of the cat food cabinet.. MyGuy probably used something from that upper cabinet at breakfast time, leaving the door open. Thus, the stage was set.

Can he detect catnip even though it is in a sealed, never-opened package. Apparently!

Can we continue with energetic Skeets prowling the kitchen countertops in search of opportunity? Absolutely not. (The other two older, staid cats save their forbidden prowling for times we are not present. Skeeter, however, has gotten away with bad behavior.)

Catnip Animal House by Our 3 Cats