How And Why I Got A Riding Mule

Ray and I got a new friend!

Rojo Is Just The Right Age And Size Riding Mule For Me!

I have had my little donkey, Ray, for a couple of years now and have thoroughly enjoyed having him. For a while, I had thoughts of training him to ride and worked on that some; however, he is really just too small in stature for me to ride comfortably. He is strong enough, but riding him just feels odd. He is far better suited to pulling a little cart, and I hope to be able to teach him how to do this sometime in the near future. In the meantime, I recently learned of a gentle riding mule seeking a home, and he perfectly suited my needs.

Rojo is a red mule between 15 and 20 years old He is very well trained and easy to ride. He stands about 13 hands high . A “hand” is a unit of measure specifically intended for measuring equines. It is the width of an average hand - about four inches. He is big enough to be comfortable but not so big as to be difficult to mount or scary to ride! I got him from local character called Mule Man who collects mules and has a small herd in a pasture outside of town.

Mule man had had Rojo for about four years but had never ridden him or done anything with him. In fact, he didn't even know the mule's name. I named him Rojo. Mule Man said that he had been given the mule by the family of a man who had bought the mule for his wife and then killed himself. How true this story is, I don't know. I do know that Rojo’s behavior suggests to me that at one time in his life, he was accustomed to being handled and worked with daily and that he has had some scary things happen in his life, too.

Being a small mule, Rojo was taking a lot of bullying from the other dozen or so mules in the pasture. They are all very big. When I first got him, he was flighty and skittish. He was difficult to catch and wouldn't hold still to be groomed. He was also head shy and hated to have to top of his head touched. After about 3 weeks of steady, gentle work I have been able to get him to trust me and stand for grooming. He is still a little anxious about having the top of his head touched, but this is improving day-by-day.

I took my time making friends with my new mule before riding.

When I first got Rojo, we focused on ground work and trust work. I sat with his feed dish in my lap and sang Flop Eared Mule to him while he ate. I groomed him thoroughly every day and took him on walks around town to familiarize him with the area. After a couple of months, I began riding him a little. My farrier loaned me an old Western saddle that was badly in need of a cleaning and oiling, and I spent quite a while on that. I put the saddle on Rojo several times and took him on walks. On Thanksgiving, I mounted up and rode him around his little pasture. He did just fine, but I have to say that was the most uncomfortable saddle I have ever sat in.

I mostly rode bareback or with an English saddle when I was a teenager, and knew that I would be more comfortable with an English saddle. I looked around online and located a man in a nearby town who refurbishes saddles as a hobby. I spoke with him and he said he had several nice English saddles and an odd assortment of accessories on hand. He only wanted $80 for a saddle. I made plans with my farrier, who is a good friend, to go visit this man, but unfortunately we had a big storm and long cold spell that prevented our trip. The photo above of Ray and Rojo in the snow was taken during this time.

A better look at the tack...

This is the bit I would like to have for Rojo... 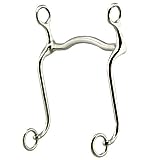 I found a great deal on an English saddle and bridle online!

On Cyber Monday I located a really good deal on an English tack kit online that included saddle, girth, stirrup leathers and irons and English headstall with reins. It was only $150 with free delivery. I got it from Saddles Online; however, Amazon offers the same package and it is shown here.

I was a little leery of ordering this set because I knew it must have been made in India. I had read mixed reviews about Indian tack. Some people love it and some people hate it. I really think it depends on where it was made in India. My online research indicates that there are several saddle manufacturers there.

My saddle and headstall arrived about ten days after I placed my order, and so far I am happy with them. They seem sturdy and well made. I will say that; even though this set comes with a girth, I should have ordered a shorter one when I ordered the saddle. The girth that came with it is canvas and it is 50" long, so it’s really too big for anything but a draft horse. It would probably fit one of those big mules Rojo used to live with.

The headstall didn’t come with a bit, but I happened to have a good bit on hand so did not have to buy one. It’s really better to select the bit specifically than go with a generic bit, anyway. I have my eye on the walking horse bit pictured here because I have found that Rojo seems to be gaited (more on that in another article). He has a really nice, comfortable fox trot that is easy to ride. This type of bit will encourage him to hold his head comfortably and perform that trot easily.

Tacking Up With English Saddle and Bridle

I took time and care getting my mule used to his new saddle.

After my saddle arrived, I spent quite a bit of time trying it on Rojo and taking him on walks with it. I had to go to a local saddlery and get a shorter girth. I found that the saddle seemed to fit him but slipped some when I tried to mount up, so I went online to seek out some solutions and found a video on saddling your horse that suggested crossing the billets for a better fit. I tried this and it worked like a charm. Unfortunately, I wasn't able to locate that video again but the one I did find is very thorough, clear and helpful. When the presenter fastens the billets, just imagine that she crosses the first and third billets rather than leaving them hanging straight.

On the day before Christmas I rode Rojo around his pasture again and was perfectly comfortable with the new saddle. He seemed a little confused by the English saddle at first and started out with both ears laid back, but in a few moments he perked one ear forward and kept the other one turned back a bit to listen to me, and I knew we were good to go. The saddle still shifts slightly in the back when I mount up, but I plan to get a tacky pad to remedy that. 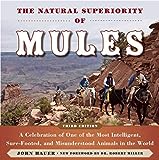 The Natural Superiority of Mules: A Celebration of One of the Most Intelligent, Sure-Footed, and Misunderstood Animals in the World
Buy Now

Donkeys, mules and horses are the recipe for happiness!

On New Year's Day, I took Rojo out for a long ride in a big field behind the local school. He did great, and we really had a good time. Having him is just a joy. Keeping equines and especially riding makes me feel more like my true self than I ever have at any other time in my adult life. I grew up with horses, but when I moved away from home at 18 I left them behind.

I didn't know how large a part of me they were and didn‘t realize that I had been living my life with something missing for several decades. Really having Rojo and Ray is the only thing I have truly been excited about or felt enthusiastic about in many years. I am thrilled to have them and enjoy every moment of time spent with them. They are my missing piece and an investment in happiness.