How Height Plays a Role in Avian Aggression

Is Your Parrot a Biting Bully?

Height and Aggressive Tendencies in the Companion Parrot

Height is a key element in a parrot's environment--one that can contribute to aggressive tendencies in the companion parrot.

Many parrots spend much of their time viewing the world around them from a dominant position. This can lead to aggressive behavior, such as lunging and/or biting.

The height at which a parrot interacts with those around it will influence how the bird responds to adults, children and other pets in the household.

Parrots seek to establish pecking order, even when part of their human "flock" and height plays a key role in how they will interact with those they come into contact with.

At times, owners unwittingly contribute to avian aggression by constructing stands or tree perches with perching spots high up. While it is ideal to give a parrot lots of room and multiple branches to climb on, care should be taken so that any stand or perch does not allow the bird to be in a position that is higher than its humans.

Smaller beaks can be sharper on the ends, so bites can be very painful, even if the bite is over a smaller area. A bite from a larger beak can be very dangerous because of the sheer crushing power of a large beak. Bones can be broken and areas severed.

If the parrot is large it may be housed in an equally large and roomy cage that, by its very design, may contribute to aggressive behavior. The perches inside the cage may be placed at the mid-to-upper level or the cage may include an external perch on its very top.

Unfortunately, from these high positions, the bird may reinforce its perceived dominance over lower "creatures" in its environment, biting at those who come up to the cage or who walk by it. The parrot may reach down and bite at an outstretched hand from someone in a subordinate position. Bites from both smaller and larger parrots can be incredibly painful and in some cases can do serious damage.

Fortunately, most modern larger parrot cages are designed so that they can be shortened. This can be facilitated by lowering the legs or actually removing them.

Homemade cages also present problems because most owners try to make these as large as possible. While it is important to give a parrot plenty of room, careful consideration should be given to the actual height of the perches placed inside the cage.

In sum: provide a roomy environment but one that fosters peaceful coexistence.

Walter was a beautiful large macaw that had been with his owner for 25 years. The owner lovingly built Walter a huge outdoor cage. When Walter became increasingly aggressive, I was called in to do a consult to see if we could pinpoint the trouble.

I recommended that the perches inside the cage be immediately lowered so that Walter would no longer be positioned above his owner's head. I strongly suggested that Walter be positioned to look up to his humans. The owner did not listen and dismissed my advice, in spite of his partner urging him to do so.

Some months later, when I stopped in to see Walter, he was nowhere in sight. We had gone down to the basement to look at some paintings. I backed up and the next thing I knew, I had a hole bitten clean through the skin between my thumb and forefinger! Walter had been placed on a chair. Because it was dark and I didn't know he was down there, I had invaded his space and he'd reacted to protect himself! Imagine how Walter felt with a huge shape backing into him in the dark. I wasn't mad at poor Walter, I was upset that the owners would place him into solitary confinement because of not knowing how to deal with him.

After we went back upstairs, I was told why Walter had been confined to the basement. The owners had placed a smaller indoor cage in a hallway close to the entrance door, which Walter manned and guarded, again perched on the top above the humans who passed by him. He had taken a chunk out of the wife's arm as she walked by his cage.

The story ended just as I had suspected it would. I heard that Walter became so unmanageable that the owner gave him away. I felt saddened. This could have been avoided had the owner had been willing to make adjustments and place Walter in a lower position, and had he taken other steps to reduce Walter's undesirable behaviors.

A Bite Can be Avoided by Positioning Yourself Higher

The Proof is in the Pudding

My Parrot, Muggles, Eagerly Steps up onto a Hand

Height factors are also relevant in relation to step-ups.

Bites can be avoided by paying attention to body position before requesting that a parrot steps onto a hand.

I knew a fellow who owned a big macaw. He allowed the bird to sit on his shoulder, without incident... until, one day, his parrot reached over and bit off part of his ear!

As he was telling me about this, and saying he couldn't understand why his bird had done this to him, the first thing I asked was, "Did someone approach or come up close to you, while the bird was still perched on your shoulder?" He looked surprised and said, "Yes, as a matter of fact."

On the Bad Side of a Beak

Shoulder Time and Overt or Displaced Aggression

Most parrots will try to creep up an arm and gain a spot on a shoulder or even on top of a head.

Many owners know this is not ideal but "cheat" a little. This is easy to do because of the bonds that are forged between human and bird.

A larger hook-bill should never be allowed shoulder time, a position where significant injury could be inflicted to its owner or someone else who approaches. As the bird reaches maturity, the potential for shoulder aggression escalates.

At other times, again dependent upon where a parrot is in relation to humans, it may act in an instinctual fashion because it is trying to protect itself. What may be perceived as aggression is its response to a situation it perceives as threatening. It has well been said that there are no bad birds, only "bad" humans. Owners who fail to understand their parrot's needs, their innate and instinctual behaviors, may unwittingly set the stage for undesired responses/outcomes.

Have you been bitten?

A beautiful bond can be created when owners recognize and respect the beautiful creatures they live with and take every step to ensure the environment their parrot lives in accommodates its needs and is one that fosters peaceful coexistence.

Parrots That Lose Their Homes

Each year, many parrots are given away or relinquished to shelters because owners, while meaning well, do not invest the time to learn how to address instinctual and behavioral issues. The onus is on the owner to foster peaceful coexistence with a companion parrot by understanding the significance of height factors and how these may play a role in development of aggressive behaviors. With proper care and handling, a parrot can become a delightful member of the family for many years to come. 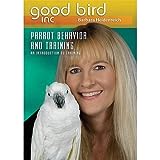 Certainly, aggression in a companion parrot may have more than one cause and height may be only one of many factors contributing to undesirable behaviors that need to be addressed and dealt with.

Avian behaviorism is an evolving field and theories change as to the "why" behind certain types of psittacine behavior. In recent years, conflicting theories have emerged about height and whether it is a factor in aggression. Having lived/worked with different species of parrots and noticing a remarkable difference in behavior, dependent upon positioning, I stand by my recommendations about height and how it can play a role.

Is Your Parrot Aggressive?