How to Care for a Senior Cat

Aging in cats is not a disease: it's a natural process

Thanks to the diligent care of loving pet owners along with the technological advances of veterinary medicine, cats are leading much healthier and longer lives. This is also attributed to the fact that many owners spay and neuter their cats and many cats are being kept as indoor only pets, significantly raising the cat's life expectancy.

Often owners erroneously portray aging in their cats as a sign of disease. Aging in reality is not a disease, rather it is a natural process. With routine wellness exams, cats may be helped in maintaining a good level of health while recognizing early warning signs before they become harder to manage. Many veterinarians suggest nowadays, a twice a year wellness exam ideally six months apart from each other.

This gives a good time frame to allow veterinarians to check for early signs of trouble before they progress. Geriatric blood tests are highly recommended during these wellness exams. In many cases, shots are not recommended after a certain age. Owners should consult with their veterinarian about excluding shots after their cat has reached a certain age.

Just as car owners perform more maintenance checks as their cars get old, owners of senior cats must try to keep up with these important exams in their feline friends.

Just as humans get grayer hair, more wrinkles and bouts of arthritis, senior pets develop a variety of signs suggesting they are aging. Following, are some evident and less evident physical and psychological changes observed in geriatric cats.

As cats age, owners may notice a change in their grooming habits. While once they cats used to spend a lot of time in keeping their fur soft and glossy, now their cat may refrain more and more from keeping up with their fur. Often, their coat will manifest this lack of care, becoming matted, dull and sometimes even smelly. Owners can help their feline friend keep up with their grooming, by lending a helping hand. Some cats suffering from artritis pain are unable to reach certain areas as they used to when they were younger.

Senior cats may reduce their water intake. This often results in a less elastic skin which becomes more prone to infections. Senior cats should be encouraged to drink more. It can help to place more water bowls around the home to remind the cat to drink. A water fountain may often entice finicky drinkers that look for the freshest water. Some cats will become dehydrated as a result of kidney disease, a common ailment of senior cats.

Just as humans, cats develop a feline version of Alzheimer's disease known as Feline Cognitive Dysfunction (FCD). Affected cats are often found wandering in the night and howling as they have a hard time finding their way and get disoriented. Some may forget where their litter box is and they may have accidents in the night. Turning furniture around may acerbate these episodes as the cat wanders in unfamiliar territory. These episodes can be reduced by administering a veterinary prescription medication known as Anipryl.

As cats age, their nails become quite brittle. Also because senior cats may not exercise much, their nails tend to get long fast requiring more often than usual nail trimmings. In some cases, their overgrown nails may embed into their paws causing infections and pain. A thorough inspection is recommended.

As cats age, they may also lose some hearing. A cat may get startled when pet suddenly or may not respond anymore to owners opening a can of tuna or calling their name. Cats with hear loss should not be kept outdoors as they may not be able to hear upcoming dangers such as a car or a dog.

Some senior cats develop a cloudy, hazy appearance in their eyes. In most cases, fortunately this does not affect the cat's vision. Cats however, as they age may develop high blood pressure which may cause sudden blindness because their retinas may detach. This sudden blindness may be reversible if the cat is taken to the vet promptly and administered blood pressure reducing medications.

Senior cats are often finicky cats. They may turn their nose away at what once was their favorite food. This can be due to a decreased sense of smell, since smell plays a big role in a cat's appetite. Sometimes warming up some canned food in the microwave may help release some smell that may entice the cat to eat. Boiling fish or chicken may also wake up a cat's sense of smell.

As cats age they are more vulnerable to dental decay. Their teeth may appear dark yellow or brown often accompanied by an unpleasant odor. Affected cats may appear to be grumpy at times, they may also paw at their mouth, have trouble eating kibble and drop some kibble on the floor as they eat. Dental cleanings are performed on senior cats, and owners often report significant behavior changes after ward, almost as if the cat gained back a few years.

Just as humans, cats get joint problems as well. Owners may see this when their cat no longer enjoys jumping up and down their once favorite high chair or is no longer visiting the window sill to do some bird watching. Some cats may even have difficulty getting in their litter box, choosing a more easier place to access. Because most cats are stiffer in the morning, providing a cozy bed for the night may help them wake up better. Warmed up beds may be extra helpful.

These abbreviations stand for polyuria and polidypsia which mean respectively increased urination and increased drinking. Of course, a cat that drinks more will consequently urinate more. The causes behind these two symptoms are often correlated to some common conditions found in senior cats such as kidney disease, diabetes and hyperthyroidism.

These are two opposite problems yet they are both common in cats. Obese cats should shed the extra pounds to avoid extra strain on joints and lower the chances of diabetes.A light exercise regimen may help. Some cats instead appear to become skinnier as they age. It is important to weigh senior cats once a month and report to the vet any subtle and progressive signs of weight loss. In some cases, these lost pounds an ounces may be indicative of an underlying condition such as kidney disease, cancer, diabetes, liver disease or hyperthyroidism. A scale showing accurate digital pounds and ounces is ideal.

It cannot be repeated enough the importance of keeping a close eye on senior cats to report any suspicious changes. It is thanks to these observations that many times cats can be found living with dignity at 16-17 years old and even 21 in some cases. The key to a long, healthy living cat is therefore, careful observation, routine wellness exams, exercise and a stress free, loving environment. 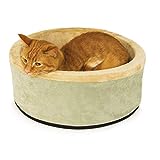 K&H Pet Products Thermo-Kitty Heated Cat Bed Small 16 Inches Sage/Tan
Give your favorite feline friend a cozy and warm place to nap all winter long inside this circular, heated cat bed. The bed plugs in to any standard household outlet and starts working instantly. Dual thermostats regulate temperature using only 4 watts for minimal power consumption. With Fifi lying on the thermostatically controlled bed, the she can bask in the perfect comfort of 102 degrees F; maintaining an ideal feline body temperature for healthier joints and deeper naps.
Buy Now