How to Curb Biting in Puppies

How Bite Inhibition is Taught in Dogs

When a puppy is in a litter with its mother and its litter mates, important life lessons are learned. One of the most important life lessons taught is bite inhibition. Bite inhibition is generally taught when puppies are between the age of five to eight weeks. For this reason, it is imperative to not separate puppies from their mom and litter mates earlier than eight weeks. Do it sooner, and you may end up with a puppy lacking good social skills and with little or no bite inhibition.

Upon watching a litter of puppies one can see how bite inhibition is taught. When a puppy is playing too rough with a litter mate, the litter mate will make a sharp ''yelp'' and withdraw from playing. The sharp yelp is the puppy's way to say ''Ouch! I will not play with you until you learn how to play nicely''. With this happening over and over, the biting puppy learns that in order to play, it must inhibit its bite and therefore bite softly, being careful not to injure.

The same lessons are taught by the mother, which often resorts to meaningful corrections that the puppy quickly understands, She may growl and bare her teeth to tell the puppy to stop and if the puppy does not get the message, she may put her paw on the pup and give a a symbolic correction to let the puppy firmly know that he has to put a stop to his rowdy behaviors. Once the puppy is still and shows signs submission, (ears laid back, averted eye contact, and an overall ''I give up'' posture) the puppy is let go. The puppy at this point, most likely will shake its fur, and shortly should go back to playing, but hopefully this time with a kinder approach.

How You Can Teach Bite Inhibition

Now, that your puppy is eight weeks old and is at home with you, he should come with these important life lessons in his mind. However, this will not be the case if the puppy was removed from the litter earlier than eight weeks, or if the puppy was an orphan. In these cases, you will need to be some extra effort to make up for all the time this puppy has lost in being taught these important lessons.

If you got your puppy at eight weeks, he will have learned the basics of bite inhibition, but now he will need to refine them with you. Humans have a more sensitive skin than puppies, and therefore the puppy now must learn that not only he has to apply his bite inhibition with humans as well, but also be even more kind. It therefore helps to apply the same life lessons its mom and litter mates applied in a similar way.

So let's say puppy comes near you and nips your hands, you will say a loud ''awrrp''! like it really hurt bad, and suddenly withdraw playing by turning your back to the puppy and become still as a statue. Make sure your ''awrrp'' so loud and sudden that the puppy will remain surprised and startled stopping the behavior. When the puppy stops nipping, quickly give your puppy a toy to re-direct its nipping somewhere else, explains animal behaviorist Patricia McConnell. This will teach your dog that biting you is no fun and that the toy instead is. Repeat multiple times until your puppy grasps the concept.

If your puppy still engages in biting, then make the ''Awrrp'' noise and leave the room suddenly. Your puppy will soon learn that upon biting he loses his favorite playmate and it is no longer fun.

Your puppy is not acting aggressively upon biting, but is simply playing a little bit too rowdy. Some puppies can be rambunctious, and sometimes obnoxious in their behaviors. They need to be taught calmer behaviors and that upon acting rowdy all play and attention suddenly comes to a halt.

A main problem encountered in nipping puppies is that upon nipping, the owners instinctively draw the hand back which in a puppy's mind this is an invitation to play. This often incites the puppy in more nipping and biting. 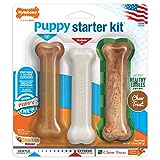 Some Tricks of the Trade

So cute, but so nippy!