How to Keep Your Dog Safe in Your Garden

Whether you use your garden to just relax on the patio or whether you have a green thumb and love to engage in garden activities, very likely your canine companion will follow you, eager to spend some time exploring. As quiet and safe as a garden may seem, there are many unexpected dangers dogs may be exposed to when engaging in their favorite outdoor activities. Creating a dog friendly garden that is also a safe haven for four legged friends is a must so to ensure countless hours of relaxation and priceless peace of mind.

How to Create a Dog Friendly Garden

Dog owners are often surprised to learn how many dangers may be hiding in their gardens. It is unfortunate that often owners notice these to late, once their dogs have fallen to victim to accidents that could have been avoided. From, the choice of fertilizers to the use of the proper types of mulch, creating a dog friendly garden is a top priority for all dog loving souls.

• Avoid these Types of Mulch

Cedar mulch is one of the most common types of organic mulches used for landscaping gardens and parks. Among its main qualities is the fact that it is organic, slow to decompose, repels insects and has an appealing natural wood color. However, according to the ASPCA, due to its presence of oils and resins, when ingested in large quantities, cedar mulch along with pine, spruce and fir mulch, may cause gastrointestinal problems and even minor central nervous system depression. Cocoa bean shell mulch as well, is a mulch to keep dogs away from since it is known to produce symptoms similar to those of chocolate poisoning in dogs.

While several lawn fertilizers are generally of low toxicity, there are many products that can contain very high concentrations of iron or added toxic products such as herbicides and pesticides. Many lawn fertilizer products as a precaution recommend watering after each application. Others might suggest instead to allow the lawn to thoroughly dry before allowing pets on it. Toxicity from lawn fertilizer chemicals may occur from skin absorption or from ingestion. Signs of toxicity are as follows: skin irritations, drooling, diarrhea and vomiting episodes, seizures or other central nervous system disorders, and in severe cases, even death. The best option to ensure the safety of your four legged friend is to use organic lawn fertilizers labeled safe to use on pets.

As much as garden lovers want to get rid of unwanted critters crawling on patios and decks or ruining flower beds, baits should be kept out of a dog's reach. Gopher, mole, and vermin baits are known to be highly toxic since many times they contain strychnine, a greatly poisonous alkaloid, according to Dawn Ruben, DVM. Snail and slug baits are quite dangerous as well, and can cause serious and potentially fatal tremors and seizures.

Dog owners who own a garden featuring beautiful ponds must be aware of the dangers of blue algae. Blue Algae typically develops in still waters, when in the warmer months, they bloom, creating a very powerful toxin that causes the water to turn either blue, pea soup green, red, brown, or worse, develop a typical surface scum with often has an unpleasant musty odor. Dogs who ingest water rich with blue algae or lick their fur after swimming in such waters, develop the following symptoms: nausea, bloody diarrhea, pale gums, skin or eye irritations, convulsions and, in severe cases, even death within minutes. The toxic blooms typically appear in the late summer or early fall but may appear at other times of the year in warm climates, according to APDT.

There are a multitude of poisonous plants that may cause serious illness and even death if consumed by inquisitive dogs. Safely fencing out some areas, may be a good idea if you must grow flowers that are on the toxic side. It is good practice to always keep handy a list of toxic and not toxic plants so to make the best choices when it comes to creating a dog friendly garden. The ASPCA provides an extensive list accompanied by pictures for easy identification, of all toxic plants all dog owners should be aware of.

Gardens may harbor a variety of unwanted bugs and parasites. It is a good idea to put dogs on flea and tick products when the warm months are around the corner. The best and safest one are those sold by veterinarians with a prescription. Areas prone to heartwormdisease requires dogs to be put on heartworm preventatives either year round or during certain times of the year, when the mosquito population is at highest levels.

• Have a Sturdy Fence

Of course,  in order to keep your canine companion safe you must offer a safe, escape proof enclosure. Inspect your fence routinely to identify any weak points or gaps. Make sure your dog does not dig its way out or jumps over the fence. Some dogs can get quite creative, especially when dealing with intact  male dogs trying to reach a female in estrus.

As seen, there are a multitude of dangers out there, but knowledgeable dog owners are one step ahead because they know that knowledge is power. Always keep an eye on your dog's whereabouts and know how to stop your dog in his tracks before getting into trouble. The ''leave it'' and ''drop it'' commands are something all dogs should have in their vocabulary in order to prevent accidents from happening in the first place. Enjoy your garden and ensure you make it a happy place for your canine companion. 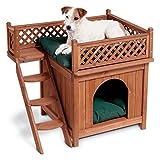 Merry Pet The Mansion Wood Pet House, Large
From the sturdy craftsmanship to the stylish touch of a chimney, this large model is perfect for medium to large sized dogs. The amply sized house comes complete with a spacious open-aired front porch surrounded by beautiful latticework, to allow your dog both warmth and comfort. This house is especially designed with a raised base to help keep your pet dry. It also offers a window covered by downward sloping horizontal shades to allow for ventilation, while keeping out the sun and rain.
Buy Now