How to Keep a Cat Calm in its Carrier

Cat owners seem to never learn... Is it so easy to be outsmarted in cleverness by their uneducated family cat? Yet, it seems to happen all the time. And what makes it worse of all, is that cats seem to resort to special hiding places that are often a well kept secret until that cat carrier is taken out. No, your cat will very likely not be under the bed as usual, and no neither under the couch. He certainly has his secret place to resort to, in such emergency cases!

So what can be done to avoid such scenarios from happening? There are various options to resort to in order to keep cats calm before putting them in the carrier and hopefully remain calm during the whole trip.

This is a feline well kept secret. If you keep the carrier out all the time, most cats will get used to it, sleep in it and even rub their cheeks on it releasing pheromones which turns the carrier into their possession. In other words, the carrier turns into a normal piece of furniture, with your cat's smell on it that makes it familiar.

You don't need to keep it in the your living room and turn it into a conversation piece. You can keep in any room where your cat has access to it. Make it particularly comfortable with a nice blanket and some cat nip toys. Very likely, your cat may even decide to move into it and turn it into her official living quarters!

Feliway is a special product meant to replace those natural pheromones cats which release to make objects familiar as mark territory. This product may be plugged in as a diffuser to release pheromones in your home or it may be sprayed on various surface making it a good tool to use in order to make that carrier feel familiar even if taken out of the cat's familiar areas.

-Get Kitty Used to the Car

Many times, kitty may care less about the carrier but rather may dread the car ride. Cats should be ideally taught from an early age not to fear the car. Taking kitty along for short drives around the block destination nowhere may help kitty get over the fear of going to unpleasant places like the vet's. Make sure to always end the trip if possible on a positive note by giving a treat, praising and petting or letting the kitty play with a string.

Cats that get motion sick easily benefit from desensitization (being on frequent car drives) and if necessary, by administering vet approved sedatives or anti-nausea products.

Every now and then, organize a trip around your living room. Just let your kitty go in the carrier by enticing her with a string, close her in and take her around the home right before meals. After the ride, praise calm behaviors by opening the cage and serving kitty's favorite meal. If done frequently, kitty will learn to not to dread the carrier much.

As seen, cats can be accustomed to their worst enemy if given the opportunity. While most cats however, dislike the carrier because it often means getting out of familiar territory, the above tips may help cats accept the carrier better perhaps without resorting to hiding in the most unbelievable places. 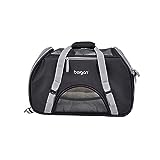 Bergan, Comfort Carrier, Large, Black
Bergan Pet Carriers are not only comfortable for your pet, but also distinctly sophisticated. The Comfort Carrier is a zippered opening that allows you to comfort your pet during travel. Carry your pet with confidence in this Bergan soft-sided carrier.
Buy Now