The Science Behind Dog Training: Learning Theory for Dog Owners

1) Dissecting the basics on how to train your dog

2) The ABC's of Dog Training

3) The 4 Quadrants of Dog Training

4) Choosing the Best Quadrants to Train Your Dog

Dissecting the Basics of How to Train a Dog

Trying to learn how to train a dog? Dog training isn't as easy as thought, which is why many dog owners need the assistance of a dog trainer. It takes patience, good timing, skill and some dirty secrets that you won't likely find online on the average website or video. This article is not meant to teach you how to train your dog overnight. If it were that easy, dog trainers wouldn't hold 8 week classes and they wouldn't study for many years and attend events to continue improving their education and skills (hopefully!). This article is meant to introduce you to how dogs learn and how you can reap the rewards of using the less intrusive methods avaialble out there so you and your dog can have a fun learning experience and look forward to more training sessions.

In this article, after taking a glimpse at learning theory, we will be looking at force-free, reward-based training techniques that will open the lines of communication between you and your dog and increase the bond. The goal is increasing your dog's motivation so he's open and eager to learn. Because there's no fear or intimidation involved in these techniques, your dog's cognitive functions will be fully operational which will make him receptive to learning. Before proceeding, it's important to emphasize something that many dog owners aren't aware of. Dog training is for life! Don't expect to go to classes and come home with a fully trained dog. Don't expect to teach a skill and then slack off. From when your dog is born, your dog is in a constant state of learning, which goes both ways, meaning your dog is always learning and that includes good things, but even bad things-- if you allow that to happen. So make sure you're committed to start training, maintain training and continue training throughout your dog's life.

Pulling behavior is reinforcing for dogs!

The ABC'S of Dog Training

What information tells the dog he's done a good job? What makes a dog perform a behavior? What factor makes a dog decide if it worthy or not to respond to a command? Science-based training goes in depth so you can understand the science behind learning and animal behavior. First off, what's learning? Learning is a change in behavior resulting from experience and/or practice. In order to learn, your dog will have to become "operational"by practicing repeatedly. Practice makes perfect, so the more your dog rehearses the behavior, the better he'll get at performing it. Here's a rundown on the ABC's of dog training, a look at what exactly happens when we're teaching a dog to perform a behavior and all its intrinsic dynamics. The term "ABC" isn't casual, each letter stands for a key component of learning.

A stands for Antecedents

As the name implies, an antecedent is what happens before a behavior. Whether you are training your dog or your dog behaves in certain ways, there's always something starting the behavior. In dog training, we're mostly talking about cues, verbal commands, signals. For example. telling your dog to sit is an antecedent because your dog responds to it by sitting. In behavior modification, we're mostly talking about triggers, environmental stimuli. For example, the noise of the mailman arriving is an antecedent since your dog comes running to bark when he hears it. Sometimes, behavior doesn't occur as a response to a stimuli in the environment, but an internal stimuli. Your dog may therefore walk towards his water bowl because he feels thirst or growl because he feels pain. When a behavior responds reliably and consistently to a specific antecedent, it's said to be under stimulus control.

B stands for Behavior

This is the way your dog responds to a cue, trigger or internal or external stimulus. Because trained behavior is the result of learning, if you haven't taught what you want from your dog, the antecedent won't work. Try telling a dog who has never been trained to lie down. Most likely, the dog will look at you wondering what you want. Try looking at your dog's behaviors during the day and guessing what antecedents were at play? What antecedents are behind your dog's barking, running and jumping?

Consequence happens after the behavior. Here we're talking about cause and effect. Behaviors often have a driving force. When you see your dog behaving in a certain way what is he getting out of it? What keeps the behavior alive? Consider that behaviors that repeat often have a history of some sort of advantage. If your dog pulls on the leash, it's likely because by doing so he's closer to a bush he so badly wants to smell, if your dog snaps when you touch a wound, he's trying to protect himself from the pain. At the same time, behaviors can be manipulated by creating unpleasant consequences. Unpleasant consequences often decrease behaviors. If your dog goes visit a skunk and gets sprayed, next time he may not get close anymore. If your dog jumps on you and you leave the room when he does, he may reduce his jumping behavior if he likes being around you. Consequences therefore may reinforce behavior and make it stronger, or may reduce behavior and weaken it. This bring us to the real core of learning theory, the 4 quadrants of dog training that we'll see in the next chapter.

The Four Quadrants of Dog Training

As mentioned, consequences make dog behavior more likely or less likely to happen. In dog training, there are 2 outcomes of behavior: the behavior is either rewarded (reinforced) or suppressed (punished), this can be accomplished in 4 ways. Training dogs to learn new behaviors falls under operant conditioning and B.F Skinner studied this extensively by training rats to perform behaviors in his laboratory which is why he's often referred to as the father of operant conditioning. Let's take a look at some basics.

According to Edward Thorndike any behavior that is followed by pleasant consequences is likely to be repeated. Now, what's reinforcing is up to your dog, not up to you! If you think scolding your dog is a good way to make your dog stop barking at you, consider that if your dog was alone all day and is dying for every bit of attention, even scolding can be reinforcing to an attention- seeking dog.

Positive reinforcement: dog behavior is rewarded by adding something your dog perceives as pleasant. When a behavior is successfully rewarded, it becomes more powerful and tends to repeat in time. In the most simplest example: if every time your dog sits he gets a cookie, generally, with time he'll sit more and more when you ask him to.

Negative Reinforcement: dog behavior is rewarded by removing something your dog perceives as unpleasant. Again,when a behavior is rewarded it becomes more powerful and tends to repeat in time. If you release tension from the leash when your dog walks besides you, chances are, you'll reinforce the behavior of heeling by your side.

Thorndike's law of effect also says "any behavior followed by unpleasant consequences is likely to be stopped." Again, as in reinforcement, it's up to your dog to establish what's unpleasant, not you. So if you think that by removing yourself from a room when your dog jumps on you is unpleasant to your dog, consider that for some dogs isolation can be fun and exhilirating as they get to do what they want if you're an oppressive type of dog owner.

Positive punishment. Dog behavior is punished by adding something the dog perceives as unpleasant. If your dog hates water, he may stop jumping on the counters if every time he does so, you spray him with water. When a behavior is successfully punished it weakens and even extinguishes over time

Negative Punishment. Dog behavior is punished by removing something your dog perceives as pleasant. If your dog was alone all day and the moment he jumps on you to greet you, you leave, his jumping behavior may weaken over time if he really wants to be with you.

So here you have it, four ways behaviors in dogs are reinforced and punished. With this in hand, you may think you have the keys to training any dog. However, things aren't always that simple. Dogs aren't mechanical beings that obey like robots, they have emotions too. If you think any dog will obey once you reward with a cookie, you're going to have a heck of a hard time. This is an article explaining several reasons: why dogs may not listen to you.

It's important to realize that dogs also learn through associations, through classical conditioning, which was studied extensively by Pavlov. Since operant and classical conditioning often mingle, there's a famous saying among trainers " Pavlov is always sitting on your shoulder." We'll dedicate a whole article on that pretty soon. Next, we'll take a look at the two quadrants you want to use if you want a dog that's eager to learn and happy.

A person who has been punished is not less inclined to behave in a given way; at best, he learns how to avoid punishment.

A Great Book for Dog Owners and Trainers 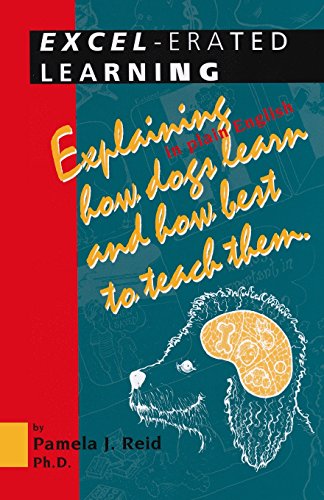 Excel-erated Learning: Explaining in plain English how dogs learn and how best to teach them
Buy Now

Choosing the Best Quadrants to Train Your Dog

Now that we have taken a look at learning theory, we will choose the quadrants that will motivate your dog and make training a fun, rewarding experience. Gentle, force-free dog training has consequences, the only difference from aversion-based training is that the consequences aren't harsh or based on aversion.

Also, if you find yourself using negative punishment often, ask yourself if your timing is right and whether you are providing your dog with clear instructions and feedback. In school, if a student keeps failing tests, the teachers must wonder if she's actually explaining things well, the same goes to teaching dogs!

Now that we know which quadrants work best if you want to adhere to a force -free, fun training method, it's time to start applying all the principles we have learned into training our dogs through some fun techniques. Since we have now seen the theoretical side of training, next, we're going to shift to the practical side of training where your dog becomes fully operational. We'll be dedicating a new article for that. Stay tuned for the next article on training your dog and making it fun!

Alexadry© all rights reserved do not copy.