How to Treat Heatstroke in Dogs

Dogs should never be left in hot cars unattended!

Heatstroke is a medical emergency in dogs which can be potentially fatal, treatment therefore, should not be delayed. Dogs are particularly prone to heatstroke because unlike humans, they are not equipped with the best cooling system, rather they are unable to sweat (other than through their foot pads) and rely on panting to absorb cool air while removing warm air. Trouble often arises when the temperatures in the environment are very close to the dog's internal temperature causing their cooling system to no longer be efficient as it is supposed to be. This is when heat stroke takes place.

Causes of Heat Stroke in Dogs

The likelihood of heatstroke arising increases when the dog is exposed to certain predisposing factors. Owners therefore, should lower the chances of their dog developing heat stroke by avoiding the following scenarios:

-Keeping the dog unattended in a vehicle on a hot day

-Leaving a dog on hot surfaces such as asphalt or concrete

There are also predisposing factors in dogs that make dogs more prone than others in developing heat stroke such as :

-Belonging to a Brachycephalic breed such as Pugs, Bulldogs, Boxers and Pekingese

Symptoms of Heat Stroke in Dogs

Heatstroke arises when the dog's rectal temperature measures over 104 degrees. A normal dog's temperature ranges between 99.5 to 102.5. Dogs affected by heatstroke develop the following symptoms:

- The presence of Petechiae, small pinpoint bleeding under the skin

*Dogs must be monitored as well for a serious condition known as laryngeal edema, a condition caused by excessive panting where the larynx swells possibly turning life threatening if the dog's airway becomes obstructed. Affected dogs will develop a typical stridor, become cyanotic and be unable to breath.

As the heat stroke progresses symptoms of shock set in:

At this point, the dog may collapse, have seizures, go into coma ad eventually succumb.

Treatment of Heatstroke in dogs

Affected dogs must be cooled done rapidly and in the correct way. They must be removed from the heat and placed in a cool area, preferably where a fan or air conditioner is running. The temperature should be taken rectally.

According to Dr. Debra Primovic. in an article for PetPlace "Mildly increased temperature (less than 105 F) may only require rest, a fan to increase air circulation, fresh water to drink and careful observation. Temperatures of 105 to 107 F should be hospitalized on intravenous fluids and other medications.''

Dogs with temperatures above 104 degrees according to the Dog Owner's Veterinarian handbook should be immersed in a tub with cool water (never icy water) for up to two minutes. Cool packs may be helpful as well in mild cases and can be applied to the groin area. Paws may be wiped with cool water. The temperature should continue to be monitored until the safer zone of 103 degrees is reached. Once below 103 degrees, the dog should be dried carefully.

All dogs victims of heatstroke should seek veterinary treatment because of the risk of complications that may arise right away or be delayed. Serious complications encompass: laryngeal edema, kidney failure, seizures, irregular heartbeats and spontaneous bleeding. 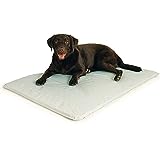 K&H Pet Products Cool Bed III Cooling Dog Bed Large Gray 32" x 44"
We're now keeping pets cooler than ever with the new, Cool Bed III. No electricity is required to operate the Cool bed III and these beds are attractively designed and allow a cool spot for dogs. Simply add the recommended amount of water through the easy fill cap and burp with the new easy air adjustment valve. Our unique Cool Core diverts the liquid better than ever throughout the bed for advanced cooling power. The new nylon/vinyl exterior is tougher than ever!! Being extremely affordable, the Cool bed III is the choice for any dog owner looking to offer their pet a comfy, dry, cool place to relax. Recommended for indoor and outdoor use.
Buy Now