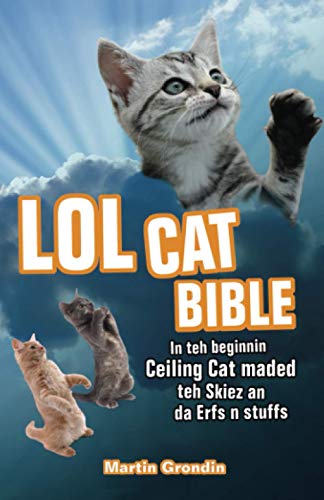 In the beginning there was ceiling cat!

Lolcats got their start sometime in 2005. As one of the more popular and accessible memes a lot has been said about them already, but I’d thought I’d give a quick overview about where they come from and what they mean.

Lolcats began circulating first amongst the big internet forums like Something Awful and the imageboards like 4chan. But it was 4chan which skyrocketed them to popularity through the institution of ‘Caturday.’ Every Saturday, it used to be common for users to post their favourite cat image macros, whether original or copied. Image macros are simply pictures with text overlain on top. Caturday was notable in 4chan because it was a departure from the typical bullying, internet vandalism, negativism and gore that the board is famous for. Anti-social internet nerds called a temporary truce in order to post cute pictures of fluffy animals saying silly things.

Sometime in 2006, lolcats, (not yet called that at this time) spread beyond 4chan and came to the attention of Eric Nakagawa, future founder of icanhascheezburger.com. He saw the eponymous picture of “Happycat” and his delight for cheeseburgers and laughed so hard he decided to make a website about it. The icanhascheezburger website first compiled some of the best funny cat photos out there, but then, notably, also included within it a function which allowed anybody to upload a picture of a cat and automatically add text to it. This feature took the creation of lolcats away from photoshop nerds and brought it within in the reach of the average, stay-at-home-mom. There's even a tutorial hub out there to teach people how to make lolcats. Thus commercialising and popularising the images, taking it out of the realm of simple internet meme, and into an actual, sustainable part of popular culture.

4chan, seeing their creation taken away (how does the old adage go: once things become popular, they stop being cool). They rejected the term “lol cat,” which is a Nakagawa-ism and resented their creation being used to make regular people happy. These days, Caturday is still in effect, but spoilsports will include pictures of dead cats as well, to ruin the fun, and subvert the meme.

As to the lolcat grammar, its generally a sort of pidgin English with a few variations. To speak the language, first, shorten words, then replace s’s with z’s. Do everything you can to misspell words. Throw away everything you know about subject verb agreement and viola: you can speak just like a cat. A more comprehensive guide can be found at the lolcat bible project.

And the big question: which picture started the trend in the first place, no one really knows for sure. Happy cat with his cheeseburger is generally considered the first to have gained widespread recognition, and ceiling cat holds a special place in many hearts as being one of the first, funniest (and almost deified) figure in the lolcat movement. Of course the real first lolcat could be said to be one from the early 1900's postcards of Harry Whittier Frees featuring cats dressed up as people with captions below them. But nobody really thinks this.

Many lol cat enthusiasts amuse themselves by creating an imaginary mythos to help explain the world of cats and how it came about. Ceiling cat is God. Long cat is Jesus and Basement cat is the representation of the devil. Basement cat leads you into sin and Ceiling cat gives you redemption

To show how popular lolcats have become, they’ve even started making songs and videos of them. I don’t want to take sides in the “popularisation has ruined them” debate, but watching this video, I really don’t know. You have to watch it for yourself and judge whether its possible to take something like this too far. I like filk as much as the next guy but…

And now, what you've all been waiting for, a little sampling of some of the lolcat macros I've saved over the years. These are my favourite. Please Enjoy